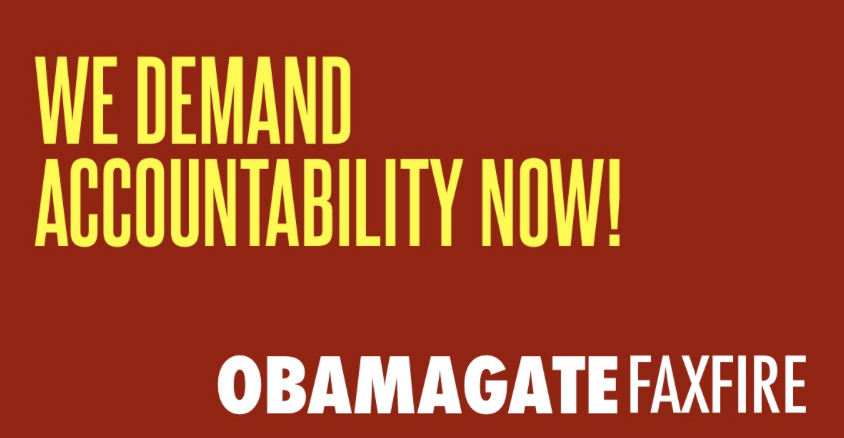 Media coverage of ObamaGate has taken a back seat recently to rioting, looting and tearing down monuments. The lingering threat of COVID-19 has also given left-leaning news organizations excuses not to cover a scandal that President Trump insists "makes Watergate look small time!"

But information came to light this week indicating that President Obama AND Vice President Joe Biden both knew the FBI was investigating a member of President-elect Trump's transition team. In fact, according to meeting notes from fired former FBI agent Peter Strzok, both men played an active role in orchestrating the case against incoming national security advisor, Gen. Michael Flynn. The Federalist reports:

The handwritten notes, which were first disclosed in a federal court filing made by the Department of Justice on Tuesday, show President Obama himself personally directed former FBI Director James Comey and former Deputy Attorney General Sally Yates to investigate Flynn for having routine phone calls with a Russian counterpart. He also suggests they withhold information from President Trump and his key national security figures.

Below is more on the notes, reportedly from the Department of Justice, that former Secret Service agent and conservative podcaster Dan Bongino posted on Twitter this week:

Strzok’s notes believed to be of January 4th, 2017, reveal that former President Obama, James Comey, Sally Yates, Joe Biden, and apparently Susan Rice discussed the transcripts of Flynn's calls and how to proceed against him. Mr. Obama himself directed that "the right people" investigate General Flynn. This caused former FBI Director Comey to acknowledge the obvious: General Flynn's phone calls with Ambassador Kislyak "appeared legit." According to Strzok’s notes, it appears that Vice President Biden personally raised the idea of [charging Flynn under] the Logan Act.

This is outrageous! Just 16 days before what is supposed to be a peaceful transition of power, members of the outgoing administration are orchestrating a bogus, federal investigation into a member of the incoming administration.

What's worse is that it didn't stop with Flynn. President Trump and the American people were forced to endure two years of the Russia-collusion hoax -- that cost millions of taxpayer dollars -- because of what started under Obama and his minions!

Sen. Lindsey Graham (R-SC), chairman of the powerful Senate Judiciary Committee, has "subpoena power," which authorizes him to call witnesses for ObamaGate hearings. Issuing subpoenas to compel testimony from those allegedly involved may be the only way to root out corruption that took place under the former president.

In May, Graham shared a list of 53 Obama-era officials he wants to testify. The senior Senator from South Carolina promised again this week to "get to the bottom" of what looks like a "soft" coup d'etat against President Trump. Graham's proposed subpoena list reads like a "Who's Who" from the previous administration.

It's time for grassroots patriots to make their voices heard and urge Graham, along with his fellow GOP Senators on the Judiciary Committee, to hold the Obama administration accountable. Click here or on the banner below to immediately send personalized "Expose ObamaGate" faxes to your two Senators, Representative and EVERY GOP member of the committee for just $15:

Conservatives have been waiting for three years to get to the bottom of the highly partisan and utterly baseless Russia-hoax Witch Hunt. Pro-Trump patriots must make their voices heard by demanding accountability today!

For just $15, you can instantly fax EVERY Republican Senator on the Judiciary Committee, as well as your two Senators, your Representative, Graham AND Senate Majority Leader Mitch McConnell (R-KY). Demand GOP Senators "Expose ObamaGate"! Click here or on the banner below to send your personalized faxes to Capitol Hill now:

Thanks, in advance, for taking immediate action.

P.S. Grassroots Americans who support President Trump can reach into Capitol Hill offices, right now, to call on GOP members of the Senate Judiciary Committee to expose ObamaGate. Please go here to fax now and demand the truth about the "soft coup" against America's Commander-in-Chief: