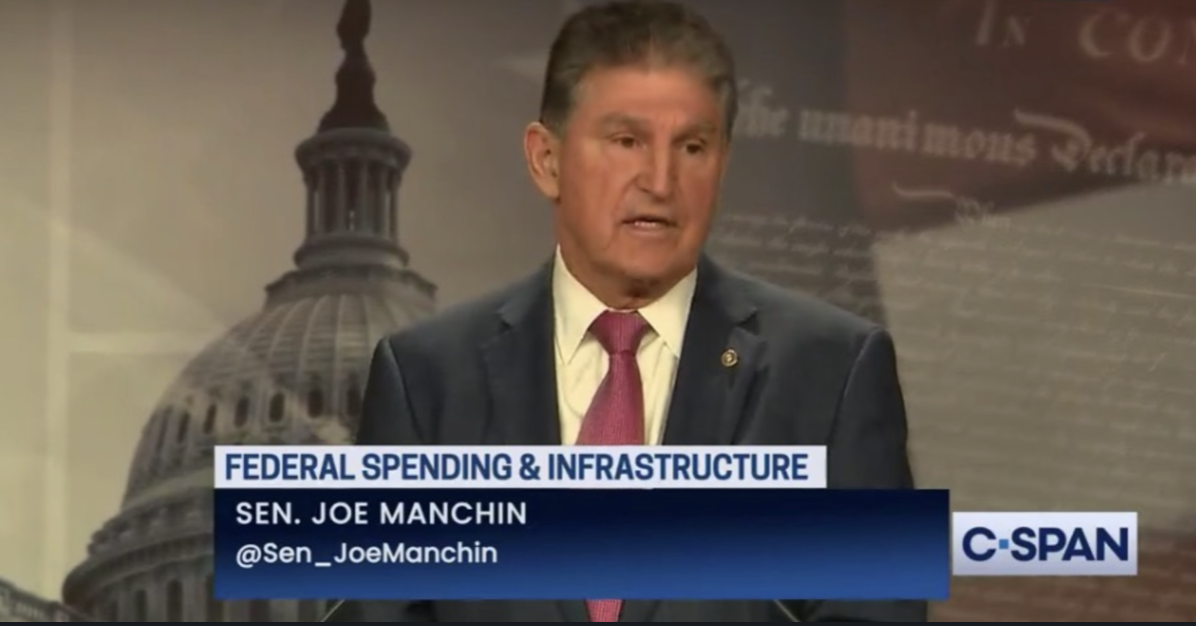 It has become crystal clear that Sen. Joe Manchin (D-WV) is NOT "on board" with Joe Biden's SOCIALIST SPENDING SCAM. During a seven-minute press conference yesterday, the "moderate" from the Mountain State accused House Speaker Nancy Pelosi (D-CA) of holding the $1.2-trillion, fake-infrastructure bill "hostage" to pass the much larger SPENDING SCAM legislation. The West Virginia Democrat also explained:

"To be clear, I will not support the reconciliation legislation without knowing how the bill would impact our debt and our economy in our country we won't know that until we work through the text."

Manchin called for the House to vote on the $1.2-trillion "infrastructure" bill without tying it to the larger legislation. But "progressive" Representatives have refused to do that. They want the entire SOCIALIST SPENDING SCAM passed all at once.

"Enough is enough," he insisted yesterday. "While I've worked hard to find a path to compromise, it's obvious [that] compromise is not good enough for a lot of my colleagues in Congress. It's all or nothing. ... I will continue to deal in good faith with all of my colleagues on both sides. It's time to pass the bill and quit playing games."

ZeroHedge reports that the key takeaway from Manchin's presser is "nothing is happening on the reconciliation bill until the bipartisan infrastructure bill is passed by the House, and more clarity is provided in general." That's why "America First" patriots must keep fighting to defeat Joe Biden's and the radical, unhinged Left's SOCIALIST SPENDING SCAM!

Last night, Grassfire updated our "Stop The Spending Scam!" FaxFire to target dozens of House Republicans and two "moderate" Senators: Manchin and Kyrsten Sinema of Arizona. As we've reported for months, Both Democrats are vital to stopping Joe Biden's and the radical, unhinged Left's SOCIALIST SPENDING SCAM. Their "NO!" votes can save America from becoming "The United States of Socialism."

Click here or on the banner below to urge GOP Representatives to fight and for Manchin and Sinema to stand strong against "progressive" Democrats. Immediately fax your personalized "Stop The Spending Scam!" message to dozens of lawmakers on Capitol Hill for only $25:

It will only take one of those two Democrats to derail Joe Biden's multi-trillion-dollar SOCIALIST SPENDING SCAM. The two "moderate" Senators are holding the line -- at least for now. They're refusing to support the trillions in wish-list, progressive-pork spending their fellow Democrats want.

But before "Biden's Boondoggle" makes it back to the Senate, it must pass the House. Key votes could happen THIS WEEK!

Take immediate action to stop the radical, unhinged Left from driving America off a fiscal cliff into full-blown socialism. Click here to INSTANTLY fax Manchin, Sinema and dozens of GOP Reps to demand they "Stop The Spending Scam!" Thanks, in advance, for making your voice heard.

P.S. If you missed last night's SPENDING SCAM update, please see here. Find out what's at stake in the week ahead. Take immediate action to prevent our great nation from turning into "America The Socialist" by clicking here or the banner below. Rush your personalized "Stop The Spending Scam!" faxes to dozens of key lawmakers on Capitol Hill (up to 52 faxes) for only $25: