Levin: “Too many Republicans have already buckled” 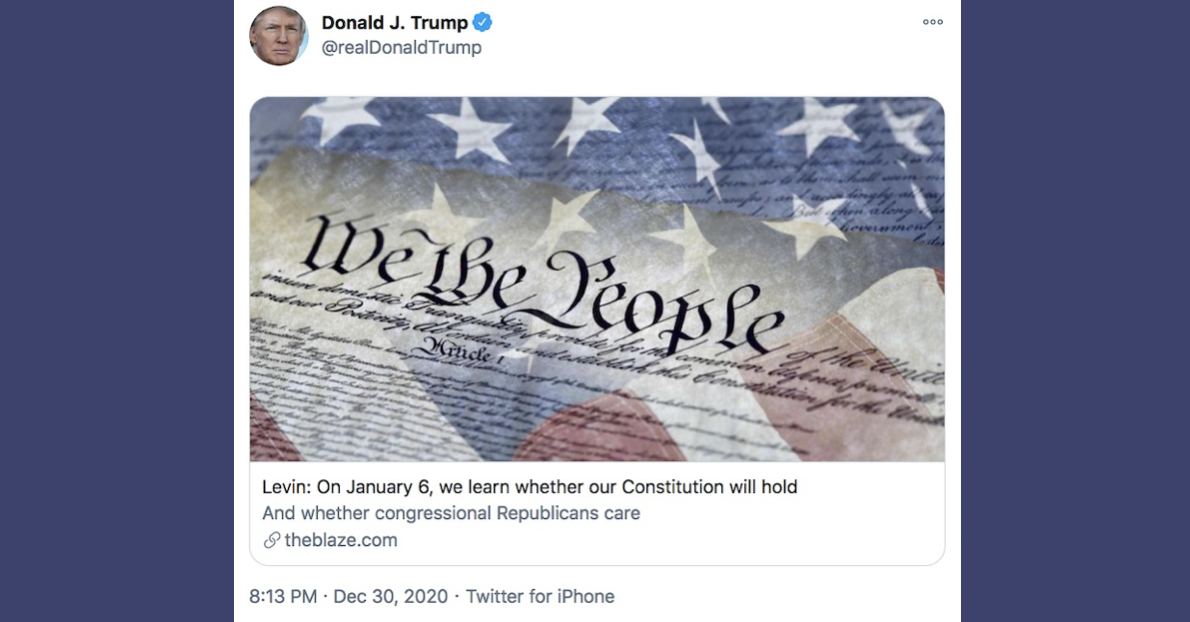 On Wednesday night, President Trump shared an important article written by conservative radio and TV commentator Mark Levin. The Twitter post contained no commentary from America's Commander-in-Chief, just a link to "On January 6, we learn whether our Constitution will hold... And whether congressional Republicans care." (We've included a link to the full article below.)

Levin starts his piece by correctly stating: "The 2020 presidential election was, in several targeted battleground states, an unconstitutional electoral exercise." He then explains that "evidence of significant fraud" has received virtually no court hearings and has been ignored by the leftist media, the Democrat Party and its surrogates, who "perpetrated these unconstitutional acts."

Then, Levin delves into what this looming constitutional crisis means for America itself. Like Grassfire has been doing since November 4, he calls out Republicans for not doing enough to "Stop The Steal!" Levin writes:

Win, lose, or draw, on January 6, the Republicans must not act as if "the people have spoken" and be cowered into passivity or worse, such as joining the Democrat Party and media hecklers, by insisting that they are part of a lawless party seeking to "reverse the results of the election." Too many Republicans have already buckled, including the Senate Republican leader, Mitch McConnell, Sen. John Thune, and Rep. Adam Kinzinger. No doubt others who are unreliable and cowardly when facing the organized mob will follow. But let us not be judged by those who have intentionally and strategically manipulated our politics and the law to undermine our constitutional order. It is they who must be condemned.

There's much more in the article that's worth reading. (Grassfire covered a lot of the same facts here.) But what Levin does so well is point out what really happened leading up to (and shortly after) November 3, 2020 and what's at stake on January 6, 2021:

The Democrat Party, its surrogates, and eventually the Biden campaign instituted an unprecedented legal and lobbying campaign, mostly under the radar, as it was not well covered by the usual media outlets, to undermine our Constitution, the Republican state legislatures, and the Trump re-election campaign, in favor of Biden. In other words, the Constitution's electoral process for choosing electors and ultimately the president and vice president was systematically and strategically attacked. It is now left to Congress, or at least the Republicans in Congress, to confront this. The Democrat Party has done severe damage to the nation's electoral system, to the point where the state legislatures are now in the position of having the least input on the manner in which elections are held and federal electors are chosen — the complete opposite of what the Constitution compels and the framers unequivocally intended.

+ + American Patriots Only Have Four More Days To "Stop The Steal!"

Over the past two months, Grassfire has empowered tens of thousands of our team members to make their voices heard to "Stop The Steal!" Your anger and/or concern over attempts to hijack the 2020 vote is 100% legitimate. America IS facing a constitutional crisis on January 6. That gives "We, the People" only four more days to fight for President Trump!

Massive and widespread evidence suggests election law was blatantly and unconstitutionally violated. Proof of voter fraud exists too, as tens of thousands of illegal ballots from dead, unregistered, underage and other people have been identified. But almost all of it is being ignored by legislatures and courts at state and federal levels.

Click here or on the banner below now to fax your personalized message to Rep. Kinzinger, ALL 53 GOP Senators, SEVEN governors in key battleground states and 16 elected officials in Georgia, Pennsylvania, Michigan and Wisconsin -- for just $30:

McConnell's "go along to get along" approach with Democrats over the past several years has brought disastrous consequences, including ObamaCare, ObamaGate, out-of-control spending and now the "rigged" election! Make your voice heard NOW and demand the Senate Majority "Leader" and other key Republicans take immediate action to stop radical Democrats and the Unhinged Left from hijacking the 2020 election!

If so, click here to immediately send your personalized, pro-Trump, "Stop the Steal!" messages to the Senate Majority "Leader" and 52 other GOP Senators for just $30 -- less than $.40 each. Or, go the "extra mile" with LEVEL TWO faxes and reach Republican House leaders and ALL 37 members of the House Freedom Caucus for only $20 more. Click here to send 116 faxes to lawmakers for $50.

P.S. The COVID-inspired, vote-by-mail scams that Democrats insisted on months ago have brought America to where it is now -- on the brink of a stolen election! Liberty-loving Americans can't let radical Democrats and the Unhinged Left get away with robbing Donald Trump of his second term! The Republican-controlled Senate, key GOP House members, the 16 state legislators, and seven governors targeted in our "Stop The Steal!" MUST take immediate action! Click here or on the banner below now to fax your personalized message to 77 lawmakers for just $30 or 116 legislators for only $50:

Levin: On January 6, we learn whether our Constitution will hold (Blaze Media)