House Republicans are fighting back against the Democrats' impeachment-inquiry Witch Hunt. Yesterday afternoon, a group of about two dozen GOP lawmakers stormed a closed-door, Democrat-only meeting on Capitol Hill. The protest disrupted an interview House Intelligence Committee Chairman Adam Schiff (D-CA) and other lawmakers were holding with a Defense Department official in a secure room called a Sensitive Compartmented Information Facility.

Republicans are fed up with the secrecy surrounding the inquiry and put their frustration on full display yesterday. An Associated Press report quoted Rep. Jim Jordan (R-OH), the ranking member of the House Oversight and Reform Committee, who said: "The [House] members have just had it, and they want to be able to see and represent their constituents and find out what’s going on." 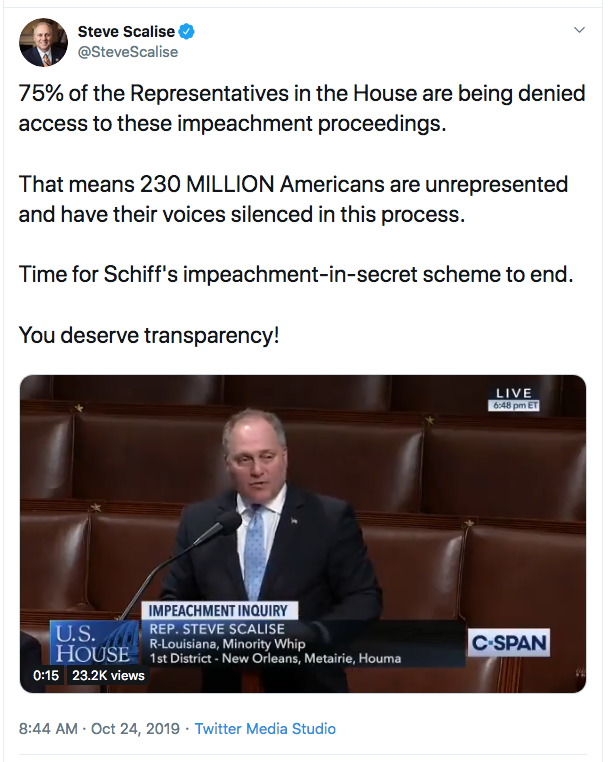 75% of the Representatives in the House are being denied access to these impeachment proceedings. That means 230 MILLION Americans are unrepresented and have their voices silenced in this process. Time for Schiff's impeachment-in-secret scheme to end. You deserve transparency!

As we told you yesterday, this secretive, closed-door, non-transparent "investigation" could drag on through the holiday season and into the new year. The impeachment inquiry is a partisan Witch Hunt that needs to end!

Speaker Nancy Pelosi (D-CA), Schiff and their ilk have launched a coup against a president they can't defeat at the ballot box. The Left, bolstered by the "mainstream media," is rushing toward impeachment hoping to kill Mr. Trump's chances of winning a second term.

Grassfire thinks it about time House Republicans took this kind of bold action to "Fight The Coup!" against the President. If you want to stand with our Commander-in-Chief and against Democrat efforts to remove him from office, we invite you to consider sending personalized I SAY "NO" TO IMPEACHMENT faxes, right now, to your Representative; your two Senators; and key House and Senate Leaders, including 10 Dem Representatives who reportedly are "on the fence" about removing the Mr. Trump from office.

Click here or on the banner below to stand with the President and immediately send your I SAY "NO" TO IMPEACHMENT faxes to key lawmakers on Capitol Hill:

Liberty-loving patriots who support the President MUST take action to "Fight The Coup!" against him. Make your voice heard against impeachment by faxing Congress now. Democrat efforts to take down our Commander-in-Chief by force, rather than by winning an election, MUST not be allowed to succeed!

Grassfire has added significant discounts to our I SAY "NO" TO IMPEACHMENT FaxFire to empower you to make the most impact possible. Receive 40% OFF when you fax your personalized messages to your Representative; your two Senators; and key House and Senate Leaders, including 10 Dem Representatives who reportedly are "on the fence" about impeachment.

When you utilize "Level 2" of the I SAY "NO" TO IMPEACHMENT FaxFire, you also can instantly send a personalized message to every GOP Senator at a 50% DISCOUNT! "Level 3" of this urgent FaxFire empowers you to fax EVERY MEMBER of the United States Senate at a 55% DISCOUNT!

Click here or on the banner below to immediately send your faxes for as low as $.45 each!

If you're outraged by this latest unfounded Witch Hunt against America's President Trump, Grassfire invites you to utilize our unique FaxFire system. Rush your I SAY "NO" ON IMPEACHMENT faxes directly to your Representative; your two Senators; and dozens of key House and Senate targets -- FOR A 40% TO 55% DISCOUNT.

Grassfire feels so strongly about the need for our team members to take action, that we've lowered the price on all three levels of the I SAY "NO" ON IMPEACHMENT FaxFire. Act now to demand Congress stop fanning the flames of an impeachment Witch Hunt! Fax your personalized message to Capitol Hill offices now for as low as $.45 each! Go here to fax now.

P.S. Again, Democrats need to stop trying to undo the results of a free and fair election. If they want President Trump to leave office, they need to take the advice of former president Barack Obama. Responding to critics in 2013, he said, "You don't like a particular policy or a particular president? ... Go out there and win an election." If you think they should stop their attempted coup, take immediate action! FAX House and Senate leaders, your Representative, your two Senators and other key lawmakers to SAY "NO" ON IMPEACHMENT: