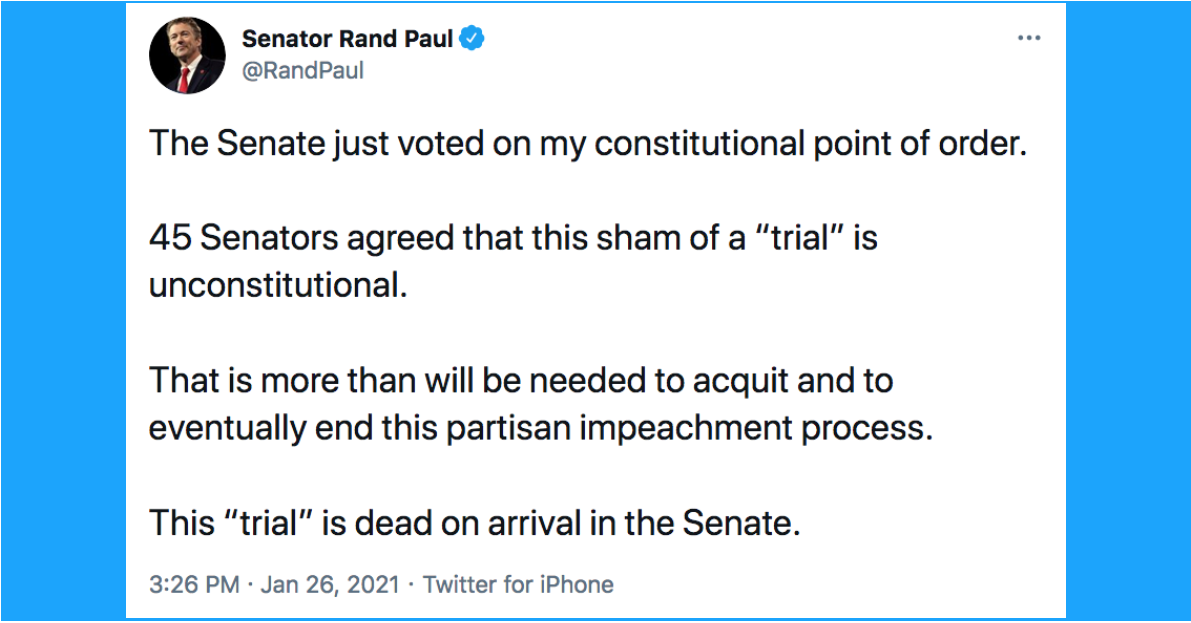 Senator Rand Paul (R-KY) is leading the Republican fight against the upcoming impeachment trial of President Trump -- and he's winning! Paul forced a procedural vote yesterday challenging the constitutionality of impeaching a former commander-in-chief. Shortly after the 55-45 vote revealed that Democrats don't have nearly enough GOP support to convict Donald Trump, the Kentucky Republican posted this on Twitter:

The Senate just voted on my constitutional point of order. 45 Senators agreed that this sham of a "trial" is unconstitutional. That is more than will be needed to acquit and to eventually end this partisan impeachment process. This "trial" is dead on arrival in the Senate.

Yesterday's vote result is some of the best news for pro-Trump Americans in weeks, if not months! While five RINOs did side with Democrats (see their names below), Senate Minority Leader Mitch McConnell was NOT one of them. That means the fight isn't over to stop this "sham trial" before it starts on February 8!

Millions of pro-Trump Americans agree there shouldn't even be an impeachment trial. If you're one of them, Grassfire is empowering you to make your voice heard. Tell Paul, McConnell and 48 other GOP Senators to KEEP FIGHTING! Demand they "Reject The Impeachment Witch Hunt!" Our unique FaxFire system enables you to reach inside the halls of Congress to urge Senate Republicans to stop this "dead on arrival" trial.

Make your voice heard, as Sen. Paul said, to "end this partisan impeachment process." Click here or on the banner below now to immediately fax your personalized message to Senate offices on Capitol Hill for as low as $.50 each:

Democrats need the votes of at least 17 GOP Senators to convict President Trump. Yesterday, they got five. That's it! They're 12 votes short. That's why this second, bogus impeachment shouldn't even go to trial! Click here to immediately tell GOP Senators to "Reject The Impeachment Witch Hunt!" Thanks, in advance, for making your voice heard today.

P.S. Click here to see our previous update, and find out which Senate RINOs stood with Democrats and against President Trump yesterday. Or take immediate action to demand ALL 50 Senate Republicans keep fighting against this unconstitutional, sham trial by clicking here or on the banner below. Instantly fax your personalized, pro-Trump, "Reject The Impeachment Witch Hunt!" message to every GOP Senator now: