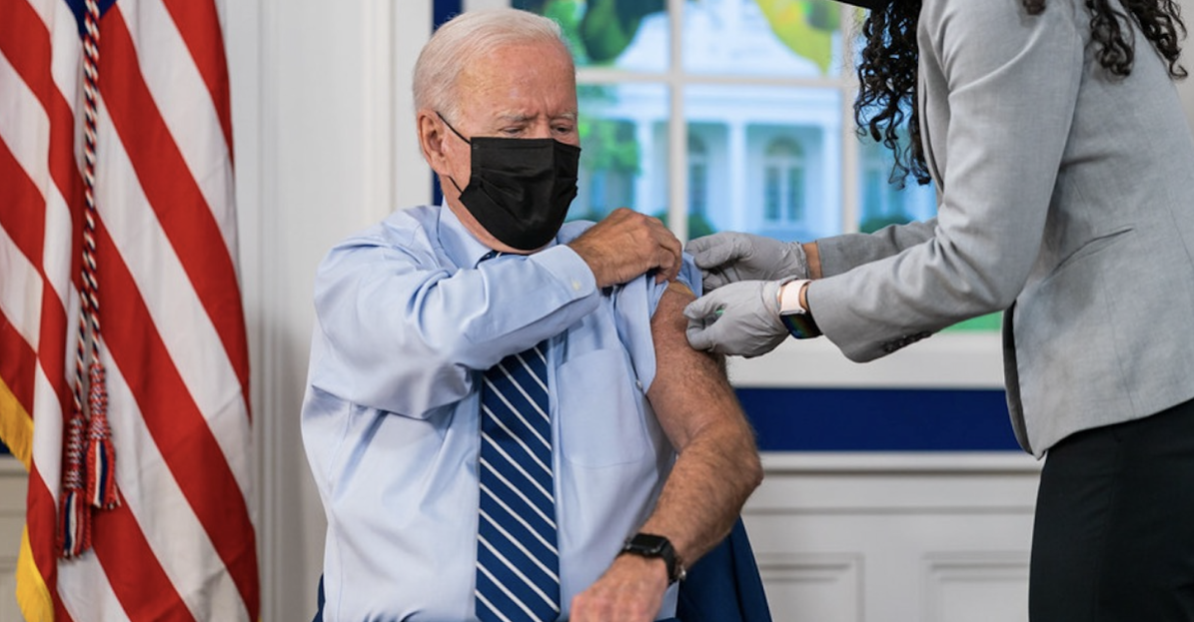 The FEAR-demic is alive and well in the White House -- and, apparently, at FOX News. Last Thursday, one of the network's medical contributors said that Omicron was little more than a cold. But The New York Times reports that the network told New York City employees on Friday they'd need to receive "at least one dose of the Covid vaccine by Dec. 27., removing the option to get tested weekly instead." An article published on the FOX News website this morning warns that the new COVID variant "rages throughout the nation":

Across the country, schools are beginning to shift to remote learning, restaurants are closing their doors to the public, and events are once again being canceled as a result of the new omicron variant of the coronavirus.

The article also highlighted Joe Biden's tweet storm last night, in advance of his scheduled COVID address to the nation this afternoon. Here are some excerpts from Twitter:

If you're an adult choosing to be unvaccinated, you will face an extremely difficult winter for your family and community. ... If you're vaccinated and boosted, you may still get a breakthrough case but doctors say you will likely have no symptoms or mild ones. ... (E)ven if you're fully vaccinated, you should wear a mask when indoors in a public setting. ... Get vaccinated, get boosted, wear a mask.

Based on those Twitter posts, Americans can expect to hear more today about the Biden regime's predicted "winter of severe illness and death if you're unvaccinated." That was the stark warning/scolding Joe Biden gave the nation last Thursday. America can expect more of the same again about the radical, unhinged Left's new COVID "boogeyman" later today.

Grassfire has said for months that we support anyone's choice to get vaccinated and boosted. But we also want to empower Americans who don't want to see people's job and livelihood threatened by a vaccine mandate -- especially for an immunization that Joe Biden admits may NOT prevent the virus.

Liberty-loving, "America First" patriots MUST make their voices heard if they want to STOP THE FORCED VACCINATION OF AMERICA. Click here or on the banner below to sign the "No Jab Mandate!" national petition now.

Take action now, so Grassfire can represent you in our next petition delivery on Capitol Hill. Or keep reading to learn more about stopping Joe Biden's COVID tyranny. Thanks, in advance, for making your voice heard today.

Monday evening:We told you about Friday's ruling by the 6th Circuit Court of Appeals that reinstated Joe Biden's vaccine requirement for private businesses with 100 or more employees. That 2-1 decision, which affects some 80 million Americans, is expected to force the Supreme Court to take action -- perhaps this week!

Tomorrow, the Commander-in-Thief is scheduled to address the nation about the Omicron variant -- the next boogeyman in the radical, unhinged Left's COVID FEAR-demic. Quoting an unnamed "White House official," NBC News reports:

Biden is expected to go beyond his already unveiled "winter plan" with additional measures while "issuing a stark warning of what the winter will look like for Americans that choose to remain unvaccinated." ... Aides say he has told his team the message to the American public must be direct because of concerns that omicron's the more transmissible variant is expected to spread quickly, putting unvaccinated people at a higher risk while also posing a threat to those who have some level of inoculation.

First, it was COVID-19, then the "Delta" variant. Now, Omicron could be the excuse Big Government uses to prolong their tyranny and violate the constitutional rights of millions of Americans. What's even more infuriating is that reports indicate Omicron is, very likely, NOT the wide-scale, deadly threat the Biden regime would have you believe.

On Thursday, FOX News contributor Dr. Marty Makary warned that the Omicron variant is sparking a "massive new wave of fear that is fueling our second pandemic after COVID-19, which is a pandemic of lunacy." The professor of health policy at Johns Hopkins University also told "The Brian Kilmeade Show":

(Omicron) stays superficial in the nose and bronchus. So that's why we're seeing a common cold-like illness. This new scientific data from the lab explains the epidemiological data and the bedside observation of doctors that this is far more mild. … That's why I call it "Omi-cold."

On December 8, the Senate voted 52-48 to defund and repeal Joe Biden's unconstitutional vaccine mandate. On that same day, only hours before Senators passed their resolution, POLITICO reported:

A day later, Grassfire contacted the office of House Minority Whip Steve Scalise (R-LA) to ask when Pelosi might schedule a House vote to defund and repeal the Biden regime's tyrannical vaccine mandate. Our contact there laughed at the idea. "Ha! She won't do it," they wrote.

Multiple federal courts had paused Joe Biden's forced vaccination of America. But now, the 6th Circuit's decision on Friday has set up a constitutional showdown that could happen at the United States Supreme Court BEFORE Christmas.

Millions of Americans should NOT have to choose between taking the jab and losing their jobs. The Senate has already passed a resolution repealing the Biden regime's COVID tyranny. It's time for the House to do the same! Click here to make your voice heard on Capitol Hill.

Grassfire is empowering our team members to fight back against the Biden regime's forced vaccination of America! Tell Speaker Pelosi and Republicans in the House to push for and vote "No" on a resolution to defund and repeal Joe Biden's COVID tyranny. If you oppose this kind of government overreach, click here to sign the "NO JAB MANDATE!" national petition now. Thanks, in advance, for making your voice heard.