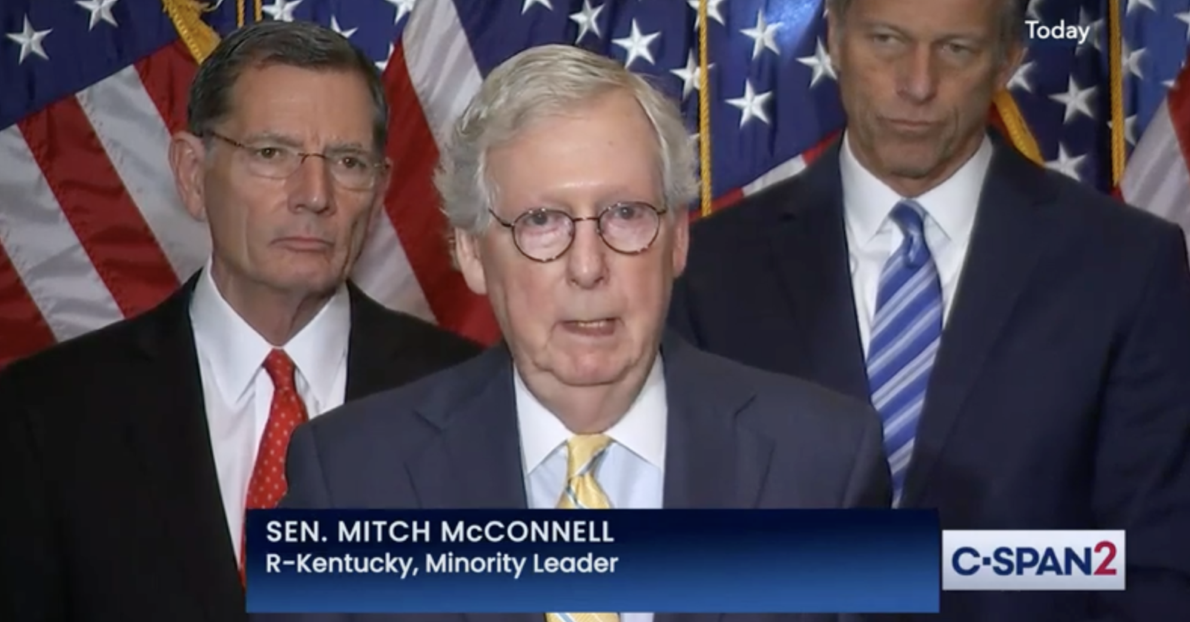 Did Senate Minority "Leader" Mitch McConnell (R-KY) admit that the "Ukraine Supplemental Aid Package" is really about funding and expanding America's war machine? See below and decide for yourself. --Grassfire

Sometime today, the Senate is expected to hold a FINAL VOTE on spending 40 BILLION MORE taxpayer dollars to fight a "proxy war" with Russia. If the Upper Chamber passes the Ukraine Supplemental Aid Package (H.R.7691) today, that would SKYROCKET the total U.S. contribution since March to $54 BILLION!

Grassfire is waiting to hear from the office of Senate Minority Leader Mitch McConnell (R-KY) about the time of today's vote. When we find out, we'll let you know. But if you want Senators to vote "No!", you can take action now.

America is facing an illegal-immigration crisis, out-of-control inflation, record-high gas prices, a baby-formula shortage, rising violent crime and other economic problems caused by the Biden regime. How is it fiscally responsible for Congress to approve this "emergency funding bill" and expect U.S. taxpayers to finance it?

Should GOP Senators STOP the $40 BILLION Ukraine Supplemental Aid Package today? Make your voice heard! Click here to call members of the Upper Chamber now to demand RINOs and the Biden regime protect America's border BEFORE defending Ukraine's. Or fax Senators to tell them you don't want TENS OF BILLIONS in tax dollars used to fight a proxy war with Russia.

Click here or on the banner below now to immediately send a personalized message to ALL 50 Republican Senators and moderate Democrats Sen. Kyrsten Sinema (AZ) and Sen. Joe Manchin (WV). For just $30, urge them to tell Joe Biden: "Secure the U.S. border BEFORE spending 40 BILLION MORE taxpayer dollars to defend Ukraine's!":

On Tuesday, McConnell said the quite part out loud regarding Ukraine aid. He and his fellow RINOs are pushing ahead despite a "revolt" from 11 "America First" Senators who want the Biden regime to fix multiple crises here at home before giving $40 BILLION to fight a proxy war with Russia. Embedded in his speech on the Senate floor, we found what we think is the real truth about H.R.7691:

"America's support to Ukraine has highlighted the limits to our stockpiles of certain munitions and shortcomings in our defense production capacity. A number of European countries have dipped even deeper into their weapons inventories. They will need to refill also. As our European friends wake up from their 'holiday from history' and increase defense spending, I hope the U.S. will be a reliable supplier of advanced weaponry to our NATO allies. A textbook win-win." (Emphasis added.)

A "win-win" for whom? Certainly not American taxpayers, who have to foot the bill for all this! Did the Senate Minority "Leader" admit that the "Ukraine Supplemental Aid Package" is really about funding and expanding America's "war machine"? It's an election year, and "War, Inc." is big business in Washington, D.C. Are defense contractors and arms suppliers getting ready to dole out campaign checks? They'll benefit the most from a proxy war with Russia.

The Ukraine crisis is showing the world in real time what can happen when a nation's border is NOT secure. More than TWO MILLION illegal aliens have invaded America's southern border since Joe Biden ascended to power in January 2021. That's why we're empowering you to send "Don't Spend BILLIONS Protecting The Wrong Border!" faxes to Senate offices on Capitol Hill.

Click here to fax Senators now -- BEFORE today's expected vote. Tell GOP and moderate Senators to stop the Biden regime from spending $40 BILLION in taxpayer money to help Ukraine defend their borders, while ignoring our own problems!

You can demand they call on the Biden regime to "Stop Protecting The Wrong Border!" Also, please consider going the "extra mile" by choosing LEVEL TWO faxes to reach EVERY member of the United States Senate (100 faxes) at a 50% discount! To send your own faxes, click here for a list of FaxFire targets and the Senators' contact information. Thanks, in advance, for making your voice heard.

P.S. Are the pain and suffering caused by the Russian invasion of Ukraine barbaric and unacceptable? Yes!  But is it wise for America to spend $40 BILLION in taxpayer dollars to defend Ukraine's borders and while ignoring multiple crises of our own? As an American taxpayer, you can strongly condemn Russian aggression, support the Ukrainian people and STILL demand Joe Biden protect our border, too. Click here or on the banner below to fax Senators now. Demand they take action to stop efforts by RINOs and the Biden regime to put Ukraine FIRST and America LAST: