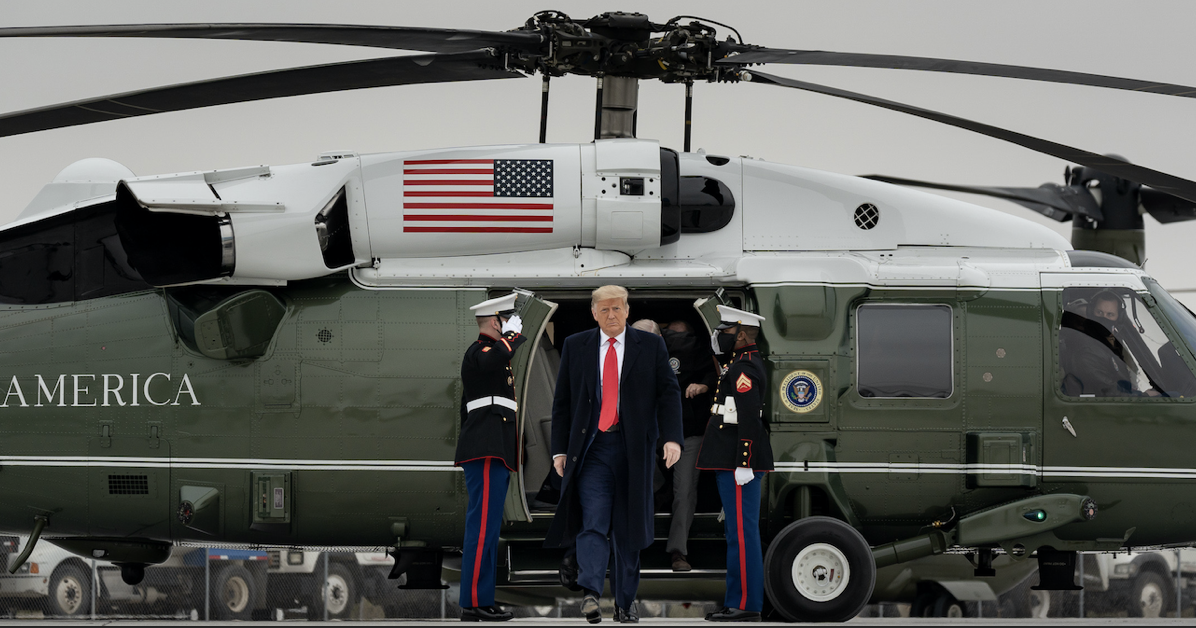 A year ago, President Trump's second-term seemed inevitable. Tens of millions of Americans were celebrating "America's Comeback." But COVID-19 changed everything. The FEARDEMIC, driven by the FAKE NEWS media, enabled radical Democrats and the Unhinged Left to ENGINEER their desired election result.

Coronavirus still requires us to continue protecting those most at risk. But 2020's wide-scale and excessive shutdowns and lockdowns of schools, businesses, churches, etc. threw the U.S. economy into a tailspin. "Big Brother" trampled our civil liberties, "rigged" an election and opened the door to the bitter division and animosity we see now.

Even though the Bidens now reside in the White House, more than 70 million pro-Trump Americans are looking to the former Commander-in-Chief to continue leading the "America First" movement. To commemorate the Trump presidency, Grassfire created our "Never Stop Fighting!" print.

The stunning photo shows President Trump exiting "Marine One" after touching down in Texas on January 12, 2021. In one of his final acts as Commander-in-Chief, he was in the Lone Star State to inspect a section of the border wall that his administration had built.

If you believed that statement during Donald Trump's presidency, you can be confident that he'll keep standing for America. Our "Never Stop Fighting!" print serves as a constant reminder that our 45th president just won't quit.

If you can contribute $30 or more to help Grassfire build in 2021, we'll send you our new and exclusive "Never Stop Fighting!" print of President Trump. As a special bonus for contributions of $50 or more, we'll send you two of these 8"x10" commemorative photos. Click here or on the banner below to order now:

This inspiring keepsake is produced on high-quality paper and is suitable for framing to display proudly in your home. But this limited-time offer ENDS MONDAY MORNING, so don't wait! Click here to order now.

From the beginning, Grassfire said our "Never Stop Fighting!" print would be available for ONLY a short time. The goal was to create something rare, special and exclusive for our team members -- not flood the market with another Trump commemorative.

If you act now -- before Monday morning's deadline -- you can own one (or two) of these 8"x10" limited-edition prints. With less than 400 currently in circulation, you can be assured that "Never Stop Fighting!" will be a unique addition to your home or office.

Grassfire remains deeply committed to equipping our team members with the online-activism tools they need for the battles ahead. Promoting and defending our nation's founding principles of life, liberty and limited government has never been more important. We want to amplify YOUR voice in the fight to keep "America First"!

But to do that, we need your ongoing and generous support. Click here to help and you'll receive our "Never Stop Fighting!" commemorative print in appreciation for your contribution of $30 or more. Contribute $50 or more, and we'll send you two of these Trump keepsakes. Thank you, in advance, for standing with us today.

P.S. Again, our "Never Stop Fighting!" offer ends Monday morning at 9:00 a.m. CT. Don't miss your final opportunity to receive this powerful collectible as a reminder that, even though he's not in the Oval Office, President Trump won't quit on the America people. Click here or on the banner below to receive one of these exclusive commemorative prints for $30 or more and two when you contribute $50 or more to help Grassfire build: