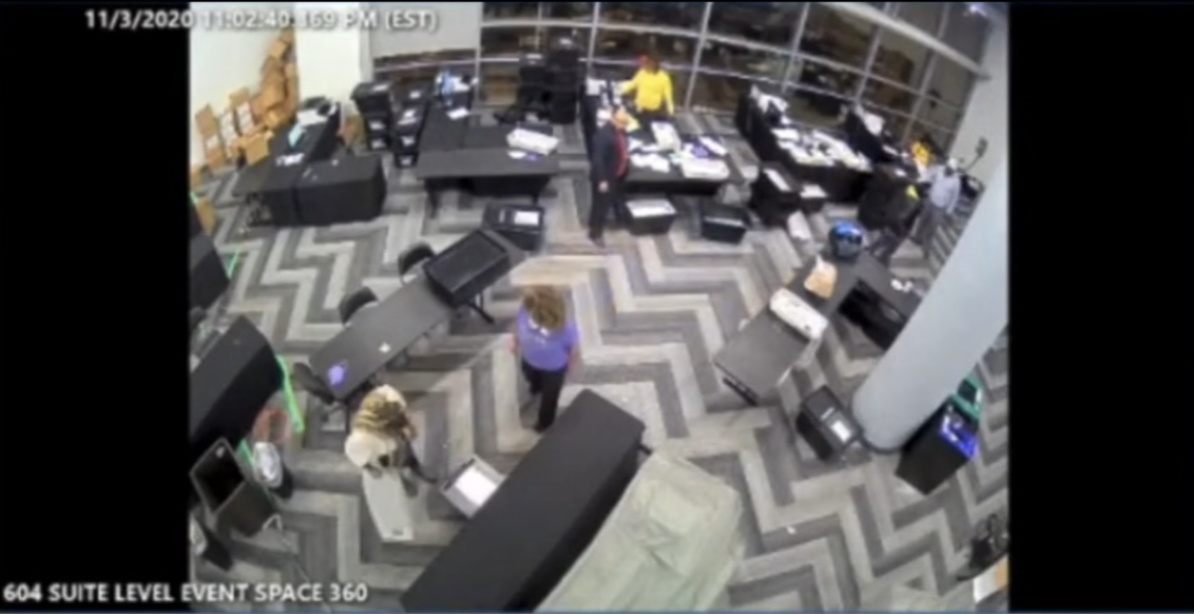 At around 10:25 p.m. on Election Night, supervisors at the vote tabulation center inside State Farm Arena in Atlanta reportedly sent poll workers home. But it appears that a handful of people waited for everyone to leave and then pulled out four cases of ballots from under a table.

The surveillance video presented by the President's lawyers indicates those cases had been in the tabulation center since 8:22 a.m. It appears that THOUSANDS of ballots were counted WITHOUT election monitors in the room! Mr. Trump's legal team says those potentially illegal votes, tabulated over two hours with NO other witnesses, "could easily be and probably is certainly beyond the margin of victory in this race."

One of the poll workers accused of participating in massive voter fraud in Atlanta was identified by her social-media postings. If the shoe was on the other foot -- and the media thought she was a Republican engaged in illegal election activity -- that woman would not be able to leave her house. Law enforcement might have already arrested her for voter fraud.

But so far, only "crickets" from FAKE NEWS about this incriminating evidence of massive ballot harvesting. That's why grassroots patriots, like you, must make their voices heard to "Stop The Steal!"

+ + Stand With The President To "Stop The Steal!" By Faxing Lawmakers Now!
President Trump said on Wednesday: "The constitutional process must be allowed to continue... to defend the honesty of the vote." He added, "It’s about ensuring that Americans can have faith in this election and in all future elections." If you stand with our Commander-in-Chief, take immediate action to keep radical Democrats and the Unhinged Left from hijacking the 2020 election!

This week, Grassfire updated our "Stop The Steal!" FaxFire -- at no extra cost -- by adding the governors of SEVEN states at the center of this fight: Arizona, Georgia, Michigan, Nevada, Pennsylvania, Virginia and Wisconsin. Our unique FaxFire system also targets an additional 16 lawmakers in four of those battleground states (Georgia, Michigan, Pennsylvania and Wisconsin), as well as ALL 53 Republicans in the United States Senate!

The COVID-inspired, vote-by-mail scams that Democrats insisted on months ago have brought America to where it is now -- on the brink of a stolen election! Liberty-loving Americans can't let the radical, unhinged Left get away with robbing Donald Trump of his second term.

Grassroots patriots MUST keep fighting to urge GOP leaders to support the President and his legal team. Take action now to demand House and Senate Republicans expose any and all voter fraud. (Click here to see a complete list of FaxFire targets and their contact info.) Thank you, in advance, for standing with America's Commander-in-Chief today.

P.S. Since Election Day, President Trump has been calling on states to count ONLY LEGAL VOTES. The President is convinced (along with tens of millions of other Americans) that, if ALL ILLEGAL VOTES are thrown out, he'll win in a landslide.The Republican-controlled Senate, GOP leaders in the House, the 16 state legislators, and seven governors targeted in our "Stop The Steal!" MUST take immediate action! Click here or on the banner below now to fax your personalized message to 76 lawmakers for just $30: