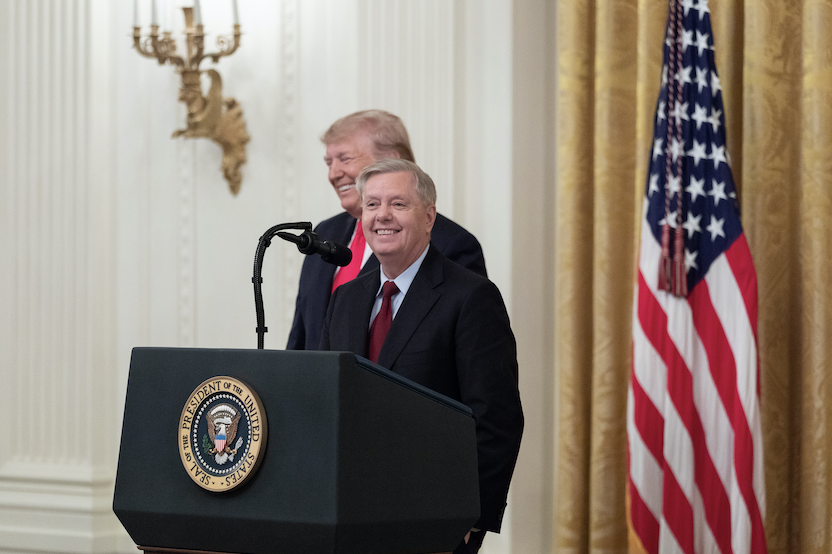 Recently, CBN News reporter David Brody asked President Trump in a one-on-one interview: "On [President] Obama and the spying situation... you've been asked before about what crime he would have potentially committed."

America's Commander-in-Chief didn't even let Brody finish the question before answering. "Treason," he insisted. "It's treason."

Mr. Trump is convinced that the former president is guilty of a criminal act. But do his fellow Republicans agree?

When asked last week about the President's treason charge, Sen. Lindsey Graham (R-SC), chairman of the Senate Judiciary Committee, said: "I don’t know what he’s talking about. I don’t have any evidence to believe (Obama) committed treason."

Well then, what does the senior senator from South Carolina believe? We know that the President thinks "OBAMAGATE makes Watergate look small time!"

We also know that on June 4 the chairman of one of the most powerful committees in the United States Senate was given subpoena power to investigate possible corruption inside the Obama administration. But what has he done with that power? So far, NOTHING!

Back in 2019, Graham called rogue actions by federal agents: "Systematic corruption at the highest level of the Department of Justice and the FBI against President Trump and in favor of Hillary Clinton." So why isn't he doing something about it?

As the chairman of the Senate Judiciary Committee, Sen. Graham has the power to call and subpoena witnesses to investigate the ObamaGate scandal. If you think the American people deserve a full investigation into the real anti-Trump conspiracy, click here or on the banner below to schedule your ObamaGate Faxes for immediate delivery on Capitol Hill:

Nefarious activities against President Trump continue coming to light. Yet, Graham has done almost nothing to bring rogue agents to justice. Just last week, he pledged to "get to the bottom" of any conspiracy against President Trump. But those assurances have been nothing more than empty promises. Isn't it time for that to change?

American patriots MUST DEMAND that the Republican-led Senate take action to expose this scandal. IT'S TIME TO INVESTIGATE OBAMAGATE! For just $15, you can reach your two Senators, your Representative, Sen. Graham, Senate Majority Leader Mitch McConnell (R-KY), and every GOP member of the Senate Judiciary Committee.

ObamaGate must be exposed! Fax Sen. Graham and other key Senators now. Demand accountability and call on Senators to take immediate action! Click here to schedule your faxes now.

Months ago, Graham called FBI efforts to undermine President Trump "the tip of the iceberg." Now, grassroots Americans must push him to get to the bottom of the real collusion scandal. Thanks, in advance, for making your voice heard today!

P.S. ObamaGate could be one of the greatest political scandals in U.S. history -- all designed to destroy a president-elect! In May, Graham told FOX News, "The Obama administration is surveilling the national security advisor of the president-elect. What the h*ll was that all about? … I’ll be all over that." So, what is he waiting for? He has the power to subpoena witnesses but hasn't yet. Demand the GOP-led Senate investigate the Obama administration and recommend that anyone involved in corruption be prosecuted and punished. Go here to fax now: