The attacks sparked harsh criticism and even outrage among Republicans and "America First" patriots, who had been warning of the dangers posed by Joe Biden's botched Afghanistan withdrawal. At a press conference yesterday, the so-called "Commander-in-Chief" admitted: "I bear responsibility for, fundamentally, all that's happened of late."

But in the next sentence, he tried to deflect blame to his predecessor: "You know as well as I do that the former president made a deal with the Taliban."

President Trump, who called for a more strategic Afghanistan withdrawal while he was in the Oval Office, issued a statement in response to the Kabul tragedy. He offered his "deepest condolences to the families" of the fallen, adding: "This tragedy should never have been allowed to happen, which makes our grief even deeper and more difficult to understand."

+ + You Can Take Action To Demand Resignation, Impeachment, Constitutional Removal

Republicans are calling for Mr. Biden's resignation, impeachment or removal from office via the 25th amendment. (See below.) Democrats, who control both chambers of Congress, aren't willing to go that far. But some ARE publicly criticizing the Afghanistan chaos. 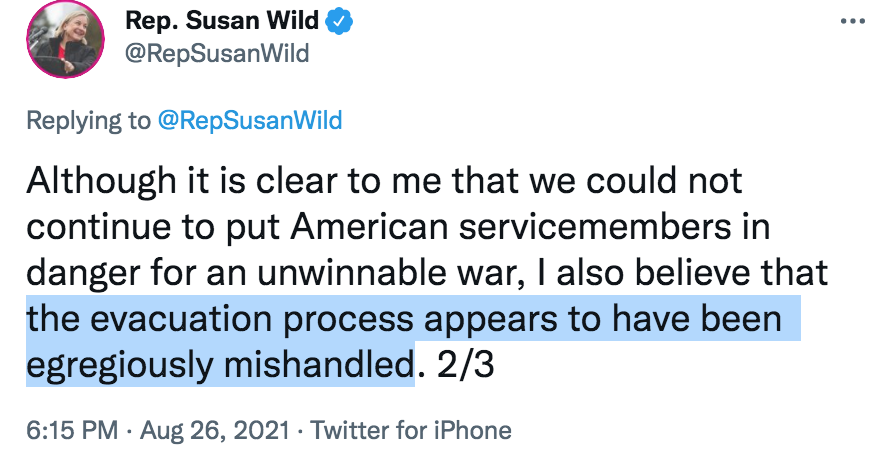 The Washington Post reports: The most vocal Democratic criticism came from Sen. Robert Menendez (D-N.J.), chairman of the Senate Foreign Relations Committee, who questioned whether Taliban guards had failed in letting the ISIS bombers get so close to the Kabul airport.

Shortly after the terror attack, Menendez released a statement, saying: "As we wait for more details to come in, one thing is clear: We can't trust the Taliban with Americans' security."

Calls to impeach Joe Biden, force him to resign or to invoke the 25th Amendment are intensifying. If you want to join the chorus of voices demanding an end to the Biden "presidency," Grassfire wants to empower you to make your voice heard!

The 13 American military deaths in Afghanistan, the first in 18 months, wasn't the only news that sparked outrage yesterday. In an exclusive report, Politico revealed: "U.S. officials in Kabul gave the Taliban a list of names of American citizens, green card holders and Afghan allies to grant entry into the militant-controlled outer perimeter of the city’s airport.... It also came as the Biden administration has been relying on the Taliban for security outside the airport."

Are Joe Biden and his incompetents so out of touch with reality that they've given what is, at best, an "enemies list" and, at worst, a "kill list" to a terror group known for some of the most barbaric acts possible against humanity? Echoing what Sen. Menendez said yesterday, trusting those same terrorists to provide "security" is simply doubling down on stupidity.

Again, if you've had enough of Joe Biden and his administration putting American's security, sovereignty and way of life at risk, click here now to make your voice heard. After Grassfire reaches 20,000 signatures, our representative will deliver your petition to GOP leaders on Capitol Hill. Thanks, in advance, for taking action today.

P.S. If you missed last night's extensive update about the Kabul tragedy, please click here. Find out why one GOP Rep says America is "paying in blood for" this regime's stupidity and another insists: "Joe Biden has blood on his hands." Or go here to sign the "Joe Must Go!" national petition now with just a few clicks:

Biden receives heated criticism from Republicans, questions from some Democrats after Kabul airport attack (The Washington Post via MSN)