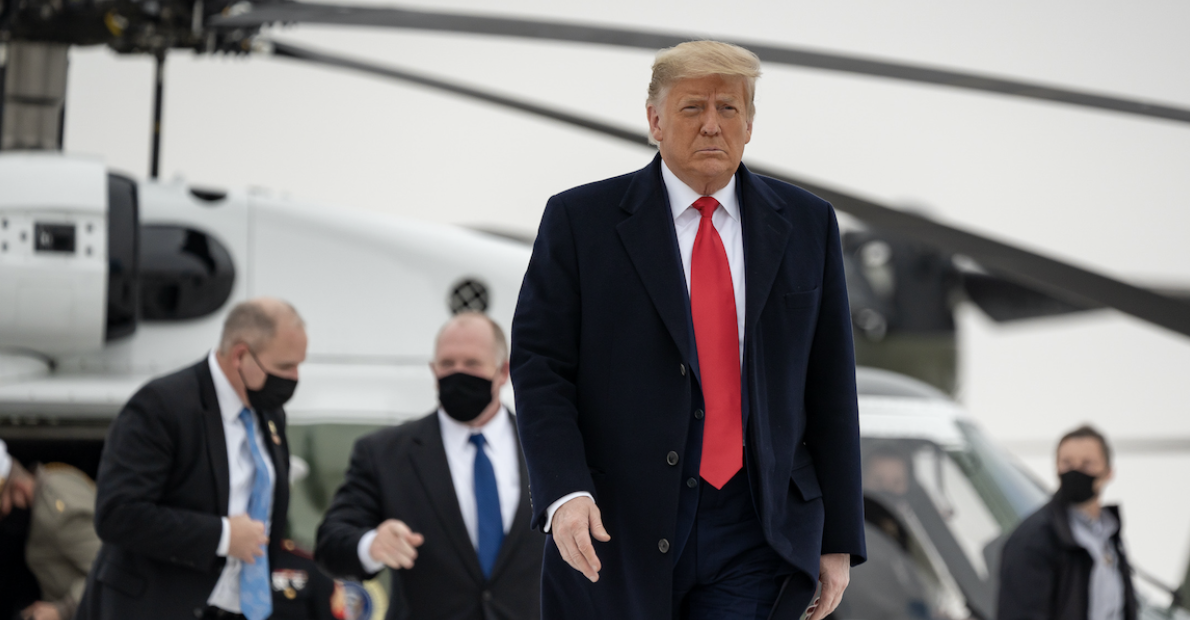 Civil-liberties lawyer, Harvard University law professor and best-selling author Alan Dershowitz has stood with President Trump against Democrat attacks in the past, and he's rising to the Commander-in-Chief's defense again. During "The Dershow" podcast on Friday, Dershowitz asked:

"Can an ex-president be tried in the Senate on articles of impeachment that were issued and voted on by the House of Representatives while he was still serving as president? The answer to that question is clearly 'No' under the text of the constitution, under the policy of the constitution and under the intent of the Framers."

Dershowitz went on to deliver a 36-minute "constitutional seminar" and insisted, "The idea that the president can continue to be tried after he leaves office is so clearly in violation of the text and policies of the Constitution. ... Impeachment was designed to remove a sitting president. It was not designed to prevent a former president from running."

But the effort by House Speaker Nancy Pelosi (D-CA), Senate Majority Leader Chuck Schumer (D-NY) and others to impeach President Trump this time is an attempt to prevent him from running for the White House again in 2024. They don't want to just beat him. They want to bury the President and the "America First" political revolution he started. But according to Harvard Law School's Professor Emeritus:

+ + The Real Reason Behind This Second SHAM Impeachment Attempt

Again, the real reason behind this latest attempt to take down President Trump is to prevent him from running again and winning the presidency in 2024. That's the ENTIRE point of this second SHAM impeachment. Senate RINOs could vote to impeach because they don't want President Trump dominating the GOP for the next four years, while Democrats are petrified that he could become president again on January 20, 2025.

But the Senate CANNOT impeach the President unless 17 of the 50 Republicans (34%) vote "Yes!" That's why we're asking Grassfire team members to start faxing Senators now! Using our "Stop The Purge!" FaxFire, you can reach every GOP Senator with your personalized message for only $30. Click here or on the banner below to immediately fax 50 Republicans in the "Upper Chamber" for just $.60 each:

Dershowitz has a solution to the pending constitutional showdown in the Senate. "I think it would be so much better if the matter would just drop," he said. "The idea of now going to a Senate trial in order to disqualify (President Trump) — a trial that’s probably unconstitutional, a trial that’s probably illegal and a trial that may well be struck down by the courts — is a foolish waste of American taxpayers’ money, of priorities, and I think, is not good for the Biden administration."

But radical Democrats, the Unhinged Left and Establishment RINOs are so afraid of "Trump 2024" that they want to PURGE the President and his supporters from the public square. Never mind that 74 million Americans voted for him less than three months ago. Because our Commander-in-Chief and millions of pro-Trump patriots dared to question the results of a deeply flawed -- if not outright fraudulent -- election, they're being canceled, silenced and censored by Big Tech, FAKE NEWS and EVEN the Republican Party.

+ + First They Want To Purge Trump, Then They'll Try To Purge You!

This second SHAM impeachment isn't about ONLY purging President Trump. This is about purging YOU AND OTHER CONSERVATIVES -- anyone who dares to stand for the Constitution, for liberty and against the socialist/Marxist "great reset" of society that's under way. This is just the beginning if grassroots Americans don't take action to STOP THE PURGE right now -- starting with this outrageous effort to impeach President Trump.

If pro-Trump Americans sit by silently and do nothing, while they impeach the President, then the PURGE will never stop. Conservative thought will continue to disappear from social media. Trump supporters will be PURGED from having any voice on TV and radio. Conservatives could even be PURGED from being able to run for office. The "liberal mob" will PURGE you (and Americans like you) in every way possible.

Grassroots patriots must take a stand to STOP THE PURGE of President Trump! Radical Democrats, the Unhinged Left, the GOP Establishment, NeverTrump RINOs, the Deep State, the D.C. Swamp, FAKE NEWS and Hollywood's "elite" all want to PURGE the Commander-in-Chief, and then PURGE you. Click here to demand GOP Senators vote "NO!" on impeachment!

We updated our "Stop The Purge!" FaxFire last week to target EVERY Republican Senator -- up to 50 faxes in all. And to encourage every grassroots citizen to take action, we've discounted our LEVEL ONE FaxFire by 40%! Even if you've sent "Stop The Purge!" faxes in the past, please consider taking action again.

Or "go the extra mile" and choose LEVEL TWO of the "Stop The Purge!" FaxFire to reach the ENTIRE UNITED STATES SENATE. That's a total of 100 faxes for just $50 -- a 50% discount! Click here now. Thanks, in advance, for standing with President Trump today.

P.S. It's not enough that radical Democrats and the Unhinged Left ENGINEERED an election result. It's not enough that President Trump has conceded and will only be Commander-in-Chief for another week. This is about PURGING this president and the "America First" movement he represents. Mr. Trump and his supporters are such a fundamental threat to the oligarchs who rule Washington, D.C., Big Tech and FAKE NEWS that every remnant of this presidency must be fully REJECTED, DEFEATED, ERASED and even HUMILIATED by the hypocritical Left. Take a stand now by clicking here or on the banner below to send your "Stop The Purge!" faxes IMMEDIATELY to Capitol Hill:

"The Dershow" with Alan Dershowitz (Rumble)