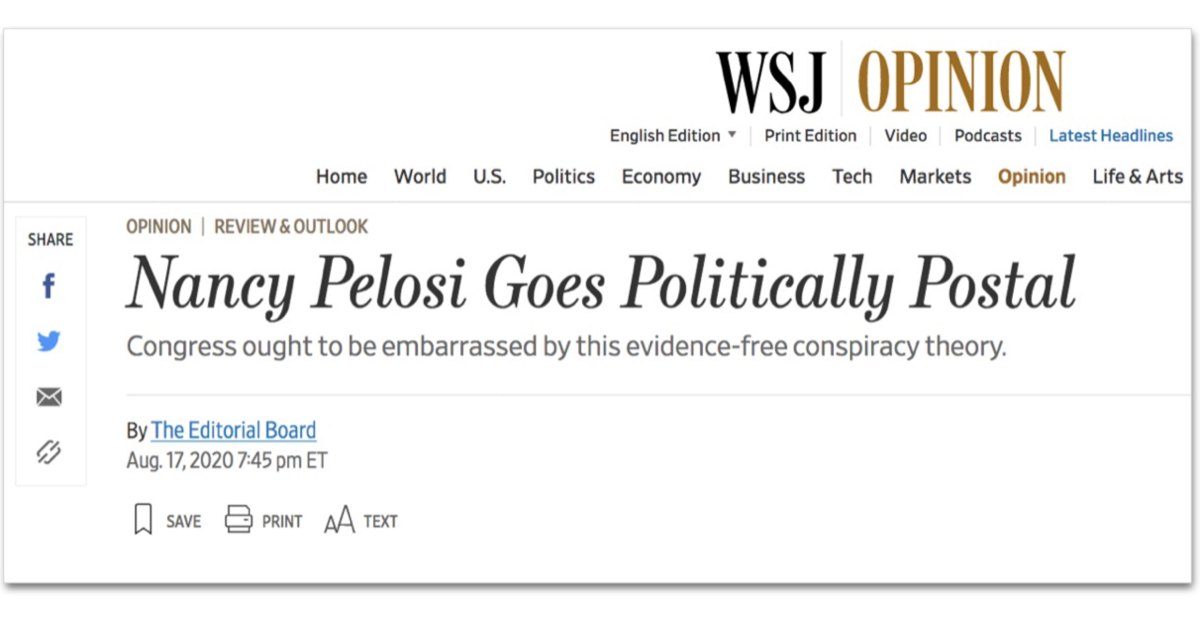 Democrats have entered "tin-foil hat" territory in their latest attacks against President Trump. House Speaker Nancy Pelosi (D-CA) and her minions have been out in force this week ridiculously accusing the Commander-in-Chief of waging an imaginary war against the U.S. Postal Service (USPS). The Wall Street Journal editorial board says Pelosi has gone "politically postal" with her "unsubstantiated" and "evidence-free" claims.

As a result of the Speaker's hoax efforts, social-media websites have been filled with what House Republican Whip Steve Scalise (R-LA) calls "insane conspiracy theories and political games." Twitter users are sharing 2016 photos of locked mailboxes, claiming that the Trump administration is trying to keep people from voting in the 2020 election.

Other photos show stacks of mail boxes being transported or stored for reconditioning. Internet trolls wrongly insist those mail boxes are being taken out of commission so the President can steal the election.

In a letter Wednesday, the GOP's second-ranking member of the House accused the Speaker of spreading "baseless conspiracy theories ... for political gain." Scalise wrote, in part:

"These unfounded theories contend that the USPS is removing mail boxes to prevent citizens from voting by mail, that the USPS does not have adequate funding and will be insolvent before the November election, and that the USPS lacks the infrastructure to deliver mail-in ballots to and from voters. As you know, none of these claims has any basis in fact. Once again, Democrats have manufactured a crisis to undermine President Trump."

Pelosi's post-office conspiracy is a thinly disguised attack against the integrity of the 2020 presidential election. Democrats want to institute widespread mail-in voting less than eight weeks from Election Day. That would create a nightmare scenario for ballot harvesting, ballot stealing and voter fraud.

Also, the Speaker calling the House back into session the day after the Democrat National Convention ended is the very pinnacle of political theater. The "Delivering for America Act" (H.R. 8015) is not only unnecessary, there's NO WAY it will pass the Senate. It's doubtful the "Upper Chamber" would even vote on it, and President Trump certainly wouldn't sign it.

But with a House vote on the post-office "relief" bill expected TOMORROW grassroots patriots only have about 24 hours to make their voices heard! If you're AGAINST a Democrat-led push to use this legislation to pave the way for using mail-in ballots in the presidential election on November 3, click here or on the banner below to fax your Governor, Representative, two Senators and key House and Senate leaders now -- including House Speaker Nancy Pelosi. Demand they say "NO!" to voting by mail:

The truth is that the USPS doesn't need the $25 billion Democrats are proposing. The postal service has enough money to remain operational for at least the next 12 months. In fact, Scalise's office says the pandemic has improved the USPS' finances "due to increased package demand, and revenues are $1.3 billion higher than the same period last year."

Also, as we told you earlier this week, Congress approved loaning the post office $10 billion, which the federal agency hasn't even touched yet. So, if you want Pelosi to call off her phony crisis, we urge you to contact her RIGHT NOW, using Grassfire's unique FaxFire system.

In response to tomorrow's vote, Grassfire just updated our "No Fraud" FaxFire targets. Instantly reach the Speaker, your Governor, your Representative, your two Senators and other key leaders in the House and Senate. For just $15, demand they say "NO!" to vote by mail. Pressure lawmakers to take action and ensure "No Election Mail Fraud!" Click here now to schedule your personalized faxes for immediate delivery.

Expand your impact by choosing "Level Two" at a 40% discount and reach EVERY MEMBER of the GOP's House Freedom Caucus. "Level Three" empowers team members to add ALL remaining Republican Senators at a 52% discount. Go here to send your "NO ELECTION MAIL FRAUD!" faxes now!

P.S. America's voting process must be credible and trustworthy. If people can social distance while standing in line at a supermarket, bank, etc., they can do the EXACT same thing to vote! But the Democrats and their activist media allies have spent nearly six months trying to scare Americans to death (or into submission) about COVID-19. Now, because many of their supporters appear to be afraid to leave their homes and vote, they want to change the rules les than eight weeks before Election Day. If you think America can't risk ballot harvesting, ballot stealing or ballot fraud, click here or on the banner below now to instantly fax lawmakers and urge them to say "NO!" to vote by mail: