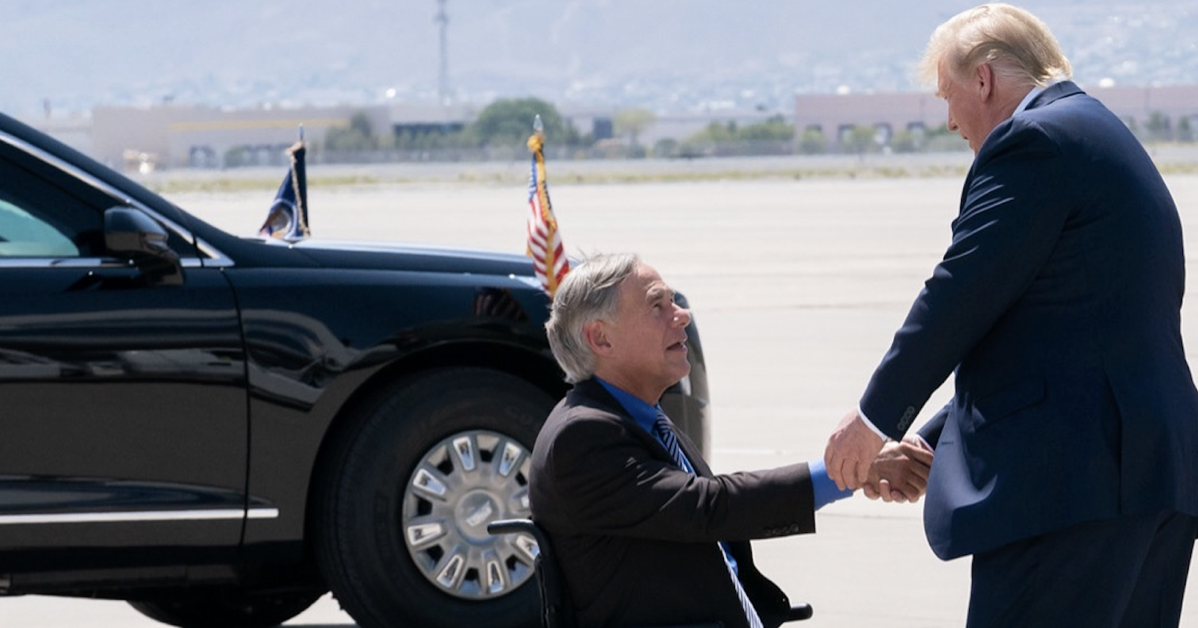 The website ZeroHedge reported last night that Texas governor Greg Abbott (R) is considering declaring an "invasion" at the border the Lone Star State shares with Mexico. With that move, Abbott would, in effect, be invoking war powers allowed by the U.S. Constitution (Article IV, Section 4) to protect "against invasion." ZeroHedge also says:

At a recent press conference, Abbott said: "If we do use this strategy, it could expose law enforcement in the state of Texas to being prosecuted. ... Is it something we're looking into? Yes."

+ + An Invasion Bigger Than D-Day?

It's nearly impossible to argue against the idea that America is being invaded. Since the failed Biden regime rose to power in Washington, D.C., more than two million illegal aliens have crossed the southern border. But with the pending expiration of Title 42, a Trump-era health-policy order that allowed for immediately expelling "migrants" due to the COVID pandemic, a reported 60,000 more people are waiting to illegally cross into the U.S. from Mexico.

By comparison, 57,000 U.S. troops stormed Omaha and Utah Beaches on D-Day in 1945. So, the question really isn't if Abbott should declare an invasion, it's "Why hasn't he and other governors done it already?" What are they waiting for?

ImmigrationReform·com reports the number of "encounters" by U.S. Customs and Border Protection broke another record in March. When data for April is compiled, the results are expected to be equally as bad, if not worse. To protect America's sovereignty, security and way of life, you can call on Congress to take IMMEDIATE action.

A handful of Senate Democrats are joining Republicans in pressuring Joe Biden NOT to let Title 42 expire. They've co-sponsored a bill calling for the Biden regime to extend Title 42. If you want to see that bill become law, you can tell them by taking action now. Grassfire is giving team members the opportunity to make their voices heard on Capitol Hill!

If the order is allowed to expire at the end of this month, Republican lawmakers have said they expect "up to 18,000 illegal immigrants to arrive each day at our southern border. This would mean over 500,000 illegal immigrants arriving per month at our border." That's a pace of six million illegal border crossings per year, which is more than the population of 31 states!

The failed Biden regime continues to hide its head in the sand about America's illegal-immigration crisis. Joe Biden and his ilk are doing almost nothing to address the flood of aliens invading the U.S. southern border. The current border crisis isn't even a blip on Mr. Biden's political radar screen. Tell Senators and Representatives to demand he make it a priority and "Stop The Invasion!" Demand they help secure America's southern border now!

GOP lawmakers must hear your voice in the fight to protect the United States from the dangers of illegal immigration. If "America First" patriots stay silent, an even more intense "border surge" would increase government dependency, lower wages, raise crime rates, usher in mass amnesty, and fundamentally transform our great nation.

P.S. Again, more than two million illegal aliens have crossed America's southern border since Joe Biden was installed as "Commander-in-Chief." By releasing them into our communities, his regime is directly and deliberately threatening America's sovereignty, security and way of life. Grassfire representatives are prepared to deliver "Stop The Invasion!" petitions to GOP leaders on Capitol Hill once we reach 20,000 signatures. To be included in that upcoming petition presentation, go here to sign now: