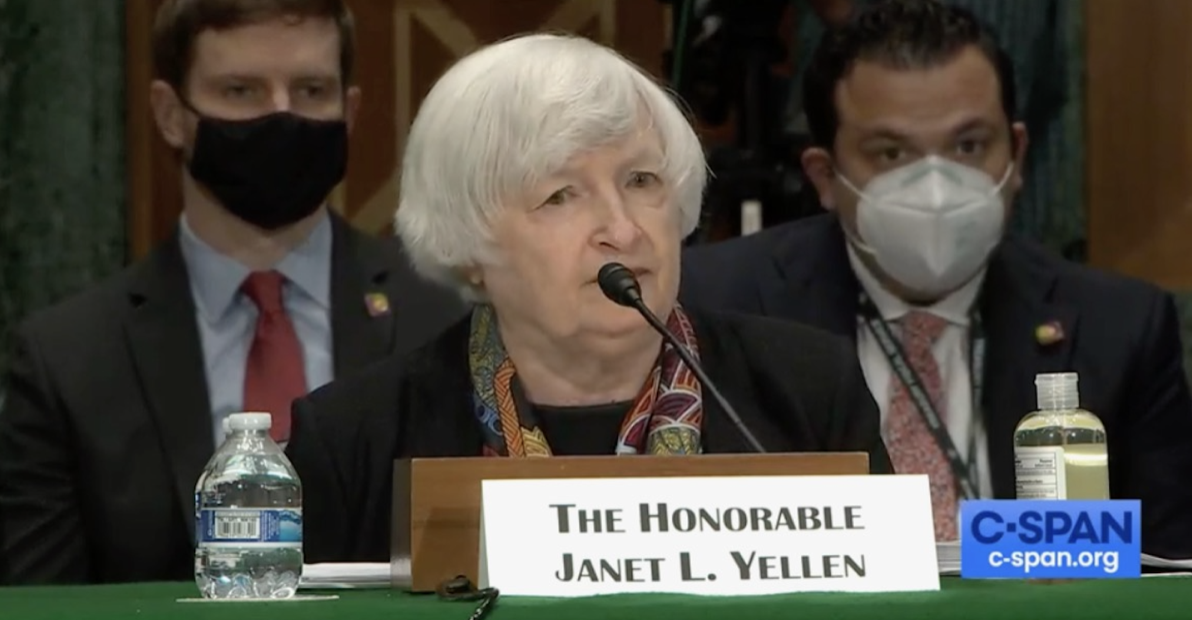 Joe Biden's Treasury Secretary "said the quiet part out loud" about Roe v. Wade before the Senate Banking Committee today. Janet Yellen claimed that research shows the landmark, 1973 Supreme Court decision "had a favorable impact on the well-being and earnings of children."

Wait! What?! Roe v. Wade created a so-called "right" to abortion. Killing unborn children is NOT a "favorable impact" on them. In some of the most shocking and, quite frankly, disgusting comments Grassfire has ever seen from a member of the Biden regime, Yellen also said:

"I believe that eliminating the right of women to make decisions about when and whether to have children would have very damaging effects on the economy and would set women back decades. ... (D)enying women access to abortion increases their odds of living in poverty or need for public assistance."

Psalm 123:7 tell us, "Children are a gift from the LORD; they are a reward from him" (NLT). It's horrible to believe that a child born into poverty is less worthy of life than a baby with wealthy parents. It's equally bad, if not worse, to think that a pregnancy can or should be terminated for interfering with a woman's schooling, career or, as Yellen said, her "earning potential."

POLITICO reports that Sen. Tim Scott (R-SC) "pressed (Yellen) on her answer, arguing that framing the issue of abortion around labor force participation 'feels callous to me.'" Scott added: "I'll just say that as a guy raised by a Black woman in abject poverty, I am thankful to be here as a United States senator."

Honestly, Grassfire was blindsided today by the "abortion is good for the economy" argument. We didn't think the radical, unhinged Left would be so brazen as to actually admit they want to kill unborn and newborn babies to benefit financially. Yet, sadly, here we are.

The Senate is less than 24 hours away from an important, high-profile abortion vote. Majority Leader Chuck Schumer (D-NY) wants to pass a law that Senate Minority Leader Mitch McConnell's (R-KY) office says "would effectively legalize abortion on demand through all nine months" of pregnancy.

You can urge Senators to vote "NO!" on S.4132, the misnamed Women's Health Protection Act, by sending a personalized message directly to their offices on Capitol Hill. Utilize Grassfire's unique FaxFire system to make your voice heard BEFORE tomorrow's vote.

Click here or on the banner below now to demand Senators take action to "End Abortion In America!" For just $30, you can tell EVERY Senate Republican and two key "moderate" Democrats that you want them to protect unborn and newborn babies:

Because pro-abortion Democrats can't stomach defeat on ANY level, they're fighting back. Schumer's scheduled vote tomorrow is a "Hail Mary" to save Roe v. Wade by enshrining abortion into federal law. "America First" patriots have just ONE MORE DAY to make their voices heard.

Click here to fax Senators now and tell them to vote "NO!" on S.4132. For just $30, you can fax all 50 Republican Senators and two key Senate Democrats -- Joe Manchin of West Virginia and Bob Casey of Pennsylvania -- who have previously opposed abortion on demand.

Secretary Yellen's shocking comments today revealed what the radical, unhinged Left really thinks about children and motherhood. According to the "woke" mob, both can be aborted for being an impediment to career advancement and income potential. It's heinous and unacceptable. Thankfully, GOP Senators are fighting back. Click here to fax them now.

If you missed this morning's "End Abortion In America!" update, you can read it here. Find out why Senate Minority Leader Mitch McConnell (R-KY) said Washington Democrats are attempting "to destroy two institutions for the price of one." Thank you, in advance, for taking action against abortion BEFORE TOMORROW'S VOTE.

P.S. In the time left before tomorrow's Senate vote, please consider expanding your impact by reaching all 100 United States Senators for only $50. To send your own "End Abortion In America!" faxes, click here to see a complete list of FaxFire targets and their contact information. To take immediate action in defense of unborn and newborn babies, go here to fax Senators now: