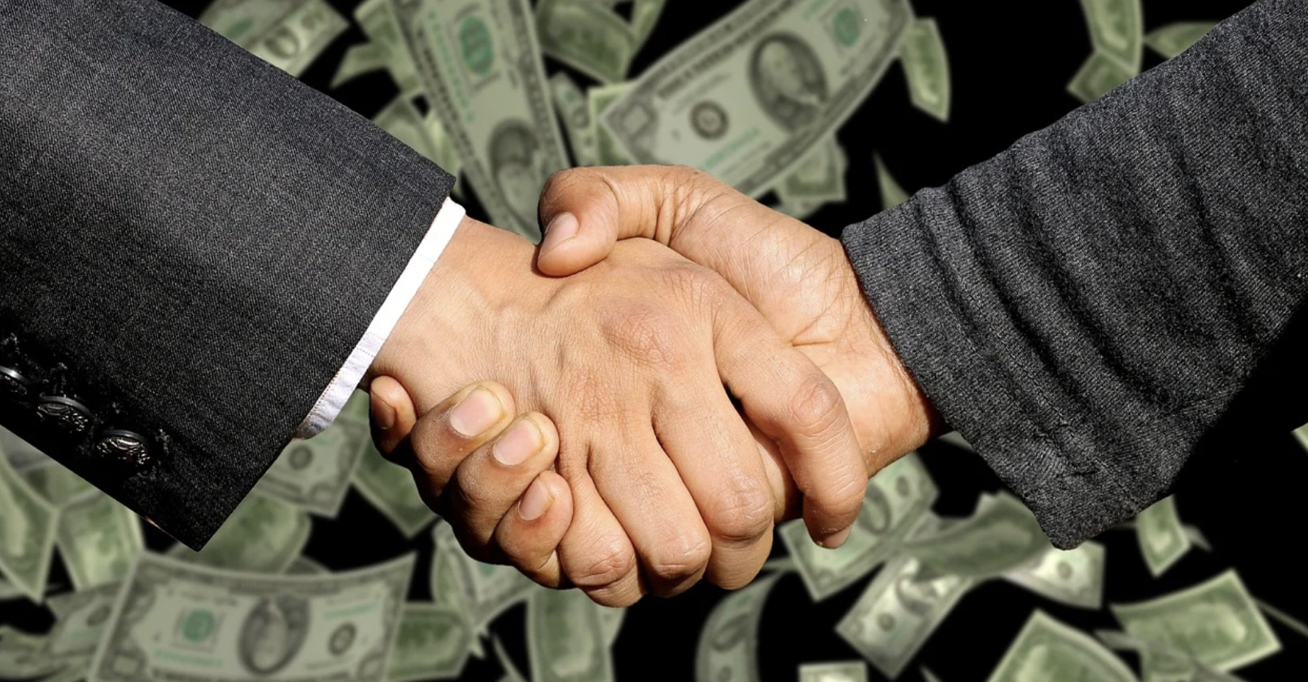 Joe Biden and his fellow Democrats want to pass $4.7 trillion in new spending bills that will force American taxpayers to finance a far-left, socialist, "human infrastructure" agenda. Funding these progressive, wish-lists can ONLY be stopped by EVERY Senate Republican and at least ONE moderate Democrat.

Senate Majority Leader Chuck Schumer (D-NY) has promised to bring "Biden's Boondoggle" bills to the floor as soon as NEXT WEEK. The Wall Street Journal confirms what Grassfire has been telling you over the past week about these multi-trillion-dollar Democrat wish-lists:

This would be the largest spending increase in U.S. history, and a huge increase in the size and scope of government. It would lift federal spending as a share of GDP to more than 25% from the modern norm of 20% to 21% or so. Democrats are going for broke — literally.

Grassfire is empowering you to take action in response to the radical, unhinged Left's attempt to drag America kicking and screaming into full-blow socialism. Late yesterday, we updated our "Stop Biden's Boondoggles!" FaxFire to increase YOUR IMPACT when you make YOUR VOICE heard!

Now, you can fax all 50 Senate Republicans AND two moderate Democrats, Sens. Joe Manchin (WV) and Jon Tester (MT), for only $30. Or reach every U.S. Senator (100 faxes) for just $50 and demand they "Stop Biden's Boondoggles!" Go here:

ZeroHedge reports that at least two "moderate" Democrats are "not yet on board" with the $3.5 trillion in additional spending. There may be more in the coming days if American patriots make their voices heard. Don't let America rush "full steam ahead" into socialism! Click here to send your personalized message to Senators now using our updated FaxFire.

Again, Democrats want to use the $1.2 trillion "infrastructure" bill as leverage to pass a $3.5 trillion "human infrastructure" proposal via "budget reconciliation." That means it could become law without a single Republican vote! But you can take action to stop $4.7 trillion in American-taxpayer money being used, mostly, on far-left, progressive wish-lists.

To learn more about Mr. Biden's and radical Democrats' immediate plans to spend our nation into economic, social and political ruin, please see our previous message below. Thanks, in advance, for taking action today.

P.S. If these mammoth, unsustainable and socialist spending bills pass, Americans will witness the biggest federal expansion in our nation's history. An already bloated U.S. government will grow even larger -- and more powerful. Click here to stop it by instantly sending your personalized "Stop Biden's Boondoggle!" faxes to 50 GOP Senators, Sen. Manchin and Sen. Tester for just $30. Or reach all 100 U.S. Senators for only $50 now:

Senate Democrats have done EXACTLY what Grassfire told you they would. Last night, Senate Minority Leader Chuck Schumer (D-NY) announced that he and his Big Government, radical-leftist colleagues have agreed to ANOTHER "Biden Boondoggle." CBS News reports:

Democratic senators announced late Tuesday that they reached a deal on a $3.5 trillion infrastructure bill that they will attempt to pass through reconciliation, a process that will allow the legislation to be approved without any Republican votes. The bill is expected to include President Biden's "human" infrastructure priorities not covered by a bipartisan proposal, such as child care, health care, education and additional climate change-related provisions.

Over the past week, we've been warning you that a $1.2-trillion, "bipartisan," "infrastructure" boondoggle would be used as "leverage" to usher in more multi-trillion-dollar government spending. Well, this is it. As noted above, Democrats are trying to ram through this additional $3.5 trillion using "budget reconciliation," which means it could become law with ZERO Republican support!

A handful of Senate RINOs are pulling their "play-fight and surrender" routine in an effort to look "bipartisan." But less than half of $1.2-trillion, "bipartisan," "infrastructure" legislation will be used to fix roads, bridges, the U.S. energy grid, etc. The New York Post reports that $621 billion will be "redirected." (The bogus, $1.9-trillion, COVID-relief boondoggle in March spent less than 9% on coronavirus measures.)

Since January 20, 2021, the Biden regime has added $1 trillion to the national debt -- and Democrats STILL want more! They want to pass $1.2 trillion and then another $3.5 trillion in spending to finance their progressive wish-list of "human infrastructure" (whatever that is). Radical Democrats, the Unhinged Left and the "woke" mob are NEVER satisfied. They just want to spend, spend, spend and take, take, take from American taxpayers. That's totally unacceptable!

You can take immediate action to oppose both of these obscene, progressive boondoggles. ZeroHedge reports that at least two "moderate" Democrats are "not yet on board" with the $3.5 trillion in additional spending: Sen. Joe Manchin (WV) and Sen. Jon Tester (MT). Grassfire is empowering our team members to fax those two Senators and EVERY Republican Senator now! Demand they vote "NO!" on these radical-leftist, taxpayer-funded giveaways disguised as a bipartisan, infrastructure bills.

Click here or on the banner below to rush your personalized message to Capitol Hill using Grassfire's unique FaxFire system. Instantly send "Stop Biden's Boondoggles!" faxes to all 50 GOP Senators, as well as moderate Democrat Sens. Manchin and Tester. That's 52 faxes for only $30! Reach EVERY member of the U.S. Senate (100 faxes) for just $50:

ATTENTION GRASSFIRE VIPS: GO HERE TO SEND YOUR "STOP BIDEN'S BOONDOGGLES!" FAXES FOR 80% OFF!
(Not a VIP? Go here to send this fax at 80% off.)
(Having trouble accessing your benefits? Go here.)

The U.S. national debt is currently $28.5 trillion. Mr. Biden and his fellow Democrats added $1.9 trillion in March and now want to add $4.7 trillion more! That's outrageous AND unsustainable! If Republican and moderate-Democrat Senators don't stop this legislation, Americans will soon witness the biggest expansion of government in our nation's history.

Infrastructure spending sounds good if you're talking about building and repairing roads, bridges, airports, the U.S. energy grid, etc. But to radical Democrats, infrastructure is whatever they want it to be. Far-left lawmakers are on record promoting paid leave, childcare, "caregiving," police accountability, affordable housing, fighting "climate change" and packing the Supreme Court as "infrastructure."

Again, we warned you that Democrats would use their first "infrastructure" proposal as leverage to immediately pass a radical, highly partisan, $3.5 trillion spending bill via budget reconciliation. That's exactly what happened, and the "human infrastructure" legislation won't require a single GOP vote to become law!

Schumer needs 60 votes to pass the smaller "infrastructure" bill and 50 votes to advance the larger one. That means at least 10 Republicans will have to "break ranks" and vote "Yes" for the first legislation to pass the Senate, and he'll need both Sen. Manchin AND Sen. Tester to back the second. Otherwise, neither will reach Joe Biden's desk.

Click here to fax GOP Senators now. Urge them to stand firm and stay united so "Biden's Boondoggles" don't become law. Tell them NOT to let Democrats define "infrastructure" as whatever they say it is! To send your own faxes, click here for a list of "Stop Biden's Boondoggle!" targets and their contact information. Thank you, in advance, for taking action today.

P.S. Merriam-Webster Dictionary defines "boondoggle" as "a wasteful or impractical project or activity." The Biden regime's latest boondoggles add up to more than $6 trillion of spending on mostly radical, far-left Democrat wish-lists. America can't afford to tax and spend its way to a "progressive utopia." That's why Grassfire is empowering you to take immediate take action by urging Senate Republicans to fight the runaway, deficit spending in Washington, D.C. Click here to instantly send your "Stop Biden's Boondoggles!" faxes to 50 GOP Senators and Sen. Manchin now for just $30, or reach all 100 U.S. Senators for only $50:

Key Moderate Dems Not Yet On Board With $3.5 Trillion Spending Package (ZeroHedge)