Biden says you're RACIST if you oppose his ELECTION STEAL 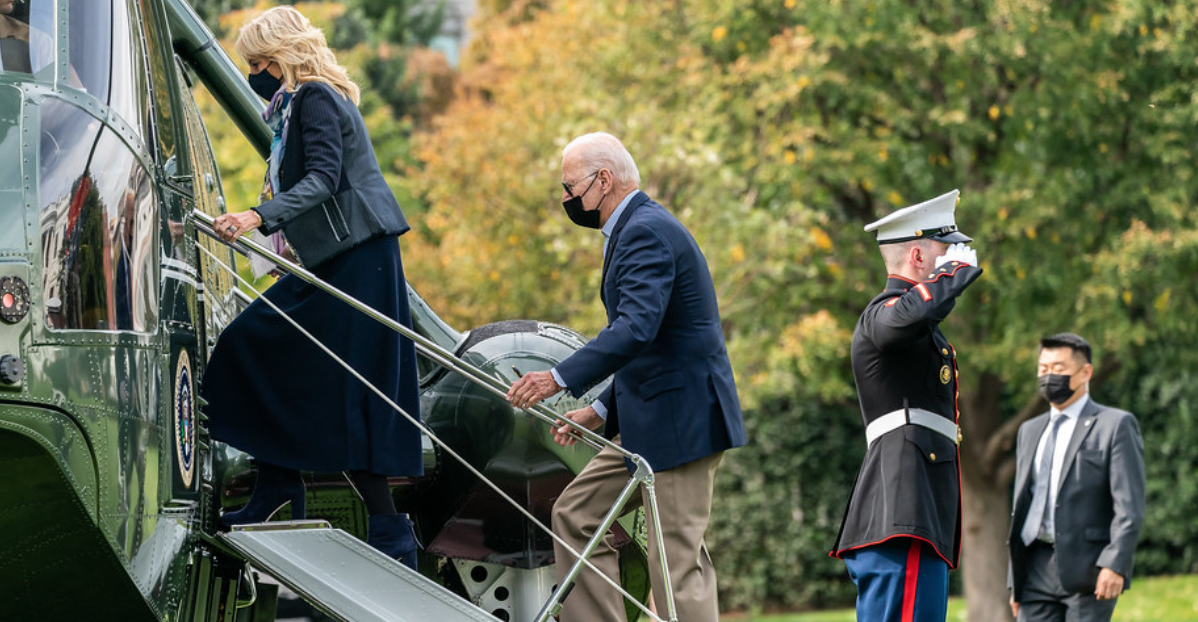 The Wall Street Journal says Joe Biden's "voting rights" speech in Atlanta on Tuesday was "divorced from reality" and "grandiloquent nonsense." The newspaper's editorial board called Mr. Biden's continued use of the term "Jim Crow 2.0" an "incendiary phrase" that simply isn't true:

Mr. Biden's speech in Georgia was a call to bulldoze the Senate's filibuster to pass ... a bill that would impose a federal election code on all 50 states, including forcing them to count late mail ballots that lack postmarks. If you happen to think that’s a bad idea, or that it’s unconstitutional, or that nuking the filibuster would hurt the Senate, well, then apparently you're against Abraham Lincoln. Mr. Biden's demagoguery is all the worse because he continues to distort state voting laws.

Joe Biden, Senate Majority Leader Chuck Schumer (D-NY) and other radical Democrats are plotting an ELECTION TAKEOVER, and they're willing to "nuke" the Senate to get it done. Schumer has set a Monday deadline for Republicans to "work with Democrats" to federalize elections in all 50 states.

That's why Grassfire is empowering our team members to PUSH BACK AGAINST JOE BIDEN'S AND THE UNHINGED LEFT'S PARTISAN POWER-GRAB. Make your voice heard by telling Senators where you stand! Click here or on the banner below now to sign the national petition to "PROTECT OUR ELECTIONS!":

Republican Senators, along with moderate Democrat Sens. Kyrsten Sinema (AZ) and Joe Manchin (WV), need to know that "America First" patriots stand with them in the fight to stop the "Freedom to Cheat Act"! from becoming law.

If you want us to represent you in the halls of Congress, you MUST click here to sign now. You CAN take action to push back against the "The Corrupt Politicians' Act." Thanks, in advance, for making your voice heard today.

P.S. If you missed last night's ELECTION STEAL update, we've included it below. See the clear evidence that we're living in a time of two Americas. Find out what you can do to be on the right side of the battle to PROTECT OUR ELECTIONS. Click here or on the banner below to sign the national petition:

We live in a time of two Americas. It's evident in the reactions to Joe Biden's hugely divisive "voting rights" speech in Atlanta on Tuesday. Grassfire agrees with Senate Minority Leader Mitch McConnell, who called it "incorrect, incoherent and beneath his office." Also on Wednesday, McConnell said Mr. Biden's actions were "profoundly unpresidential" and that he was "shouting that 52 Senators and millions of Americans are racist unless he gets whatever he wants."

Tucker Carlson rails against Joe Biden's rant in an opinion piece on the FOX News website. He writes that Tuesday's message was clear: "Give me total power over your life or else I know you're a dangerous radical." Carlson also warned that "if you oppose an unconstitutional power grab by corrupt politicians," the Biden regime considers you a "racist," a "terrorist" and a "foreign combatant."

In the "other America" -- the progressive, utopian, police state that radical Democrats want -- House Speaker Nancy Pelosi (D-CA) called Mr. Biden's address "wonderful" and "fabulous." When challenged on the divisiveness of Mr. Biden's speech, White House Press Secretary Jen Psaki said it was "hilarious" that anyone would question its tone and content. (Calling millions of Americans racist terrorists is, apparently, just fine with the Unhinged Left.)

Majority Leader Chuck Schumer (D-NY) and his fellow radical Democrats in the Senate want to STEAL FUTURE ELECTIONS! And they're willing to kill the 60-vote filibuster to do it! The far-Left is fighting their ideological war on several fronts in hopes of making it easier to pass Joe Biden's radical, socialist agenda, while also intimidating, censoring and silencing Trump supporters.

Regarding when the Senate will vote on the Democrats' "Freedom To Cheat Act," McConnell's office informed us this morning via email: "We do not know what time today this lark will begin – if it does -- or be drawn out until Monday's MLK Holiday." (Emphasis theirs.)

"America First" patriots know that "voting rights" is Democrat code for hijacking future elections. That's why Grassfire is empowering you to let key Senators know where you stand. If you do NOT want Schumer to -- as McConnell said in October -- "rig the game" (like they did in 2020), click here or on the banner below now to sign the "PROTECT OUR ELECTIONS!" national petition:

McConnell has repeatedly slammed the radical, unhinged Left's ongoing attempts to "federalize all 50 states' elections." Today, he again dubbed the Democrats' attempts to hijack future elections the "Big Lie." His office staff even renamed the "Freedom to Vote Act," calling it the "Freedom to Cheat Act."

Sen. Ted Cruz (R-TX) labeled the legislation "The Corrupt Politicians' Act." During a Senate Rules Committee hearing in May, Cruz also called this "partisan power-grab" by Democrats: "The most radical legislation the Senate has considered in the nine years I've been here. ... This legislation is designed to ensure that Democrats never lose another election."

Sen. Rand Paul (R-KY) insisted on Newsmax last week that the far-Left narrative of voter suppression is ''a pack of lies." That's why Republican Senators need to know that "America First" patriots stand with them in the fight to PROTECT OUR ELECTIONS! Thankfully, Sinema and Manchin STILL support the filibuster. This is your chance to tell them to stand firm and stay united against Schumer's partisan power-grab.

+ + Make Your Voice Heard In The Fight To PROTECT OUR ELECTIONS!

Grassfire mobilized the delivery of more than 30,000 "Protect Our Elections!" petitions on Capitol Hill THIS WEEK. If you want your name to be included in our next delivery, we MUST hear from you! Thanks, in advance, for making your voice heard today.

P.S. With Republicans likely to gain control of the House and Senate in the 2022 midterms, the Unhinged Left is entering panic mode. Schumer is pushing the "Freedom to Cheat Act" THIS WEEK in a blatantly partisan effort to STEAL FUTURE ELECTIONS. This legislation is dangerous, un-American and seeks to tilt ALL future elections toward Democrats. Click here or on the banner below to sign the national petition to "Stop The Corrupt Politicians' Act!":

Are You With Joe Biden, or Jefferson Davis? (The Wall Street Journal)

Transcript: Remarks by President Biden on Protecting the Right to Vote (The White House)