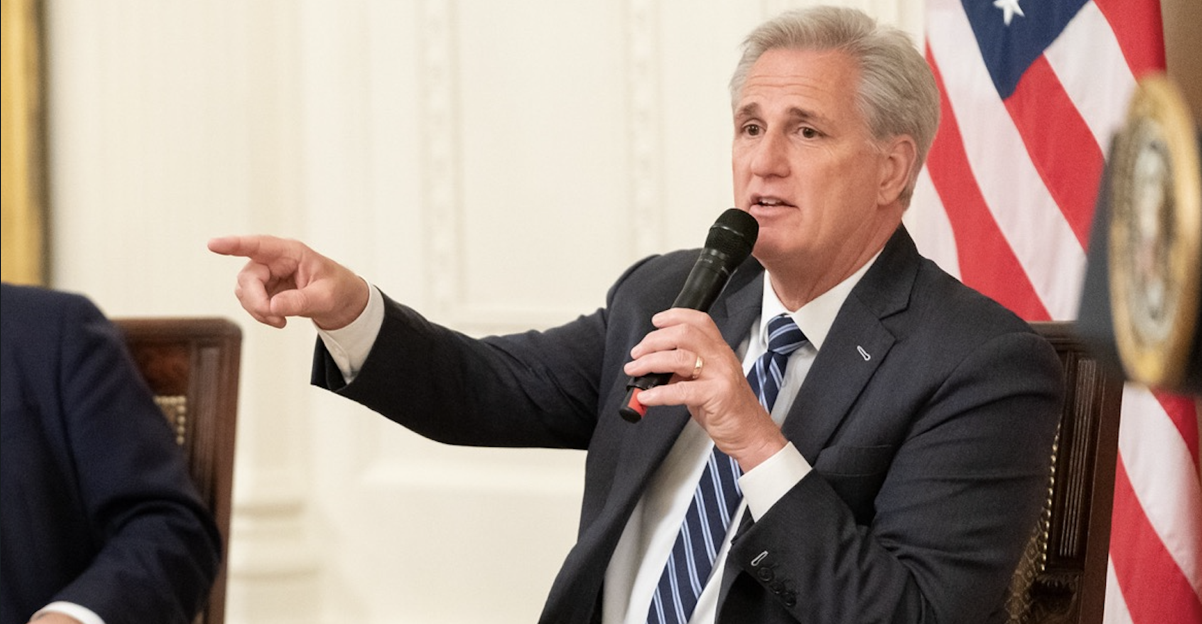 House GOP leader Kevin McCarthy (R-CA) has come out swinging AGAINST Joe Biden's latest TRILLION-DOLLAR SPENDING SCAM. As reported in our previous update (see below), Democrats and "Uni-Party" RINOs (Republicans In Name Only) finally released their $1.7-TRILLION "omnibus" bill this morning. The "Biden Boondoggle" is business as usual in Washington, D.C. The bill is a monstrosity that wastefully spends taxpayer money, including earmarks and political "kickbacks" to the powerful and well connected.

Thankfully, for the sake of "America First" patriots, McCarthy isn't having any of it. Shortly after the massive, SPENDING SCAM became public, the man who's likely to become Speaker of the House on January 3, 2023, threatened any and all Republican Senators who vote "Yes" on funding Joe Biden's "America Last" agenda through the remaining nine months of the fiscal year. In response to a Twitter post this morning about House GOP efforts to "whip" opposition to the SPENDING SCAM, McCarthy replied:

Agreed. Except no need to whip—when I'm Speaker, their bills will be dead on arrival in the House if this nearly $2T monstrosity is allowed to move forward over our objections and the will of the American people.

Senate RINOs are so afraid of FAKE NEWS and the Woke Mob that they're refusing to stand up to the Biden Regime and stop ANOTHER massive SPENDING SCAM. The $1.7-TRILLION "Biden Boondoggle" unveiled by the Senate today is even worse than expected. It's the kind of runaway Big Government that has already raised inflation, increased energy costs and pushed the U.S. economy into recession.

Maybe McCarthy's threat will work, and maybe it won't. But at least he's doing something as a Republican leader to prevent this "Nightmare Before Christmas." As the likely future House Speaker in two weeks, he's taking action by urging/threatening GOP Senators NOT to deliver a giant, $1.7-TRILLION lump of coal to the American people this week.

Votes on fully financing the Biden Regime's "America Last" agenda until September 30, 2023 -- to the tune of $1.7 TRILLION -- are expected to begin soon. At least 41 Senators need to stand together and stay united to stop Democrats and Uni-Party RINOs from pulling another fast one on "We the People" by maintaining the status quo.

Grassfire is empowering you to engage in the fight to stop spineless, weak-kneed RINOs -- especially in the Senate -- from giving in to the radical, unhinged Left and Woke Mob. Democrats demand; the GOP caves; and another manufactured crisis on Capitol Hill is "solved" at the expense of American taxpayers: Lather. Rinse. Repeat.

Don't let Democrats and RINOs flee D.C. for Christmas, while grinning and patting themselves on the back for sticking it to American taxpayers AGAIN! Fight back against this "lame duck" Congress and their dirty, backroom deal to fund the failed, tyrannical Biden Regime FOR THE NEXT NINE MONTHS!

If you missed this morning's message, please see below. Also, watch your inbox for future Grassfire updates about the Uni-Party "elite's" plans to pass this "Nightmare Before Christmas" and fully fund their "America Last" agenda until September 30, 2023. Thanks, in advance, for taking action to "Stop The Spending Scam!" by faxing up to 85 Senate offices on Capitol Hill now.

P.S. If you're outraged by ANY Republican supporting another Biden Regime SPENDING SCAM, take action now. This "Nightmare Before Christmas" is a HUGE slap in the face to hard-working American taxpayers AND to voters who gave Republicans control of the House. The new Congress, which convenes on January 3, 2023, should set spending priorities for the rest of the fiscal -- not lame-duck lawmakers. Go here to fax key Senators now: