Thanks for taking action! Now...

Thank you for taking action to EXPOSE the Democrats' SPENDING SCAM! The Biden regime reportedly wants more than $7 trillion in taxpayer money for a Democrat wish-list of progressive, pork spending. Grassroots patriots MUST take immediate action if they want to stop it! Two proposed "infrastructure" bills are really about financing a radical, far-left agenda on the backs of hard-working, American taxpayers. 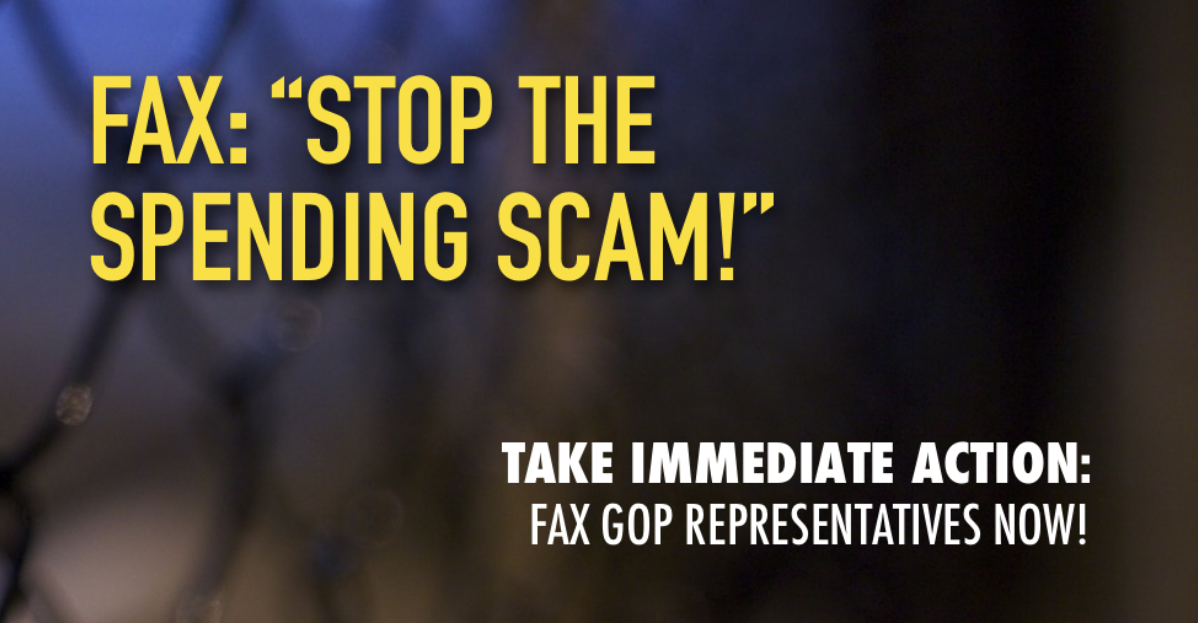 The House of Representatives is expected to vote THIS WEEK on the first, fake $1.2-trillion "infrastructure" bill that will only spend 10% of the money on roads, bridges, etc. Even that's not enough for some far-left Democrats. They're demanding Congress pass another $6 trillion in progressive, pork spending on "human infrastructure"!

Take action now to call on House Republicans and two key Democrats to vote AGAINST the radical, unhinged Lefts SOCIALIST SPENDING SCAM. Send your personalized faxes now to INSIST they vote "NO!" on this unsustainable, un-American, Big Government boondoggle.

Grassfire has updated our "Stop The Spending Scam!" FaxFire to empower you to call on GOP Reps to reject this blatantly socialist legislation. Rush your personalized message to Capitol Hill now to protest these obscene, $1.2-trillion and $6-trillion cash-grabs for Democrat special interests! Don't let them push America into full-blown socialism!

Our "Stop The Spending Scam!" FaxFire empowers you, as a GrassfireVIP, to reach Sen. Krysten Sinema (D-AZ), Sen. Joe Manchin (D-WV) and more than FOUR DOZEN Republican lawmakers, including EVERY MEMBER of the House Freedom Caucus for just $5! If possible, go the "extra mile" and select LEVEL TWO (Bigger Impact) and LEVEL THREE (Biggest Impact) to reach dozens more lawmakers at even larger discounts. Take action now by completing the form below and making your voice heard.

To encourage maximum participation from our team members, we discounted EACH LEVEL of this urgent FaxFire at special VIP rates! Once you select your fax level below, you'll be directed to a page where you can customize your "Spending Scam" fax message and finalize your order.

Sign in with or
Don't have an account? Click here to create one.
Please check your e-mail for a link to activate your account.
No recent activity
Tell House Republicans: "Stop The Spending Scam!" Demand the GOP take immediate action against the $4.7 trillion Democrat wish-list of new government spending. Go here:
Thanks for taking action! Now...
Read the blog at Grassfire