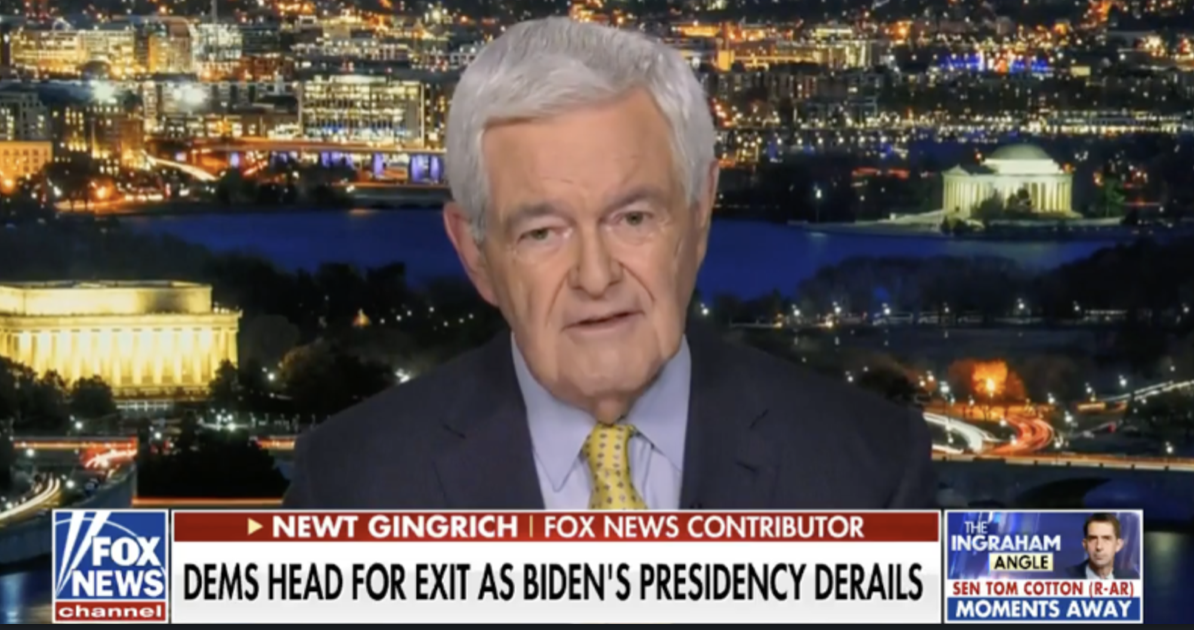 Grassfire updates related to the horribly misnamed Inflation Reduction Act of 2022 have been warning team members about the bill's many threats to the U.S. economy and "We the People." Yesterday, we shared a one-sheet from the GOP House Ways and Mean Committee explaining how the Biden regime's latest "Build Back Broke" boondoggle "will supercharge [a] long history of IRS abuses."

Former House Speaker Newt Gingrich agrees. During an appearance on FOX News last night, the Georgia Republican dubbed the $740-billion SPENDING SCAM the "Manchin Monstrosity." He also called out Democrats for their plan to exponentially grow the size and scope of the IRS:

"Proposing 87,000 new Internal Revenue Service agents, that's more than we currently have total, so more than double the IRS agents. These people don't hear anything. They don't understand that Biden is in trouble, but I think the whole Democratic Party model is in trouble because they are so radically out-of-touch with the American people, and they can't deliver on daily life, on goods and services."

The Wall Street Journal also warned this week: "The IRS Is About to Go Beast Mode". The newspaper's editorial board wrote in yesterday's edition:

Progressives want Joe Biden to unleash what they call "beast mode" executive power, and the Schumer-Manchin tax bill supplies the cash to turn the Internal Revenue Service into Wolverine.

The pact between Sen. Joe Manchin (D-WV) and Majority Leader Chuck Schumer (D-NY) includes $80 billion in new funding for the tax man. Democrats claim this "investment" will yield more than $200 billion in revenue. That estimate is highly speculative, but if it's anywhere close to right IRS auditors will soon be coming after tens of millions of Americans. ...

The federal government isn't starving for revenue. Congress wants more tax revenue because it can't control its appetite for spending. That's why it wants a tax agency in beast mode.

If you don't think The Inflation Reduction Act of 2022 is bad for America -- really bad -- maybe you're not paying attention. If you're OK with the federal government sending the IRS into "beast mode" with 87,000 new agents to audit millions more Americans, simply delete this email and do nothing.

However, if you DO think the $740-billion SPENDING SCAM is outrageous and must be stopped, Grassfire is empowering you to take immediate action. Make your voice heard using our unique FaxFire system to rush your personalized message to Capitol Hill.

Click here or on the banner below now to instantly fax 40 key Republican Senators and Sen. Manchin for just $30. Or reach 44 additional Democrat Senators with "Stop The Spending Scam!" faxes (up to 85 total) for only $50:

Reports today indicate Schumer is pushing for the first Senate votes on the Inflation Reduction Act as soon as TOMORROW. The runaway government spending embedded in the Biden regime's "Build Back Broke" boondoggle will finance wasteful "climate change" initiatives, prop up ObamaCare AND supercharge the IRS!

This $740-BILLION, dirty, backroom deal negotiated by Schumer and Manchin threatens to increase inflation, push the U.S. economy further into a recession and unleash the IRS against conservatives and people of faith! The good news is there's still time to take action to fight the grossly misnamed Inflation Reduction Act of 2022 using Grassfire's unique FaxFire system.

If you reject the radical, unhinged Left trying to use hundreds of billions more taxpayer dollars to America into a woke, progressive, police state, click here to call on Senators to "Stop The Spending Scam!" Fax your personalized message directly to Capitol Hill for only $30. To send your own faxes, click here for Grassfire's list of Senate targets and their contact information. Thanks, in advance, for taking action this evening.

Newt Gingrich: Biden and his party are 'radically out-of-touch' with the American people (FOX News)