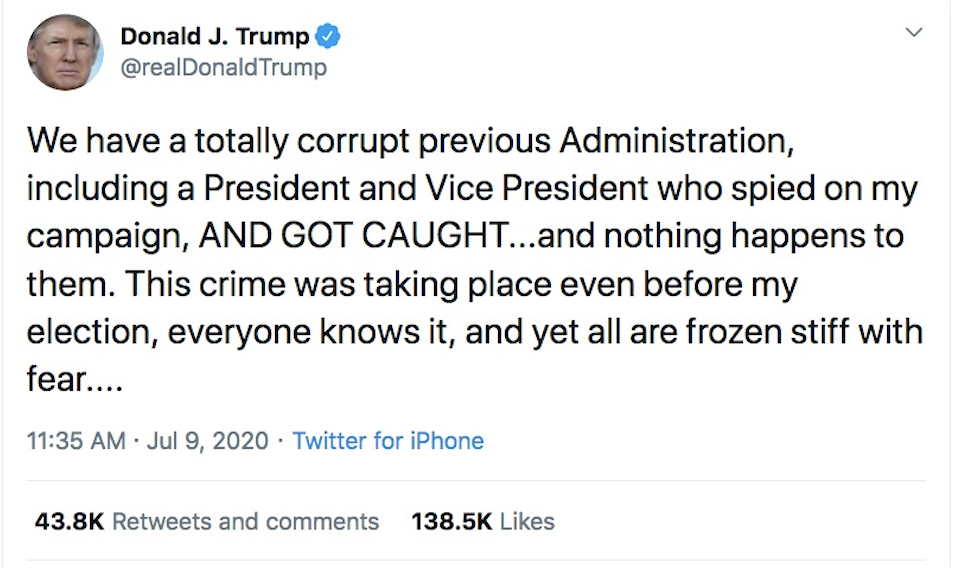 Many people are familiar with the phrase, "Justice delayed is justice denied." That's EXACTLY what President Trump and conservative Americans could experience if yesterday's report is true. The Department of Justice (DOJ) may wait to complete its investigation into ObamaGate until AFTER the presidential election. According to a FOX News "exclusive":

U.S. Attorney John Durham is under pressure to wrap up his investigation into the origins of the Russia probe by the end of the summer, but if he doesn’t, he could wait to reveal his findings or initiate prosecutions until after the 2020 presidential election... The source also told FOX News that Durham "does not want this to be viewed political," and the closer it gets to November, Durham could "punt it to after the election."

President Trump appeared to have received word of the possible delay shortly before FOX News reported it. He unleashed a tweet storm just before noon ET yesterday. The Commander-in-Chief raged against the lack of action by Republicans, the DOJ and others to expose alleged corruption in the Obama administration. Here are some excerpts from his Twitter feed:

We have a totally corrupt previous Administration, including a President and Vice President who spied on my campaign, AND GOT CAUGHT...and nothing happens to them. This crime was taking place even before my election, everyone knows it, and yet all are frozen stiff with fear....

....No Republican Senate Judiciary response, NO "JUSTICE", NO FBI, NO NOTHING. Major horror show REPORTS on Comey & McCabe, guilty as hell, nothing happens. Catch Obama & Biden cold, nothing. A 3 year, $45,000,000 Mueller HOAX, failed - investigated everything....

This is about PROSECUTORIAL MISCONDUCT. We catch the other side SPYING on my campaign, the biggest political crime and scandal in U.S. history, and NOTHING HAPPENS. But despite this, I have done more than any President in history in first 3 1/2 years!

If you think the American people deserve a full investigation into this alleged anti-Trump conspiracy, utilize Grassfire's unique FaxFire system to make your voice heard now. Take action now to demand Senate Republicans stand with and defend the President!

Click here or on the banner below to schedule your "Investigate ObamaGate" faxes for immediate delivery to congressional offices on Capitol Hill:

+ + It's Time To EXPOSE ObamaGate!

As chairman of the Senate Judiciary Committee, Sen. Lindsey Graham (R-SC) can subpoena former Obama administration officials to get to the bottom of the scandal. But so far, he's only called ONE WITNESS to appear before the committee and has NOT issued a single subpoena to compel key figures to testify.

In May, Graham released a list of 53 Obama-era officials he said he wants to subpoena. It reads like a veritable "Who's Who" from the previous administration! The names include former FBI Director James Comey, former FBI deputy director Andrew McCabe, former CIA Director John Brennan, former National Security Advisor Susan Rice, former Director of National Intelligence James Clapper, former U.S. Ambassador to the U.N. Samantha Power, and dozens of others.

In an email yesterday, we told you how the clock is ticking on ObamaGate. Yet, Graham currently doesn't have even ONE Senate Judiciary Committee hearing scheduled to investigate the scandal. What is he waiting for?!

ObamaGate MUST be exposed! Fax Sen. Graham and other key Senators now. Demand accountability and call on lawmakers to take immediate action! Click here to schedule your faxes now for instant delivery in our nation's capital.

P.S. ObamaGate could be THE greatest political scandal in U.S. history -- all designed to undermine Candidate, President-elect AND President Trump! Months ago, Sen. Graham called FBI efforts to undermine our Commander-in-Chief "the tip of the iceberg." As committee chairman, he has the power to subpoena witnesses but hasn't yet. What is he waiting for? Grassroots Americans must push Graham and other Senate Republicans to EXPOSE ObamaGate. Click here or on the banner below to demand the GOP stand with the President and investigate the actions of former Obama administration officials: