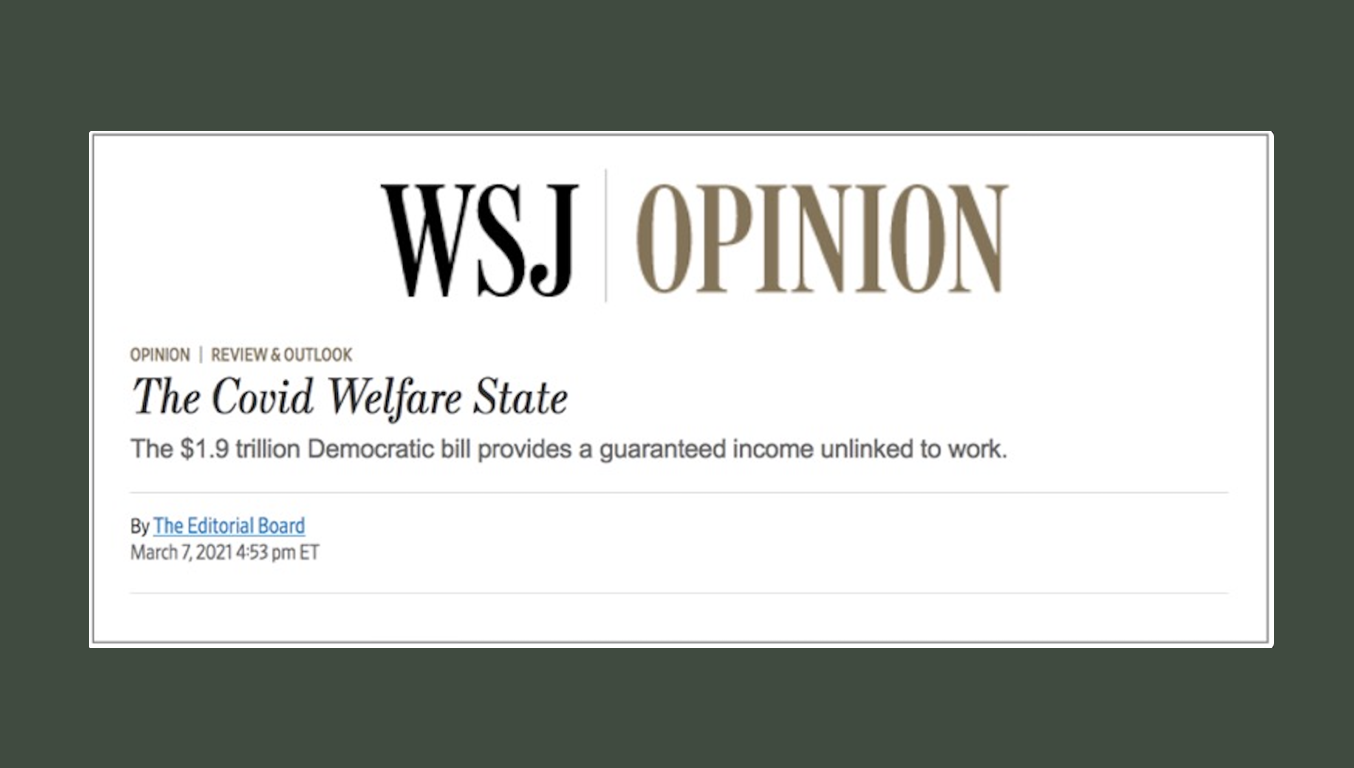 In a bumbling (and somewhat concerning) speech on Saturday, Joe Biden celebrated Senate passage of H.R.1319, The American Rescue Plan Act of 2021. The Commander-in-Thief claimed that the Democrats' $1.9 trillion COVID boondoggle was endorsed by "the vast majority of economists -- left, right and center -- from Wall Street to the... private economic polling initiatives." (Click here to watch the video.)

But The Wall Street Journal disagrees -- strongly -- with the legislation. In an opinion piece published today, the newspaper's Editorial Board wrote: "The $1.9 trillion Democratic bill provides a guaranteed income unlinked to work." The article, entitled "The Covid Welfare State," also warns:

Only a small part of what Democrats passed is for pandemic or economic relief. It’s mainly a way station on their high-speed train to a cradle-to-grave welfare-entitlement state. Most of the $1.9 trillion will flow to government unions or supposedly temporary income transfers that Democrats intend to make permanent later this year.

For weeks, Grassfire has been echoing the voices of GOP leaders in the House and Senate. We've been telling our team members, "This is NOT a COVID relief bill! It's a Democrat 'wish list' of liberal, pork spending that will finance a far-left, anti-faith and anti-American agenda." That's why House Republicans call the bill "Pelosi's Progressive Payoff."

House Speaker Nancy Pelosi (D-CA) has scheduled a final vote TOMORROW (Tuesday) that could send the egregiously misnamed bill to the Oval Office later this week to be signed into law. But victory for radical Democrats and the Unhinged Left is not guaranteed, especially since H.R.1319 passed the House the first time by a slim 219-to-212 margin. Click here to take immediate action to "Stop The COVID Boondoggle!"

The precarious balance of power in the House of Representatives means that only a few party defectors are needed to swing the vote away from Pelosi and toward Republicans. Two "moderate" Dems, Jared Golden of Maine and Kurt Schrader of Oregon, voted against the original bill. If just four more Democrats come to their senses, they could usher in a huge win for fiscal responsibility and common sense.

But first, Republicans MUST stand firm and stay united to stop The American Rescue Plan Act of 2021! Less than 9% of the $1.9 trillion goes to public-health spending related to the pandemic. Urge GOP Representatives to keep fighting the Dems' COVID boondoggle. Reach into House offices on Capitol Hill, right now -- before H.R.1319 reaches the White House and is signed into law!

Take immediate action to keep Democrats from bankrolling their extreme, radical, liberal agenda under the guise of "COVID relief." Make your voice heard using Grassfire's "Stop The COVID Boondoggle!" FaxFire. Click here or on the banner below to instantly fax your Representative, key GOP House leaders and the entire House Freedom Caucus -- up to 51 faxes for only $25! For just $50, you can reach 100 Republican House members. Or contact all 213 GOP Reps for the unheard of price of $70 -- less than $.33 per fax!

ATTENTION GRASSFIRE VIPS: CLICK HERE TO SEND YOUR "STOP THE COVID BOONDOGGLE!" FAXES AT AN 80% DISCOUNT!
(Not a VIP? Go here to sign up and send all your faxes at huge discounts.)
(Having trouble accessing your benefits? Go here.)

The $1.9 trillion COVID boondoggle is a nightmare that would plunge America further into debt, while taking a giant step toward socialism. After Congress signed a $3.5 trillion "stimulus" bill last year, the U.S. deficit rose to the highest percentage of GDP since World War II. This highly partisan and socialist-leaning legislation is the Democrats' gateway to "universal basic income." H.R.1319 incentivizes living off taxpayer handouts rather than working. That's unsustainable and unAmerican!

Also, The American Rescue Plan Act of 2021 funnels billions of dollars in taxpayer money to "blue states" for enacting unconstitutional shutdowns, lockdowns and closures during the COVID pandemic. Democrat "leaders" will be rewarded for destroying their economies, killing millions of jobs and keeping kids out of school. Finally, H.R.1319 forces half the country to finance a radical, liberal, anti-faith, anti-American agenda they voted AGAINST on Election Day.

If you want to see The American Rescue Plan Act of 2021 defeated in the House, take action now against what GOP leaders call "this nearly $2 trillion dollar behemoth legislation." Click here to immediately fax up to 51 House Representatives for just $25, and demand they "Stop The COVID Boondoggle!" Thanks, in advance, for taking action!

P.S. If possible, please "go the extra mile" by selecting the "Bigger Impact" LEVEL TWO faxes and reach 50 additional GOP Reps for $45. Choose LEVEL THREE faxes to make the "Biggest Impact" and reach EVERY Republican Representative -- all 213 of them -- for just $70. That's less than $.33 per fax! Click here or on the banner below to act now: