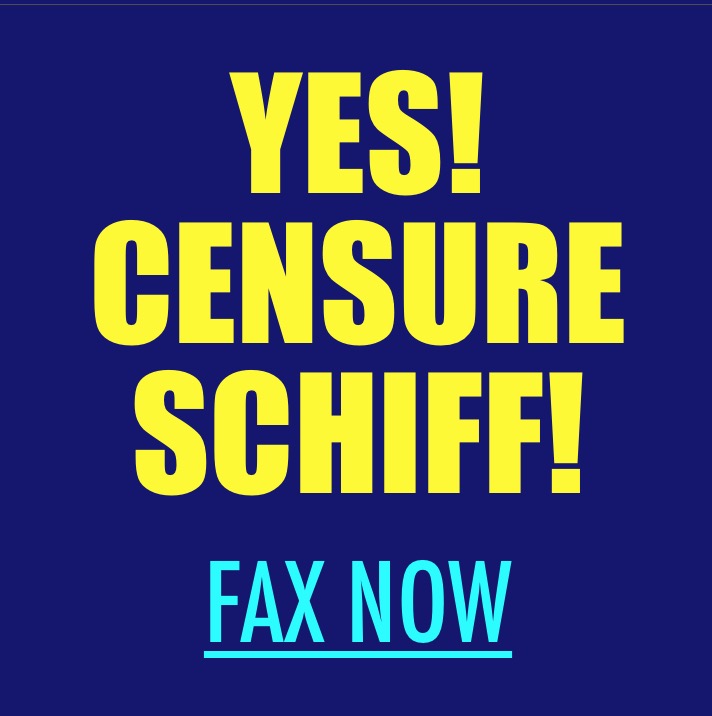 As the self-appointed leader of the Democrats’ ridiculous impeachment campaign against President Trump, House Intelligence Committee Chairman Adam Schiff (D-CA) has been accused of lying and fabricating details in an effort to increase support for removing our duly elected Commander-in-Chief from office. (That's why the President refers to him as "Shifty Schiff" in his tweets.)

House Resolution 604 would condemn and censure Schiff for reading a fictional phone call between Mr. Trump and Ukrainian President Volodymyr Zelensky into the record. Schiff also is suspected of lying about having NOT spoken to the “whistleblower,” whose second-hand account of the actual July phone call between the two leaders started this second Witch Hunt against the President.

A vote on H. Res. 604 is expected in the House of Representatives tonight -- Monday, October 21, 2019 -- at 6:30 p.m. ET. As of this morning, 173 Republicans stand united in to condemning and censuring Schiff for his egregious acts of deception. But remarkably, 23 House GOPers have yet to co-sponsor the bill. Breitbart reports:

The legislation has quickly gained support from Republicans across the political spectrum. House Freedom Caucus conservatives, moderates, and House GOP leadership have all backed the legislation.

So what's holding up the remaining 23 Republican House members from signing on as co-sponsors of the bill? Why aren't they standing with their own party and their President to push back against Schiff and his fellow Democrats?

To give you a voice before tonight's expected vote to reprimand and punish the House Intelligence Committee Chairman, Grassfire is launching an EMERGENCY FAXFIRE. Please consider sending personalized CENSURE SCHIFF faxes, right now, to your Representative, those 23 House Republicans who have yet to take action, and other key targets in the House. Click here or on the banner below to immediately send your CENSURE SCHIFF faxes to lawmakers on Capitol Hill:

Democrat efforts, like Schiff's, to deceptively to take down our Commander-in-Chief MUST BE STOPPED! That's why Grassfire has added significant discounts to our emergency CENSURE SCHIFF FaxFire. When you utilize Level 2 of the CENSURE SCHIFF FaxFire, you can instantly send a personalized message to every member of the House Freedom Caucus at a 40% DISCOUNT! Level 3 of this urgent FaxFire empowers you to also reach 44 vulnerable House Democrats at a 50% DISCOUNT!

Click here or on the banner below to immediately send your faxes for less than $.50 each!

If you're outraged by Rep. Schiff's divisive and deceptive tactics in this Witch Hunt against President Trump, Grassfire invites you to utilize our unique FaxFire system. Rush your CENSURE SCHIFF faxes directly to your Representative; the 23 House GOPers who haven't taken action yet; and dozens of other key House targets -- FOR A 40% TO 50% DISCOUNT.

Grassfire feels so strongly about the need for our team members to take action, that we've lowered the price on all three levels of the CENSURE SCHIFF FaxFire. Act now to demand House members condemn and censure Schiff for fanning the flames of this impeachment-inquiry Witch Hunt with lies and fabrications! Fax your personalized message to Capitol Hill offices now for less than $.50 each! Go here to fax now.

P.S. Democrats need to stop trying to undo the results of a free and fair election. If they want President Trump to leave office, they need to take the advice of former president Barack Obama. Responding to critics in 2013, he said, "You don't like a particular policy or a particular president? ... Go out there and win an election." If you think Democrats should stop their attempted coup and House Republicans should officially condemn and censure Schiff, take immediate action! FAX your Representative and other key House members to demand they CENSURE SCHIFF now: