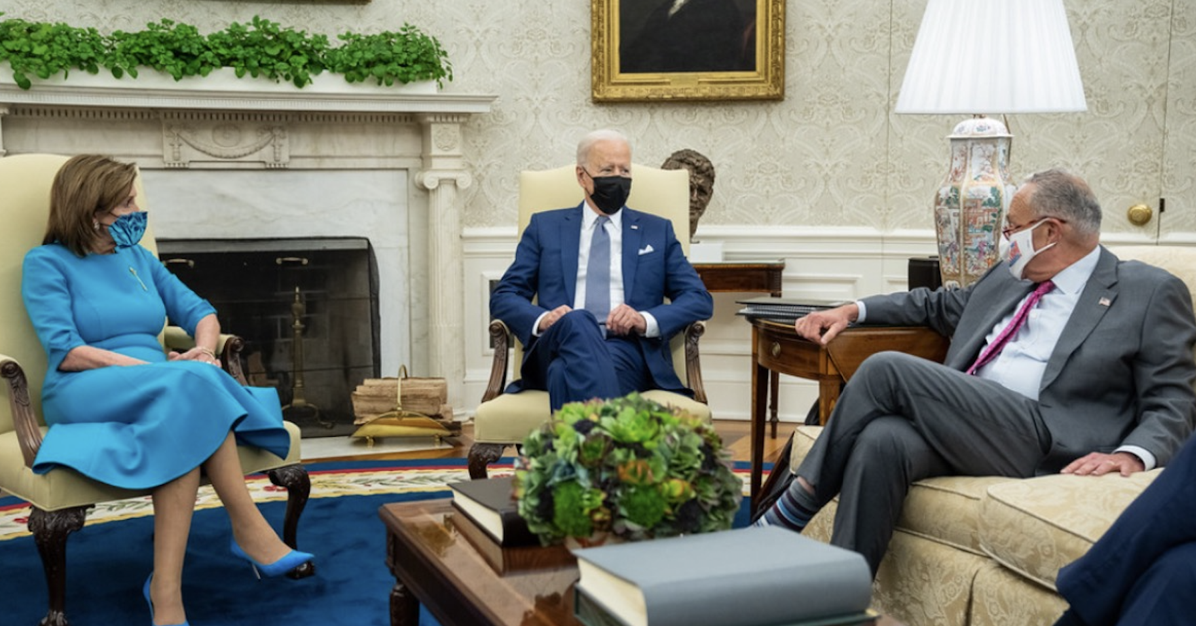 Radical Democrats have "gotten religion" recently, when it comes to the Senate filibuster. All of a sudden, it seems, the Unhinged Left just hates the idea of needing 60 votes to pass legislation in the Upper Chamber. But in 2005, then-Senator Joe Biden (D-DE) rejoiced at the existence of the filibuster, saying:

"When one party, when one interest, controls all levers of government, one man or one woman can stand on the floor of the Senate and resist, if need be, the passions of the moment."

He also warned against "the nuclear option," insisting it "would turn this country into a banana republic." But now that the Democrat party "controls all levers of government" in our nation's capital -- the House, Senate and White House -- the radical, unhinged Left wants free rein to pass Joe Biden's radical, ultra-far-left, socialist agenda.

The Wall Street Journal insists Schumer is trying "to blow up the Senate to blow up valid state election laws." The newspaper's editorial board wrote this week that his goal to eliminate the filibuster, which requires 60 votes to end debate and vote on legislation, is "not to protect democracy but ... for partisan gain." The Epoch Times reports:

Republicans argue the [Democrat-led] reforms — the John R. Lewis Voting Rights Advancement Act and the Freedom to Vote Act — severely limit or eliminate entirely the use of photo IDs and related ballot security measures, and require that all proposed changes to state election laws have prior Department of Justice (DOJ) approval. Measures such as strengthening voter identification requirements are highly popular with the public, with recent surveys by Rasmussen, Monmouth, Pew, and AP-NORC finding 72 to 80 percent support for requiring photo IDs to vote.

That's why the GOP is pushing back. You can join them by taking immediate action to PROTECT OUR ELECTIONS using Grassfire's unique FaxFire system. Instantly send personalized faxes to Schumer, all 50 GOP Senators and key moderates -- Sens. Kyrsten Sinema (D-AZ) and Joe Manchin (D-WV) -- for only $30! Click here or on the banner below to fax Senate offices in Washington, D.C. now:

👉 ATTENTION GRASSFIRE VIPS: GO HERE TO SIGN IN AND SEND YOUR "STOP THE CORRUPT POLITICIANS' ACT" FAXES FOR 80% OFF! Not a VIP? Go here to send this fax at an 80% discount. (Trouble accessing your benefits? Go here.)

McConnell has repeatedly slammed the radical, unhinged Left's ongoing attempts to "federalize all 50 states' elections." This week, he dubbed the Democrats' attempts to hijack future elections the "Big Lie." His office staff has even renamed the "Freedom to Vote Act" and calls it the "Freedom to Cheat Act."

Sen. Ted Cruz (R-TX) labeled the legislation "The Corrupt Politicians' Act." During a Senate Rules Committee hearing in May, Cruz also called this "partisan power-grab" by Democrats: "The most radical legislation the Senate has considered in the nine years I've been here. ... This legislation is designed to ensure that Democrats never lose another election."

Sen. Rand Paul (R-KY) insisted on Newsmax this week that the far-Left narrative of voter suppression is ''a pack of lies." That's why Republican Senators need to know that "America First" patriots stand with them in the fight to PROTECT OUR ELECTIONS! Click here to fax them now.

+ + Take Immediate Action To Protect Our Elections And Stop "The Corrupt Politicians Act"!

Again, Schumer and other radical Democrats are using the January 6th Capitol breach as a pretext to pass their misnamed "Freedom to Vote Act." The anniversary of last year's protest by Trump supporters is their justification to change Senate rules, "nuke" the 60-vote filibuster, and pass Joe Biden's radical, far-Left agenda.

With Republicans likely to gain control of the House and Senate in the 2022 midterms, the Unhinged Left is entering panic mode. Schumer is pushing the "Freedom to Cheat Act" THIS WEEK in a blatantly partisan effort to STEAL FUTURE ELECTIONS.

Use Grassfire's "Stop The Corrupt Politicians' Act!" FaxFire now to reach all 50 GOP Senators -- and Sens. Schumer, Sinema and Manchin -- for just $30. Demand they PROTECT OUR ELECTIONS! If possible, go the "extra mile" and select our LEVEL TWO FaxFire. Reach EVERY member of the United States Senate, 100 faxes in all, for only $50 -- a 50% discount. Click here to have your personalized faxes instantly delivered to Senators on Capitol Hill.

The far-Left is fighting their ideological war on several fronts. In addition to rigging elections for Democrats, they want to kill the Senate filibuster to make it easier to pass Joe Biden's radical, socialist agenda, while also intimidating, censoring and silencing Trump supporters.

Click here to make your voice heard to PROTECT OUR ELECTIONS! To send your own faxes, click here for a complete list of Senate targets and their contact information. Thanks, in advance, for taking action today.

P.S. We're in the process of mobilizing a petition delivery to Senate leaders on Capitol Hill. With Sens. Manchin and Sinema still supporting the 60-vote threshold needed to pass most bills in the Upper Chamber, Grassfire will include both "moderate" Democrats in our "Protect Our Elections!" petition delivery. INCREASE THE IMPACT of that pending delivery by clicking here or on the banner below to take immediate action against the "Freedom To Cheat Act!":