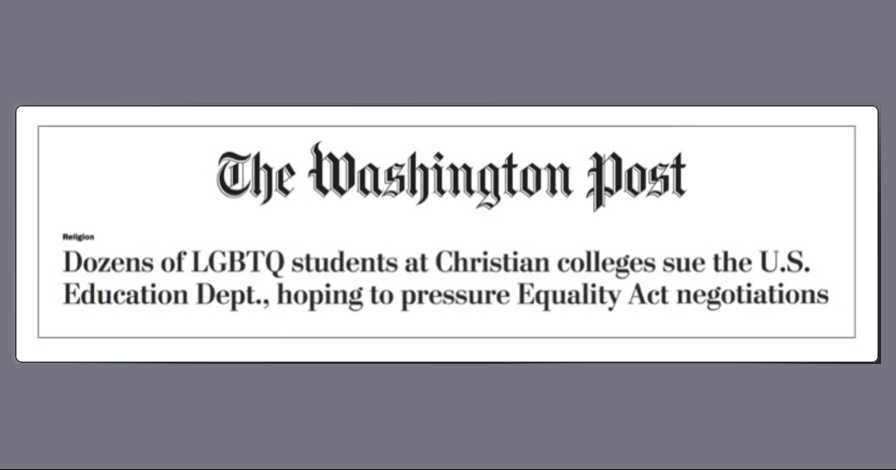 The Washington Post has "said the quiet part out loud" when it comes to the so-called Equality Act (H.R.5). In an online article published yesterday, the newspaper reveals:

The U.S. House recently passed the Equality Act, a sweeping measure that would add gender identity and sexuality to the groups protected under the Civil Rights Act, while significantly weakening exemptions for religious groups and people. While President Biden says he will sign the bill as it is, the Equality Act awaits a vote in the Senate, where it faces an uphill battle. (Emphasis added)

WaPo speaks the truth about the dangerous anti-faith, pro-LGBTQ legislation in a feature story about "dozens" of homosexual and transgender students from Christian colleges and universities suing the U.S. Department of Education. The lawsuit, filed on Monday, targets the religious exemption of 25 schools nationwide that "have discriminatory policies" and receive government funding. The Post correctly states: "The suit — intentionally — comes at a sensitive time."

No one is forcing these students to attend a Christian college or university. There are more than 5,000 undergraduate and graduate schools in the United States. Most of them don't adhere to a biblical code of conduct. But radical Democrats, the Unhinged Left and the "woke mob" want to punish Christian institutions and organizations for refusing to bow to an extreme, far-left, pro-LGBTQ agenda.

The Equality Act may be the GREATEST THREAT to religious liberty and people of faith that America has ever faced. Radical Democrats in Congress are trying to PUSH it to Joe Biden's desk as quickly as possible. Already passed in the House, Senate Majority Leader Chuck Schumer (D-NY) has positioned the bill so he can call a vote on H.R.5 at ANY TIME!

If you oppose this anti-faith, anti-woman, anti-child legislation, make your voice heard! Use Grassfire's unique FaxFire system to send your personalized "Stop The 'Equality' Act!" message to GOP Senators "at this sensitive time." Click here or on the banner below to instantly send your personalized  faxes to all 50 Senate Republicans for just $30, or reach EVERY member of the U.S. Senate (100 faxes) for only $50:

Yesterday, we shared a letter written by Franklin Graham about this "very dangerous" bill. Posted on the Billy Graham Evangelical Association's website, he issued a warning about the misnamed Equality Act becoming law:

This legislation would massively change our moral landscape and silence people of faith who do not agree with the secular values of the Left. But more than muzzling us, they want to force us to pivot—to change direction—instead of trusting God and standing on His Word. If we begin compromising on basic Biblical truths, it will lead to the end of Christianity in this country. We cannot surrender on our watch. We must not remain silent.

The "Equality" Act sacrifices religious liberty on the "altar" of political correctness. Don't think the "cancel culture" of radical Democrats, the Unhinged Left, FAKE NEWS and the "woke mob" won't come for you, your church, or your Christian business next.

P.S. Again, H.R.5 has already passed the House, but the bill needs 60 votes to pass the Senate. That means, 10 GOP Senators must side with Democrats and vote "YES" for the "Equality" Act to become law. If Republicans stand firm and stay united this anti-faith, anti-woman and anti-child legislation WILL NOT PASS! Go here to instantly send your "Stop The 'Equality' Act!" faxes now:

How Many Universities & Colleges are in the US? (Education Unlimited)