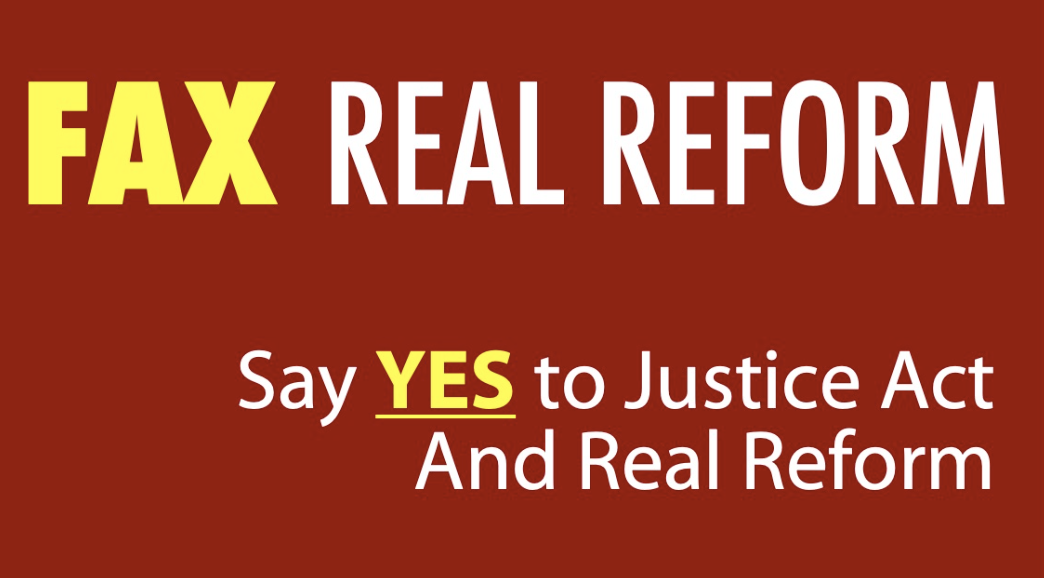 Just minutes ago, Grassfire heard directly from the office of Senate Majority Leader Mitch McConnell (R-KY). The Senate WILL VOTE TODAY on the JUSTICE Act police-reform bill, even though top Democrats want to BLOCK the legislation. (See below for more information.) According the email we received from McConnell's office at 10:11 a.m. ET this morning:

That only gives our team members about an hour to make their voices heard! Take immediate action to support the GOP-sponsored, police reform bill.

Make your voice heard NOW in the push for common-sense police reform. Instantly send a personalized message to your two Senators, your Representative and other key Senators -- up to 15 faxes -- for just $15. Click here or on the banner below to schedule your "Say YES To Real Reform" FaxFire for immediate delivery on Capitol Hill.

Grassroots patriots, like you, can't let Democrats BLOCK the JUSTICE Act! If America wants common-sense police reform, this is the way to get it done without weakening or undercutting law enforcement. See last night's message below for more information on the "Say YES To Real Reform" FaxFire. Thanks, in advance, for taking action today.

A short time ago, Grassfire spoke with a representative in Sen. Tim Scott's (R-SC) office on Capitol Hill. They confirmed that the Senator's police-reform bill, the JUSTICE Act, is likely to be brought to the floor TOMORROW. Also, just before noon today, we received an email from the office of Senate Majority Leader Mitch McConnell's office (R-KY) informing us that:

"The Senate Majority Leader ... filed cloture on the motion to proceed (MTP) to S.3985, the JUSTICE Act."

Cloture allows the Senate to limit consideration of a pending bill to an additional 30 hours of debate. But ABC News reports that Democrats in the "Upper Chamber" are trying to kill the bill -- even before it gets to the floor: "Democrats, backed by leading reform activists, demanded that Senate Majority Leader Mitch McConnell pull the JUSTICE Act ... and open bipartisan negotiations toward a compromise instead."

In light of the civil unrest that continues plaguing several cities across the country, this is a very important bill. Sponsored and introduced by Scott last week, the only African-American Republican in the GOP-controlled Senate, it provides leadership and solutions to institute nationwide reforms aimed at preventing fatal police-related incidents.

Among other things, the "JUSTICE Act" calls for "Use of Force reporting, No Knock Warrant reporting, incentivizing chokehold bans, and increased penalties for false police reports." It also establishes "penalties for failing to ensure correct usage" of body cams; calls for "(m)aintaining and appropriately sharing disciplinary records for officer hiring consideration;" and would make lynching a federal crime.

As a Grassfire team member, you can make your voice heard in the push for common-sense police reform. Using our unique FaxFire system, you can send a personalized message to your two Senators, your Representative and other key Senators -- up to 16 faxes -- for just $15. Click here or on the banner below to schedule your "Say YES To Real Reform" FaxFire for immediate delivery to key lawmakers now:

Grassfire's "Support Our Police?" QuickPoll earlier this month revealed that 98% of our team members stand with the men and women of law enforcement. Only 2% of those who responded want to see police departments defunded as a result of the George Floyd tragedy in Minneapolis last month. In our more recent "Police Reform" QuickPoll, more than three-quarters of Grassfire Nation supports some changes to current law-enforcement techniques.

The Democrat-led House unveiled a very different police-reform bill earlier this month called the "Justice in Policing Act." If passed, it would undercut legal protections for law-enforcement officers. President Trump is unlikely to sign such a bill, so the House version of police reform is basically "dead in the water."

That's why, if grassroots Americans really want to see some kind of positive, useful action to reduce the likelihood of harmful and deadly interactions with police, they need to get behind Scott's JUSTICE Act now.

A vote on the Senate bill is expected by next week. Grassfire will share more information about the vote when it becomes available. Time is short to make an impact and call for real reform by supporting the JUSTICE Act TODAY! (To see a complete list of FaxFire targets and their contact information, go here)

Thanks, in advance, for standing with law enforcement.

P.S. Radical leftists are moving rapidly to defund the police and erase our nation's "Thin Blue Line." Some reform is sure to help reduce deadly interactions with law enforcement. So, Grassfire wants to empower our team members to stand with hundreds of thousands of brave, professional, moral and dedicated men and women put their lives on the line every day to stop and prevent crime. Click here or on the banner below now to schedule your "Say YES To Real Reform!" faxes for immediate delivery on Capitol Hill: