Unexpected opposition to the "Equality Act" 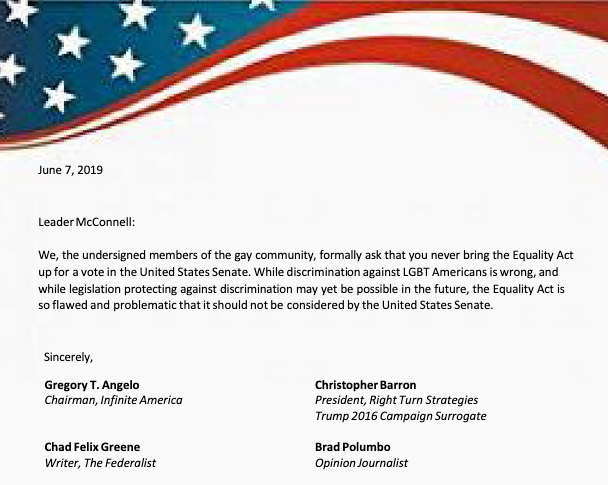 Even as LGBT leaders oppose the Equality Act, this battle is just beginning! That's why, on Thursday morning, Grassfire is delivering our petition opposing the anti-faith Equality Act to Senate leadership ahead of their July 4 week-long recess.

If you oppose the anti-faith Equality Act, CLICK HERE OR ON THE IMAGE BELOW and we will include your name with this week's petition delivery!

+ + Angelo: "I’m not against equality. I’m against the Equality Act."

As Angelo told The Washington Examiner, he and the other LGBT leaders oppose the Equality Act because of its overreach and intrusion into religious liberties.

"Many like me who are gay feel very strongly about the negative consequences if the Equality Act becomes law...It betrays the promises we had made on past campaigns and could destroy all the goodwill we built up with everyday Americans, especially people of faith."

Responding to an outcry from the LGBT community on their stand against the bill, Angelo told The Blade:

"'The Equality Act includes no reasonable exemptions for religious liberty and actually moves the goalposts so far to the left that it runs counter to the types of legislation that gay Republicans have sought for decades, particularly the Employment Non-Discrimination Act,' Angelo said."

For months, Grassfire and other conservative organizations have been warning: The Equality Act is not about equality!

Mary Beth Waddell, a senior legislative assistant at Family Research Council determined, "The 'Equality Act’ is the most extreme threat to religious freedom, free speech, privacy and to women's rights that has ever been proposed in Congress.”

Jessica Anderson, Vice President of Heritage Action warned, "The Equality Act pretends to promote equality and fairness, but it’s a cynical power grab to crush religious freedom and parental rights in the name of political correctness."

Dr. James Dobson warned that the anti-faith Equality Act represents "one of the most egregious assaults on religious liberty ever foisted on the people of this great nation."

Christian leaders including Franklin Graham sent a letter to congressional leaders citing their opposition to the bill: "Not only is it incompatible with God’s Word (the Bible) and the historic teaching of the church, but the Equality Act is also riddled with threats to religious liberty and the sanctity of human life. For these reasons, we must state that we adamantly oppose this proposed legislation."

+ + Take action against this anti-faith bill!

{{recipient.first_name_or_friend}}, today, there is still time to add your name to our "Stop the Anti-Faith Equality Act" petitions to Senate Majority Leader Mitch McConnell and the 12 GOP Senators LGBT activists are targeting on THURSDAY, before senators leave for their July 4 recess.

(We included the complete petition language at the end of this message.)

Thanks for taking action today!

P.S. In spite of strong opposition to the overreaching Equality Act by many LGBTQ leaders, pop superstar Taylor Swift is using her superstar status to advance this misguided piece of legislation. Her mega-platform is all part of a strategy to overwhelm this issue and force Congress to take action. If concerned citizens don't take an active stand in defense of our religious liberties and against the oppressive "Equality Act," we will lose this battle and lose our faith, our families and our nation.

I oppose the wrongly-named "Equality Act" -- a very dangerous bill that pushes a radical LGBT agenda while essentially criminalizing Christian beliefs. This bill would strip away religious liberties and put people of faith on the wrong side of the law. It also would force our churches and Christian businesses and schools to conform to the radical LGBT agenda. I urge you to oppose the so-called Equality Act.