Two GOP Senators to watch on the "Equality" Act 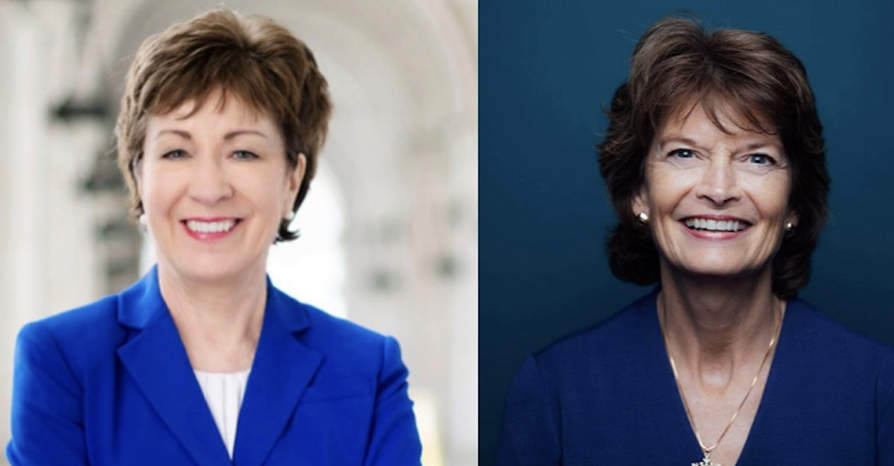 Senate Democrats need 10 Republicans to break ranks with their party for the so-called Equality Act (H.R.5) to become law. A "YES!" vote on this radical, anti-faith and pro-LGBTQ bill would green-light an extreme homosexual, transgender agenda at the expense of biological females, at-risk children, the unborn and people of faith.

Democrats may have two of the ten votes they need in Sen. Susan Collins (R-ME) and Sen. Lisa Murkowski (R-AK). Yesterday, both GOP lawmakers voted to confirm the first openly transgender person to serve in a federal post. Rachel Levine, formerly Richard before "transitioning" from male to female in 2011, will serve as Assistant Secretary for Health at the Department of Health and Human Services.

Does Collins and Murkowski supporting the confirmation of a transgender nominee mean they'll also vote in favor of the "Equality" Act? Millions of Americans are demanding exemptions for religious organizations, a level playing field for women's and girls' sports and other protections based on sex at birth versus chosen gender. But calls for those changes to H.R.5 have been ignored by Democrats.

The Equality Act may be the GREATEST THREAT to both families and people of faith we have ever faced, and radicals in Congress are trying to PUSH it through as quickly as possible! A vote in the Upper Chamber is IMMINENT! Senate Majority Leader Chuck Schumer (D-NY) has positioned the bill so he can call a vote on H.R.5 at ANY TIME!

That's why Grassfire is issuing this URGENT ALERT, calling on American patriots to take action NOW. If you're outraged by this anti-faith, anti-woman and anti-child legislation, go here to let your voice be heard sending your personalized "Stop The 'Equality' Act!" faxes to all 50 Republican Senators for just $30:

This controversial bill is a blatant attack against the rights of American women, girls and people of faith. It also could harm children by eliminating faith-based adoption and foster-care providers. The legislation does NOT exempt churches, religious organizations, Christian businesses or Christian schools and universities. In fact, it specifically forbids religious free-exercise claims as a defense against it.

The "Equality" Act also rewrites civil-rights law to include "sexual orientation and gender identity" as protected classes. The bill also would erase significant safety, privacy and equality rights for biological females, while defending abortion under the guise of "sex discrimination."

As America waits for the Senate to vote on the "Equality" Act, GOP Senators are expected to face intense pressure from radical Democrats, LGBTQ activists, the Unhinged Left, FAKE NEWS, the Hollywood "elite" and others. You can call on Sens. Collins, Murkowski and their fellow Republicans to stand firm and stay united to protect religious freedom and the rights of women and girls! Thanks, in advance, for taking action.

P.S. If you missed yesterday's "Equality" Act update, you can read it here. Keep reading to find out why National Review calls this dangerous bill "ideological tyranny." If you want to see this anti-faith, anti-woman and anti-child legislation defeated in the Upper Chamber, take action by clicking here or on the banner below to instantly send your personalized "Stop The 'Equality' Act!" faxes to Senators now: