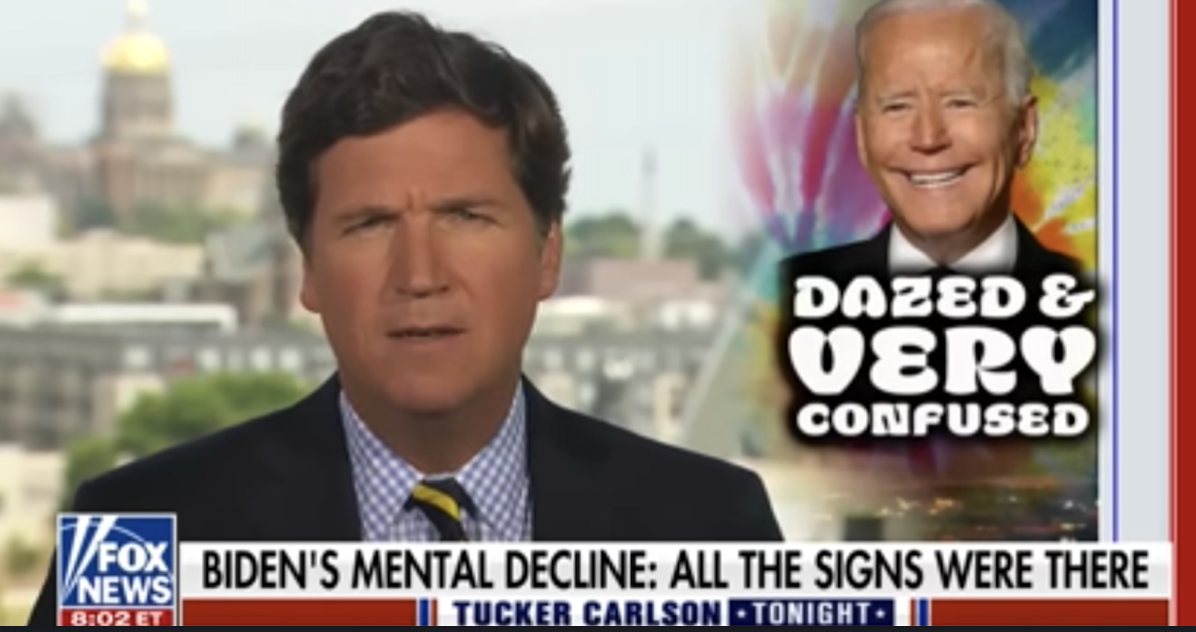 "The problem with Joe Biden is, he's cognitively unable to serve."

Those are words FOX News' Tucker Carlson used on Friday, when talking about the "mental decline" of America's 46th "Commander-in-Chief." During that "Tucker Carlson Tonight" broadcast, he insisted: "Everybody watching, everyone in the media -- that would include Barack Obama's former advisers -- is now in agreement that Joe Biden is senile and cannot govern the United States." Carlson also added:

"This is horrible for all of us. It reflects poorly not just on the Democratic Party or Biden himself, but on our country. ... It's absolutely awful. And again, there's no upside. So Joe Biden's senile. Everybody knows it. Do we win a prize now? No. We watch our country degrade." (Watch the alarming 13-minute segment here.)

Mr. Biden's "handlers" are trying harder and harder to hide the "Commander-in-Chief's" obvious mental decline. But the American people aren't fools. They can see and hear it. A recent Harvard CAPS-Harris poll found that 60% of those surveyed said Joe Biden is not "mentally fit" for the presidency. An even higher number (64%) think he's "too old" to be "Commander-in-Chief," while 71% don't want him to run in 2024.

If you think it's time for GOP lawmakers to pressure Joe Biden to end his failed "presidency," we're empowering you to take action now. Sign the "Joe Must Go!" national petition to tell Republican leaders to demand Mr. Biden's immediate resignation, removal or impeachment. Click here or on the banner below to make your voice heard by adding your name now:

The Biden presidency continues to be a train wreck of missteps, mistakes and failures. It's no wonder his regime has no answer to the real challenges facing our great nation when the "Commander-in-Chief" continues to be stumped by a TelePrompTer. Have Americans seen enough? Maybe that's why there are renewed calls for Joe Biden's resignation, impeachment or removal from office.

Tucker Carlson: This is horrible for all of us (FOX News via YouTube)