Trump SLAMS Fauci and insists virus questions "must be answered" 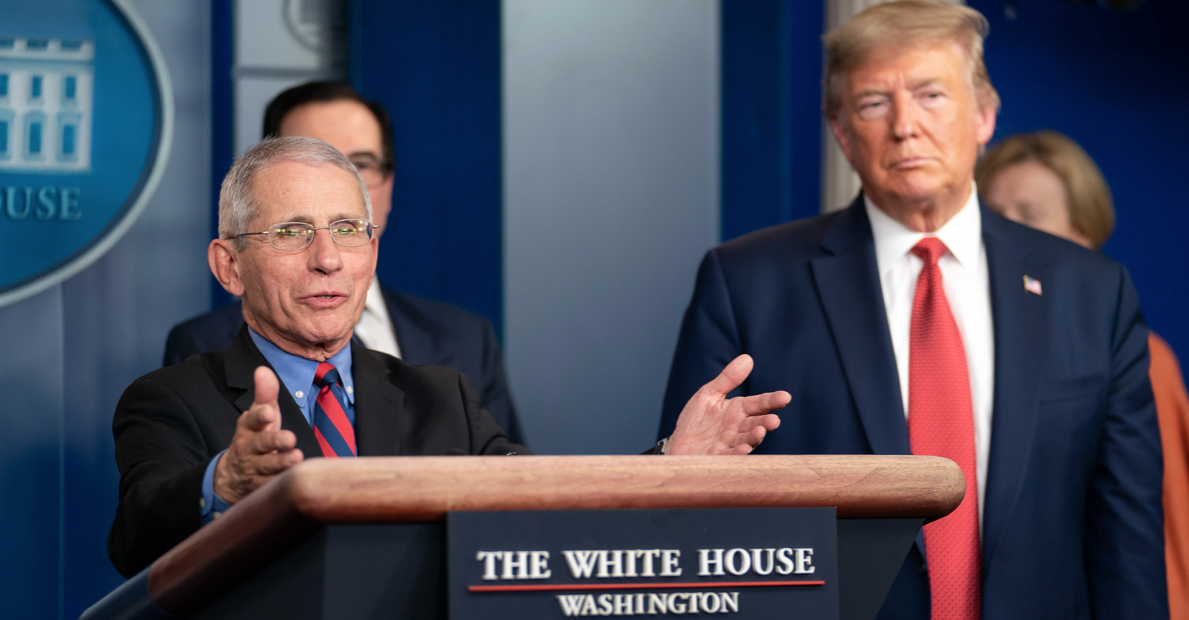 President Trump is slamming Dr. Anthony Fauci after this week's release of more than 3,200 emails from the inbox of the director for the National Institute of Allergy and Infectious Diseases (NIAID). In an email of his own on Thursday, America's 45th president wrote:

There are a lot of questions that must be answered by Dr. Fauci. The funding of Wuhan by the U.S. was foolishly started by the Obama Administration in 2014 but ended under the Trump Administration. When I heard about it, I said "no way." What did Dr. Fauci know about "gain of function" research, and when did he know it?

Now everyone, even the so-called "enemy," are beginning to say that President Trump was right about the China Virus coming from the Wuhan Lab. The correspondence between Dr. Fauci and China speaks too loudly for anyone to ignore.

When pressed by Sen. Rand Paul (R-KY) at a Senate hearing on May 11, Fauci insisted that the National Institutes of Health (NIH) -- the federal agency in charge of his NIAID -- had NOT financed any research at the Chinese lab. "Senator Paul, with all due respect, you are entirely and completely incorrect," he claimed. "The NIH has not ever and does not now fund gain-of-function research in the Wuhan Institute."

The next day, Paul told FOX News that Fauci's statements were "verifiably false." This week, Kentucky's junior senator continued his criticism of the NIAID chief, saying in another FOX News interview: "The emails paint a disturbing picture -- a disturbing picture of Dr. Fauci, from the very beginning, worrying that he had been funding gain-of-function research. And he knows it to this day but hasn't admitted it."

ATTENTION GRASSFIRE VIPS: GO HERE TO SEND YOUR "FIRE FAUCI!" FAXES AT AN 80% DISCOUNT!
(Not a VIP? Go here to send this fax at 80% off.)
(Having trouble accessing your benefits? Go here.)

If you can, please consider going the "extra mile" and choose LEVEL TWO faxes to also reach the ENTIRE House Freedom Caucus for only $45. Our LEVEL THREE faxes will expand your impact to include EVERY Republican in the United States Senate. To encourage MAXIMUM PARTICIPATION, we're offering our team members discounts of up to $40 on our "Fire Fauci!" FaxFire. Go here.

Again, you can demand Republicans in the House and Senate take immediate action to have Dr. Fauci fired or -- at the very least -- forced to resign. Click here to fax GOP lawmakers now. To send your own faxes, click here for a list of "Fire Fauci!" targets and their contact information. Thanks, in advance, for taking action.

P.S. The trove of emails released this week indicate the Dr. Anthony Fauci, apparently, lied about "gain of function" research at a Chinese lab that may have unleashed COVID-19 on the world. Click here or on the banner below to instantly send your "Fire Fauci!" faxes to GOP lawmakers in the House and Senate now:

JABBING TOP DOC Rand Paul says Fauci lied to him over US-funded research that was being carried out in Wuhan lab (The U.S. Sun)