Now, Sign The National Petition: Stand With President Trump To "Stop The Steal!"

Grassfire is rallying citizens to take a stand against Democrat-led efforts to steal the 2020 election! The mounting evidence of widespread voter fraud includes, illegitimate Biden ballots being counted, legitimate Trump ballots being thrown out, and tens of thousands of mystery ballots (all for Biden) showing up in the middle of the night in key battleground states. 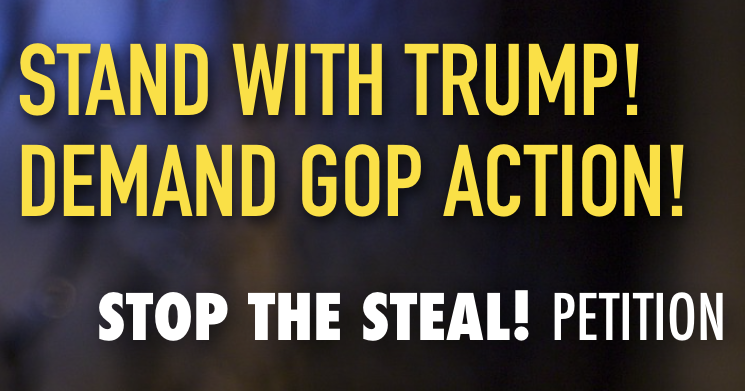 This attack against President Trump and the integrity of a United States election is unprecedented and must be stopped! Sign the national petition to "STOP THE STEAL!" and demand GOP lawmakers take immediate, decisive action to protect the integrity and legitimacy of this and future elections.

Complete the form below to add your name now, and then share this petition with pro-Trump friends and family members. Urge them to sign, too. When we reach 20,000 signers, Grassfire representatives will deliver your petition to GOP leaders in the House and Senate on Capitol Hill.

I'm taking a stand to "Stop The Steal!" I call on GOP lawmakers across America to take IMMEDIATE action against the mounting evidence of voter fraud, ballot harvesting and ballot stealing. EVERY patriotic Republican MUST stand with President Trump to protect the integrity and legitimacy of the 2020 election.