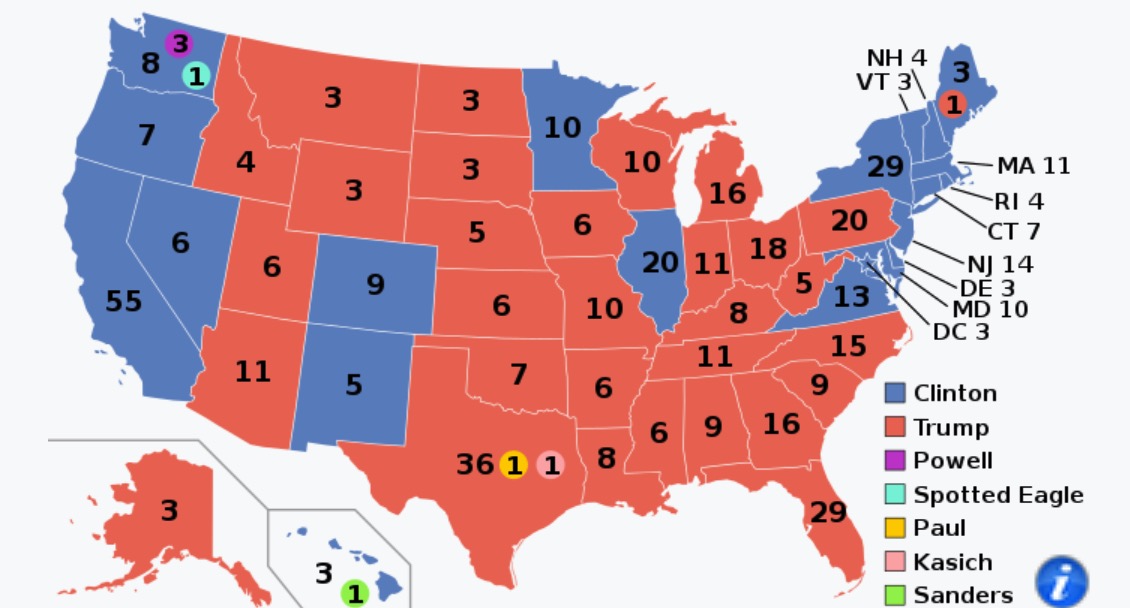 Trump's map to re-election starts with the 306 electors he won in 2016 (pictured here).

Most pundits are looking at 12 battleground states. Some are including Texas as a 13th battleground. If Trump loses Texas, the election is over and a Biden landslide will likely happen. That's because Trump would have to win all his 2016 states PLUS at least one Hillary state just to get back to 270.

Of these battlegrounds, here are the states Trump won in 2016, with notation of # of electoral votes, recent polling Trafalgar Group unless noted (about Trafalgar's methodology), and time race was called in 2016.

We think IA and OH are in Trump's column because of recent polling and the fact that the liberal media isn't talking much about either state anymore. So that leaves 7 of the 2016 Trump swing states to defend.

It's hard to make a path to 270 if Trump loses Florida's 29 electoral votes because he would have to win EVERY other state he won in 2016 (assuming he doesn't pick up any Hillary states). But if he wins Florida...

Building a map with Florida...

With a Florida victory, Trump can lose ANY TWO of the remaining and still make 270:

Nate Silver and the entire Left Punditocracy are hinging the entire election (for both candidates) on PA, perhaps because they know PA will not be "called" on Election night. Yes, both candidates have a much more difficult time winning without PA. But Trump can lose PA and one other of these six AND STILL WIN RE-ELECTION -- if he holds all the rest of the 2016 map.

Clearly, the Trump team does not want this election to be decided by mail fraud. That's why Trump has been campaigning hard in some Hillary 2016 states. Wins in NV and MN could make up for losses in MI, NC, or WI and make the path much easier even if he loses PA or if PA is contested.

Here's what to watch for as election night unfolds. With all the early voting, each state has different rules. Some count the early votes prior to Election Day and then release the results right as polls close (FL and NC notably). Others don't even start counting early votes until election day.

One of the biggest "Monday Morning" questions of the election will be what impact did the coronavirus issue have? If Biden wins then the Feardemic wins and we are in trouble. Specifically, the battleground states to watch are NC, PA and MI -- three of the stronger lockdown states with Democrat governors. If those three states vote Trump, we can consider itr a repudiation of the Democrat governor-led shutdown. If a bigger "red wave" washes over VA and other hard lockdown states, Trump will have an even stronger mandate to KEEP AMERICA OPEN AGAIN.