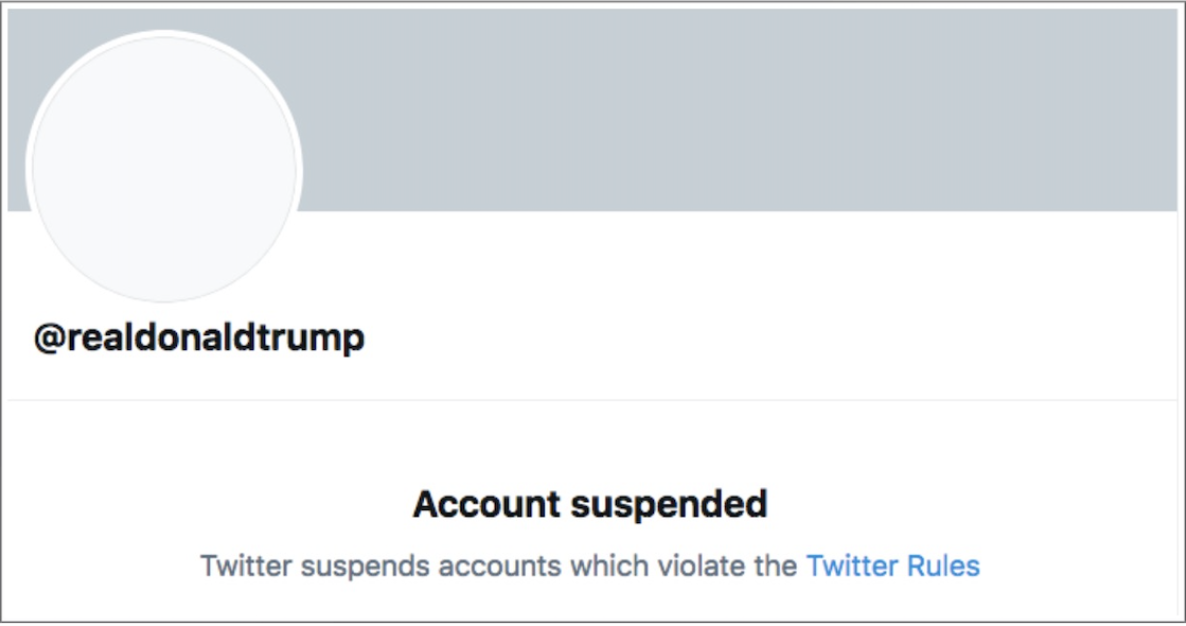 The Big Tech censorship we warned you about yesterday got worse overnight. Twitter has BANNED President Trump from its social-media platform -- PERMANENTLY! The sitting president of the United States of America has been "canceled" by Silicon Valley Overlords and prevented from communicating with We the People. It's outrageous!

What's worse is that radical Democrats and the Unhinged Left are applauding the action, as if there's no chance of it ever happening to them. (Be careful what you wish for!) One Democrat representative from New York ridiculously compared silencing the President to the capture of Saddam Hussein.

But Twitter isn't the only social-media company that took egregious, facist-style action yesterday. Facebook banned a conservative group with more than half a million members! According to a press release, the Walk Away Foundation lost "hundreds of thousands of videos from former Democrats who have abandoned their former party. At the same time Facebook also deplatformed a dozen Walk Away Foundation staff members and dozens of volunteers."

An online article posted this week by ABC News called for "cleansing the movement [Trump] commands, or getting rid of what he represents." If the idea of "cleansing" people brings to your mind the same disturbing historic imagery that it did for us, FAKE NEWS media are the ones who need to tone down their inflammatory rhetoric, not the President.

This weekend, Grassfire is looking for at least 100 friends to step forward and support our grassroots efforts as we start 2021. We need our team members' help to fight back against Big Tech censorship and FAKE NEWS disinformation, especially as a Biden-Harris administration looms dark on the horizon. The silencing of conservatives we've seen just this week -- including the President of the United States -- is likely to increase exponentially after January 20.

If you believe in the mission and work of Grassfire -- REPORT TRUTH that empowers you to TAKE ACTION -- please, click here or on the banner below to make a contribution of $30, $50, $75, $100 or more so we can reach millions in the year ahead:

As we shared yesterday, conservatives need to develop their own "information superhighway of the 21st century," "powerful delivery channels" and an "information ecosystem that rivals what liberals have." The ONLY way Grassfire can continue building all of that is with your help. Please see our previous message below, or click here now to help us fight back against Big Tech and FAKE NEWS in 2021. Thanks, in advance, for your generous support.

P.S. Again, if you missed yesterday's email about where the GOP failed and how Democrats "won" the 2020 election, please go here. Or click here to help Grassfire now: