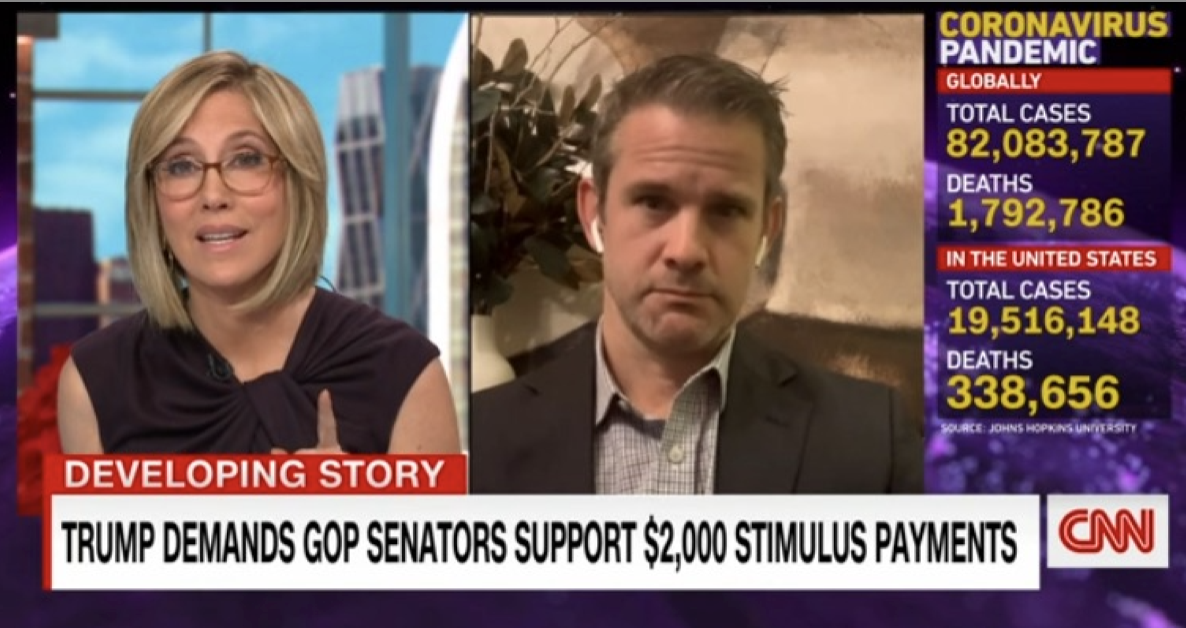 We have more to tell you about yesterday's outrageous comments by RINO Representative Adam Kinzinger of Illinois. During his interview with FAKE NEWS CNN, not only did he falsely claim that the President's "base is starting to turn" against him, he also said this about Trump supporters:

"The people that are... giving President Trump's campaign money for this recount because they believe him, and it's just a scam.... They are convinced, because the President's telling them this, that they can win, and they can't. And, I mean, the scam in Congress with January 6th... I think we have to call it out, finally, because if we don't, people are just gonna believe it."

Thanks, Congressman. Just so we're clear, you're saying that RINOs (like you), the GOP Establishment, the Deep State, the D.C. Swamp, radical Democrats, the Unhinged Left, FAKE NEWS and the Hollywood "elite" don't think Trump can win? You insist he lost fair and square? But what if he didn't?

Massive and widespread evidence suggests election law was blatantly and unconstitutionally violated. Proof of voter fraud exists too, as tens of thousands of illegal ballots from dead, unregistered, underage and other people have been identified. But almost all of it is being ignored by legislatures and courts at state and federal levels.

+ + American Patriots Have One Week To "Stop The Steal!"

Over the past two months, Grassfire has empowered tens of thousands of our team members to make their voices heard to "Stop The Steal!" Your anger and/or concern over attempts to hijack the 2020 vote is NOT "just a scam." America is facing a constitutional crisis on January 6. That gives "We, the People" only one more week to fight for President Trump!

This morning, we added Rep. Kinzinger to the LEVEL ONE targets for our "Stop The Steal!" FaxFire -- at no additional cost. You can let this House RINO know EXACTLY where you stand. Instantly reach inside his Capitol Hill office to tell him that President Trump's "base" still supports their Commander-in-Chief.

Click here or on the banner below now to fax your personalized message to Rep. Kinzinger, all 53 GOP Senators, SEVEN governors in key battleground states and 16 elected officials in Georgia, Pennsylvania, Michigan and Wisconsin -- for just $30:

Again, make your voice heard NOW by instantly faxing Kinzinger and demanding he help "Stop The Steal!" Urge him to take immediate action with fellow Republicans to prevent radical Democrats and the Unhinged Left from hijacking the 2020 election! Click here to fax now. Thanks, in advance, for standing with President Trump today.

P.S. If you missed this morning's message featuring Kinzinger's outrageous "undermining of the democracy" comments, we've included it below. To take immediate action and demand Republicans "Stop The Steal!", click here or on the banner below now:

In an interview on FAKE NEWS CNN yesterday, turncoat GOP Representative Adam Kinzinger (R-IL) made the outrageous claim that President Trump's "base is starting to turn." Kinzinger also said, "It's an election. It's just a competition of ideas. But after an election, it has turned into an undermining of the democracy."

America's Commander-in-Chief and millions of his supporters believe the election was stolen, Rep. Kinzinger. With all due respect, wake up! You should be more concerned about democracy being undermined DURING the election, not after it.

Calling for the counting of every LEGAL vote and the rejection of every ILLEGAL one is the hallmark of a democratic election. It's not "an undermining of the democracy." The evidence of massive, widespread voter fraud and blatant, unconstitutional violations of election law continue to be investigated and litigated in several states. Instead of making outrageous, baseless claims on FAKE NEWS, you should be fighting with the President and your constituents to "Stop The Steal!"

Since Election Day, Grassfire has seen our team members rally to Mr. Trump's defense in a BIG way. Our polls consistently show more than 90% support for our Commander-in-Chief. The evidence we have clearly indicates that his base is NOT "starting to turn" against efforts to expose the "rigged" election.

If you want to let Rep. Kinzinger know EXACTLY how you feel, we added him to our "Stop The Steal!" FaxFire this morning. Use this unique tool to tell him that President Trump's "base" still supports their Commander-in-Chief. Make your voice heard NOW by instantly faxing Kinzinger and demanding he take immediate action with fellow Republicans to stop radical Democrats and the Unhinged Left from hijacking the 2020 election!

Click here or on the banner below now to fax your personalized message to Kinzinger, all 53 GOP Senators, SEVEN governors in key battleground states and 16 elected officials in Georgia, Pennsylvania, Michigan and Wisconsin -- for just $30:

In addition to targeting Kinzinger directly, your LEVEL ONE "Stop The Steal!" faxes also reach EVERY Republican Senator, including Senate Majority "Leader" Mitch McConnell (R-KY) — the chief architect of the GOP's failed "Play Fight & Surrender" strategy in Congress. His "go along to get along" approach with Democrats over the past several years has brought disastrous consequences, including ObamaCare, ObamaGate, out-of-control spending and the "rigged" election!

If so, click here to immediately send your personalized, pro-Trump, "Stop the Steal!" messages to Rep. Kinzinger and all 53 GOP Senators for just $30 -- less than $.40 each. To send your own faxes, click here for our complete list of targets and their contact info. Thanks, in advance, for supporting President Trump today.

P.S. The COVID-inspired, vote-by-mail scams that Democrats insisted on months ago have brought America to where it is now -- on the brink of a stolen election! Liberty-loving Americans can't let radical Democrats and the Unhinged Left get away with robbing Donald Trump of his second term! The Republican-controlled Senate, GOP leaders in the House, the 16 state legislators, and seven governors targeted in our "Stop The Steal!" MUST take immediate action! Click here or on the banner below now to fax your personalized message to 77 lawmakers for just $30 or 116 legislators for only $50: