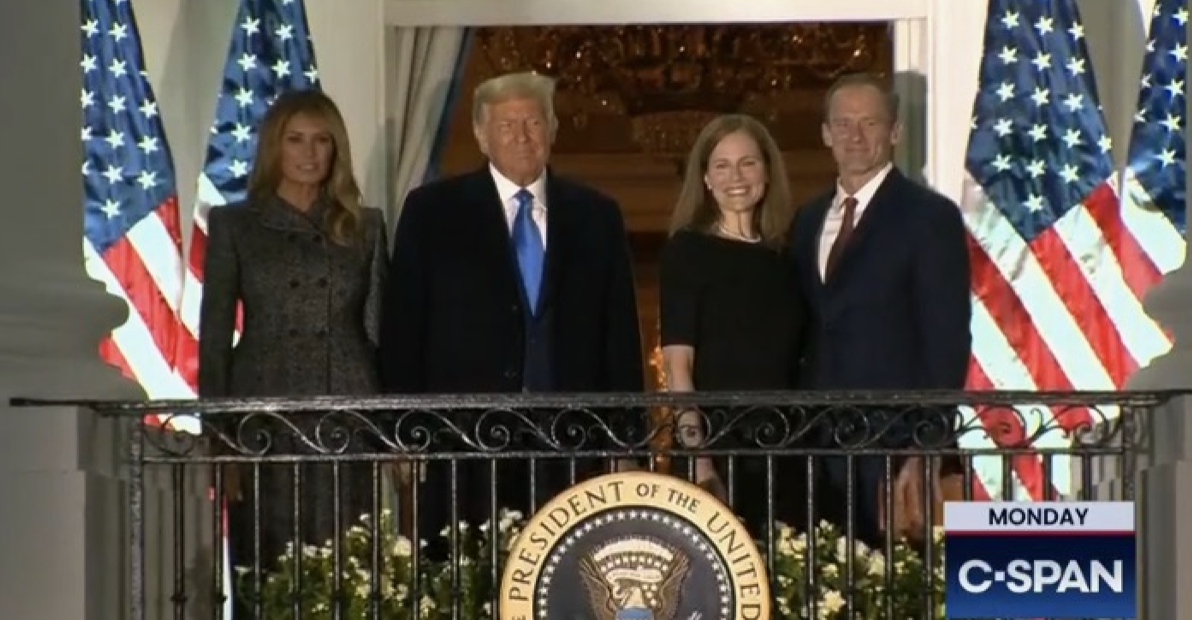 By a vote of 52-48, the United States Senate has confirmed Judge Amy Coney Barrett as an associate justice on the Supreme Court. Justice Clarence Thomas conducted her swearing-in ceremony at the White House with President Trump in attendance, shortly after last night's vote. Barrett's husband Jesse stood at her side, holding the Bible on which she promised to "support and defend the Constitution of the United States against all enemies, foreign and domestic."

JUSTICE Barrett is the third constitutional originalist nominated by Donald Trump and confirmed by the Republican-controlled Senate during the President's first term in office. At 48 years old, she's the youngest of the nine sitting justices. Barrett is also the fifth female Supreme Court justice in history and the first to serve while having school-aged children.

Because the process to seat Barrett took exactly one month, Democrats are crying foul. They claim her nomination and installation on the High Court was rushed, unconstitutional and illegitimate. Senate Minority Leader Chuck Schumer (D-NY) said that yesterday will "go down as one of the darkest days in the 231-year history of the United States Senate." He added that "generations yet unborn will suffer the consequences," which is ironic because Barrett, a devoted Catholic, could actually protect the unborn for generations if the High Court overturns Roe v. Wade during her tenure.

The criticism from Democrats and the FAKE NEWS media fell on mostly deaf ears in the GOP. All but one Republican, Susan Collins of Maine, voted to confirm President Trump's highly qualified nominee. Just before the vote, Senate Majority Leader Mitch McConnell (R-KY) blasted the Democrats' partisan attacks on soon-to-be Justice Barrett and the process to seat her on the Supreme Court.

"Our colleagues cannot point to a single Senate rule that’s been broken," McConnell insisted. "The process comports entirely with the constitution. ... Our democratic colleagues keep repeating the word 'illegitimate' as if repetition would make it true. We're a constitutional republic. Legitimacy does not flow from their feelings."

In 2016, Candidate Donald Trump said during a campaign speech: "We're gonna win so much; you may even get tired of winning. And you'll say, 'Please, please, it's too much winning! We can't take it anymore!'"

America's Commander-in-Chief has appointed three non-activist Supreme Court justices in his first term. That's winning! If you're NOT tired of winning and want it to continue, your support for President Trump is crucial right now.

THE FATE OF OUR NATION WILL BE DECIDED IN EXACTLY ONE WEEK! If TEAM BIDEN prevails, radical Marxists will seek to control the government, FAKE NEWS and social media. Their goal is to acquire unrestrained power over our lives.

In the final week before November 3, Grassfire is launching an "Election Blitz." Later today, our staff will unveil a special initiative to reach an additional ONE MILLION liberty-loving citizens -- especially in ten, key battleground states -- with the TRUTH that will break through the radical Left's lies and deceptions.

Because we have such a large "footprint" in email, web and social media, Grassfire is in a unique position to EXPAND that footprint. But we need the resources to make it happen.

Our mission is to REPORT TRUTH so you can TAKE ACTION on the key issues of our day. We've produced more content in the past several months than at any time in our history. Our team has been ON TOP of all the key issues, with at least daily updates and action items. Plus, we've been creating almost-daily VIDEO BRIEFINGS for our VIPs, as well a daily digest report with dozens of news links the liberal media is ignoring. (Go here to see today's VIP Video Briefing as a sample.)

+ + Grassfire was CREATED for this fight!

Grassfire has one of the largest email networks in the entire conservative movement, and this is especially important right now because EMAIL IS ONE OF THE FEW AVENUES OF ONLINE COMMUNICATION the Silicon Valley Overlords cannot easily censor and silence! Grassfire's influence and impact has never been more vital. In all, we've been getting the message out to about a MILLION people every day.

YET, WE MUST DO MORE -- especially during the final countdown to Election Day on November 3!

We run a remarkably lean "ship" here. Our team is MAXED OUT right now in reporting the truth through our existing channels. To do more before Election Day, WE NEED HELP RIGHT NOW.

Again, we want to get the TRUTH out to ONE MILLION additional conservative citizens before Election Day. But we need support OVER AND ABOVE our normal operating budget to do that.

If just 100 Grassfire friends could step forward TODAY, it could make a big difference in sharing what's really at stake in this election: Life, Liberty and Limited Government. Can we count on your help?

If you believe in the mission and work of Grassfire, we're asking you to prayerfully consider helping us reach an additional ONE MILLION PATRIOTS with the TRUTH before November 3. Will you contribute $30, $50, $75, $100 or more today to help Grassfire fight back? If so, please go here:

+ + Our Gifts To You: Grassfire's MOST IMPORTANT Trump Resource And VIP Access!

If you can help Grassfire fight back with a contribution of $30 or more right now, we want you to have two critical resources... 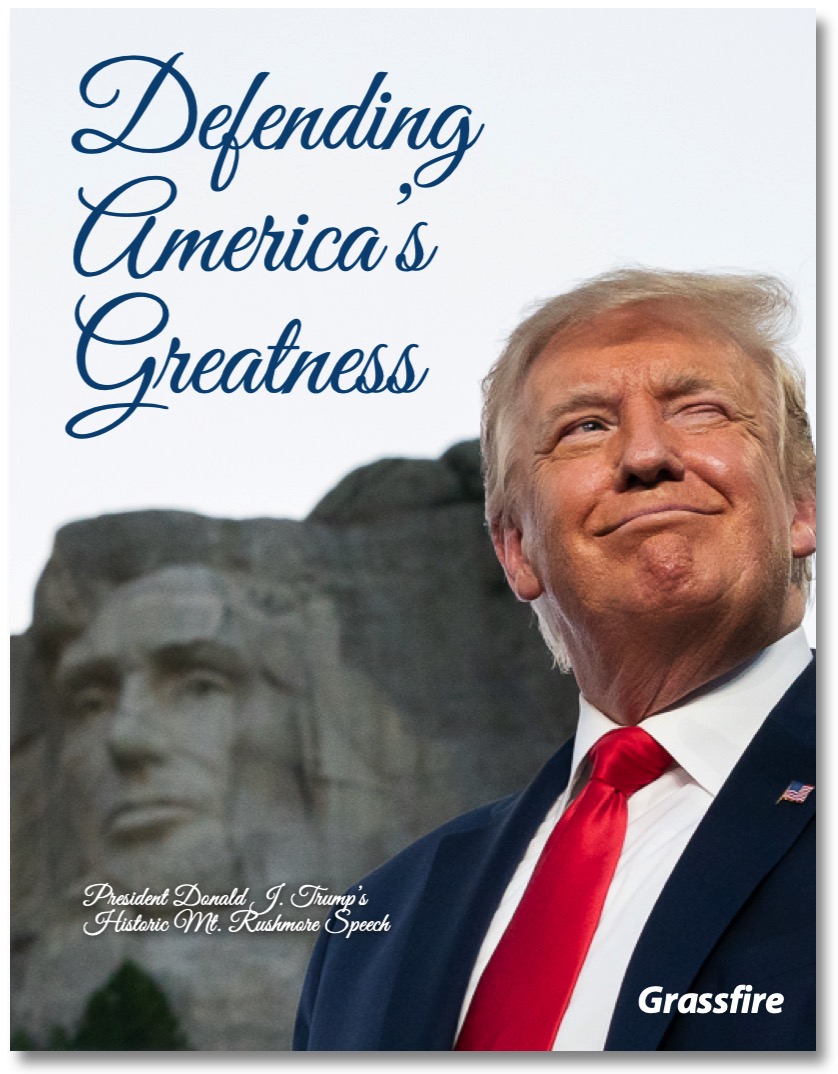 First, we have just a few hundred copies of our special COLLECTOR'S PUBLICATION called "Defending America's Greatness" that features President Trump's watershed speech at Mt. Rushmore earlier this year. That speech encapsulates precisely what this election is about: Will we DEFEND AMERICA, or will we DESTROY AMERICA? Grassfire will rush you a copy of "Defending America's Greatness" if you can help us TODAY.

Second, if you can help with $30 or more, we'll also grant you VIP access from now through the end of the year. Will you stand shoulder-to-shoulder with Grassfire today? Go here to HELP GRASSFIRE FIGHT and receive these two critical resources:

We believe TRUTH will prevail, but Grassfire must get the truth into the hands of as many people as possible, especially in key, battleground states THIS WEEK. We're in a unique position to do that BECAUSE OF OUR MASSIVE DIGITAL FOOTPRINT, which is largely beyond the control of Big Tech, Silicon Valley elites.

But to make this happen, Grassfire needs your help TODAY. Thanks, in advance, for your support.

P.S. Again, we need about 100 friends to go the "extra mile" with Grassfire today. You can help provide the resources beyond our normal budget so we can expand our efforts in this fight. Few organizations in the country can inform and equip hundreds of thousands of citizens like Grassfire can. But we need your support to continue fighting even past Election Day. If you can support us with a contribution of $30 or more today, we'll send you "Defending America's Greatness" and grant you VIP status through the end of the year. Will you contribute $30, $50, $75, $100 or more to help us fight back? If so, please go here now: