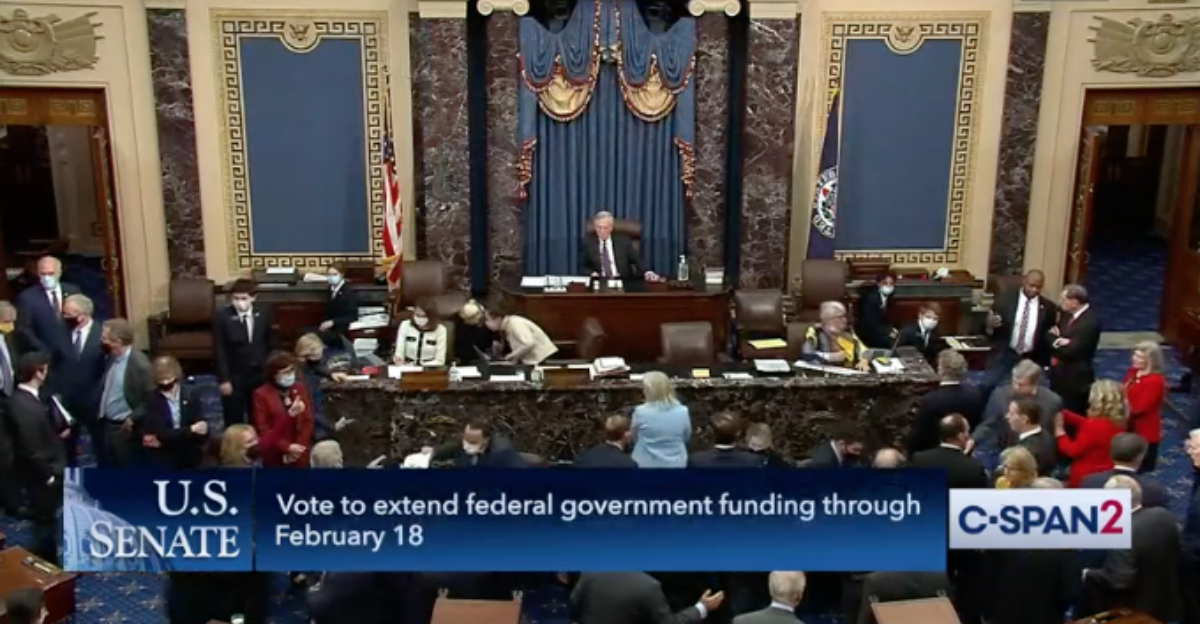 Was it another game of "Play-Fight and Surrender"? Or did Republican Senators set the stage for a victory next week with the help of "moderate" Democrat Sen. Joe Manchin of West Virginia? "America First" patriots will find out in a few days.

In what amounted to a "surprise" vote on a continuing resolution to avoid shutting down the federal government, 19 Senate "Republicans" voted (after 8:00 p.m. ET last night) to fund Joe Biden's and the Democrats' tyranny and failure. Those RINOs chose to finance the regime's vaccine mandates, disastrous economic policies, foreign-policy blunders (i.e. Afghanistan) and more.

A group of "conservative" lawmakers, led by Sen. Mike Lee (UT), tried to make a stand by offering an amendment (#4868) in the Upper Chamber to "prohibit use of federal funds for implementing or enforcing the Biden administration's vaccination mandates." But it ended up being nothing more than a "show vote." Two Republican Senators were absent last night, so there was no way the GOP amendment would pass in the 50-50 Senate. According to POLITICO Playbook, the conservatives caved:

The far-right started out demanding that Congress effectively scuttle the mandates, then reduced their ask to a mere vote they knew would fail, ensuring smooth passage of a continuing resolution a full 30 hours before the shutdown deadline.

But all is NOT lost in the fight against Joe Biden's draconian and unconstitutional vaccine mandates. As the late New York Yankee great Yogi Berra famously said, "It ain't over 'til it's over." Late yesterday, Sen. Manchin indicated that the battle against COVID tyranny will continue next week. He posted the following statement on Twitter, shortly after last night's vote:

In the midst of the COVID-19 pandemic and as the new Omicron variant emerges, I will not vote to shut down the government for purely political reasons. There is too much at stake for the American people. But let me be clear, I do not support any government vaccine mandate on private businesses. That's why I have cosponsored and I strongly support a bill to overturn the federal government vaccine mandate for private businesses. I have long said we should incentivize, not penalize, private employers whose responsibility it is to protect their employees from COVID-19.

The fight to stop the Biden regime's COVID tyranny is NOT over. But the next few days will be crucial to ending the radical, unhinged Left's draconian and unconstitutional vaccine mandates.

Multiple federal courts have paused Joe Biden's forced vaccination of America. But his failed, tyrannical administration continues pushing large employers to ignore the court rulings. It's outrageous! That's why passing a law against government vaccine mandates is so critical.

Millions of Americans should NOT have to chose between taking the jab and losing their job. So, Grassfire is empowering team members to take immediate action against COVID tyranny.

Urge Republican Senate Leadership and Sen. Joe Manchin (D-WV) to stop the Biden regime's vaccine mandate. Fight Joe Biden's and the Democrats' COVID tyranny! Click here or on the banner below now to sign the "No Jab Mandate!" national petition:

Again, you CAN fight back against the Biden regime's COVID tyranny. The radical, unhinged Left is determined to take our great nation down the "rabbit hole" of using the FEARdemic to, once again, strip you of your God-given, constitutional rights. You don't have to let them get away with it!

If you're outraged by these attacks on your freedom, take immediate action! If you REJECT the radical Democrats' efforts to "reset" America into a "woke," socialist, totalitarian state, Grassfire is empowering you to do something about it! Make your voice heard in the battle against COVID tyranny by telling Republican Senators and Sen. Manchin to stand strong and stay united.

Take immediate action by clicking here to instantly sign the "No Jab Mandate!" national petition. Tell Senators to say "NO!" to Joe Biden's unconstitutional COVID tyranny! With another Senate vote expected next week, Grassfire will mobilize our representatives on Monday to deliver "No Jab Mandate!" petitions to Republican Senate leadership as soon as possible.

Time is short! Go here to add your name now. Thank you, in advance, for taking action today.

P.S. Please note that Grassfire is not against people choosing to receive the COVID vaccine, especially the elderly and those most at risk. But the Biden regime and the radical, unhinged Left have launched the FORCED VACCINATION of America. If you do NOT think the "jab" should be mandated or forced on Americans for work, school, military service or any other reason, go here to sign the national petition now: