Gingrich on infrastructure bill: "It's gonna be a disaster" 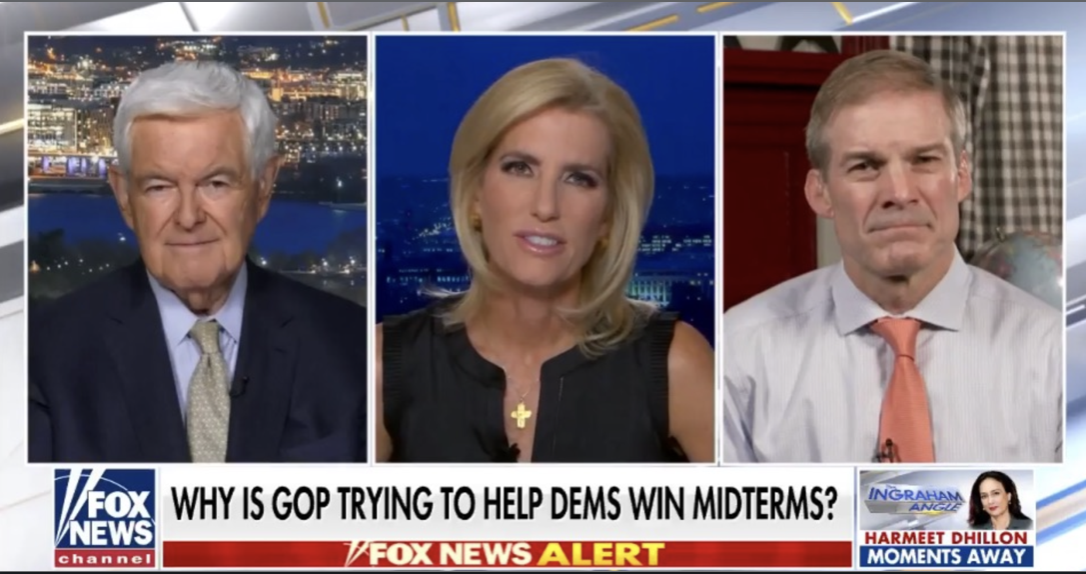 Earlier today, we told you about former House Speaker Newt Gingrich blasting GOP Senators who support the fake, $1.2-trillion "infrastructure" bill. (See our previous SPENDING SCAM update below.) On FOX News' "The Ingraham Angle" last night, the Georgia Republican didn't hold back, criticizing many of his "good friends" in the Senate:

"I don't mind if they can't play chess. But if they can't play tic-tac-toe, there's something really, profoundly wrong. ... This is something they should bail on. It was a mistake. It will be dramatically worse than they think. And the 2,700 pages will be followed by 50,000 pages of regulations. And there's more than enough reason for those 17 Senators to decide that they got suckered and that the time has come to kill (the bill), not to move it forward."

The urgent push to pass this SPENDING SCAM began weeks ago, when Schumer (D-NY) started calling for votes before the legislation was even written. He managed to convince 17 GOP Senators to cave last week and vote to move the bill forward. (One Republican missed the vote but said he would have stood with the other RINOs and Democrats by voting "Yes.")

The 2,702-page spending monstrosity wasn't even available to Senators until Sunday night. Yet, Schumer wants the legislation passed before the Upper Chamber's August recess, which is supposed to start on Friday. With the Senate voting on hundreds of amendments this week, now is the time to make your voice heard!

If you want GOP Senators to pull America back from the brink of socialism, take action now using Grassfire's unique FaxFire system. Click here or on the banner below to rush your "Stop The Spending Scam!" faxes to 50 Senate Republicans and two moderate Democrats for just $30. Or reach ALL 100 U.S. Senators for only $50:

Appearing with Gingrich on FOX News last night, Rep. Jim Jordan (R-OH) said "only 10%" of the $1.2-trillion bill "is devoted to actual infrastructure" (roads, bridges, ports, etc.). He insisted the rest of the funds will be used for "a bunch of left-wing spending."

Again, amendment votes are happening NOW! Schumer needs 60 votes for final passage of the $1.2-trillion SPENDING SCAM. That means at least 10 Republicans will have to vote "Yes" for the bill to become law. Demand they stand firm and stay united to save America from socialism.

If you want to tell those 18 RINOs who caved last week -- and the 32 GOP Senators who didn't -- to "Stop The Spending Scam!", click here to fax them now. Thanks, in advance, for taking action tonight.

P.S. Again, if you missed this morning's SPENDING SCAM update, please see below. Gingrich and Jordan had a lot more to say about just how bad the fake, $1.2-trillion "infrastructure" bill really is! To take immediate action, go here to fax Senators now and demand they "Stop The Spending Scam!":

Establishment Republicans and RINOs in the U.S. Senate face growing criticism from the Right on the fake, $1.2-trillion, "infrastructure" bill. On FOX News last night, former House Speaker Newt Gingrich (R-GA) accused GOP Senators of "having no idea what's in the bill" and "selling out to the Left" by supporting the 2,702-page legislation.

"It's gonna be a disaster," Gingrich insisted. "They got suckered on this. It's the wrong thing to do. They ought to re-think it. There will be more than enough reason to vote against this bill."

Rep. Jim Jordan (R-OH), who appeared on "The Ingraham Angle" along with Gingrich, said "only 10%" of the $1.2-trillion bill will be spent on actual infrastructure: "It's a bunch of left-wing spending. It's part of what I call 'The Democrats' Crazy Economic Plan.'"

"For all of you who are working, they're getting ready to raise your taxes," Jordan added. "We know this is bad. What these Republicans [who negotiated the bill] were thinking, I don't know. Because it's 'Step One' of a bigger spending bill that's coming later."

Gingrich followed up by pointing out: "This is the kind of behavior, which led to the rise of the T.E.A. Party from people who were furious at the failure of Washington leadership. It's the kind of thing, frankly, which led to 63% disapproval of Republican leaders in the Congress just before Donald Trump ran for president."

Senators are voting THIS WEEK on hundreds of amendments to the 2,702-page, $1.2-trillion SPENDING SCAM, hoping to pass the bill this week. That gives grassroots Americans committed to life, liberty and limited government, just a few days to make their voices heard. If you agree with Speaker Gingrich and Rep. Jordan, you can take action now!

Click here or on the banner below to take action now. For just $30, fax ALL 50 Republican Senators, as well as Sens. Kyrsten Sinema (D-AZ) and Joe Manchin (D-WV). Both moderate Democrats have indicated they will NOT support Phase Two of the SPENDING SCAM. Reach every United States Senator (100 faxes) for only $50:

Democrats are tying this "smaller" legislation to a much larger $3.5-trillion, tax-and-spend package they want to ram through Congress by September. Schumer and House Speaker Nancy Pelosi (D-CA) want that bill passed through "budget reconciliation," which means it could become law through a simple majority vote and with ZERO REPUBLICAN SUPPORT!

The radical, unhinged Left is trying to use taxpayer money to fund and build a super highway to socialism. Yet, 18 RINOs sided with Senate Majority Leader Chuck Schumer (D-NY) last week to move forward on the fake "infrastructure" bill that, again, only spends about 10% on actual infrastructure.

Far-left lawmakers are on record promoting paid leave, childcare, "caregiving," police accountability, election "reform," affordable housing, fighting "climate change" and packing the Supreme Court as "infrastructure." To radical Democrats, "infrastructure" is whatever they say it is.

Don't let the Senate "pour the cement" for a socialist foundation in America. Republican Senators need to hear from grassroots conservatives, like you, who demand they "Stop The Spending Scam!" Click here to fax them now. Thanks, in advance, for taking action.

P.S. You can take action to prevent Minority "Leader" Mitch McConnell (R-KY) and his crash of RINOs from pushing America one giant step toward socialism THIS WEEK. Click here or on the banner below to fax Senators and tell them to "Stop The Spending Scam!" now: