President Trump is still fighting -- just like he promised! 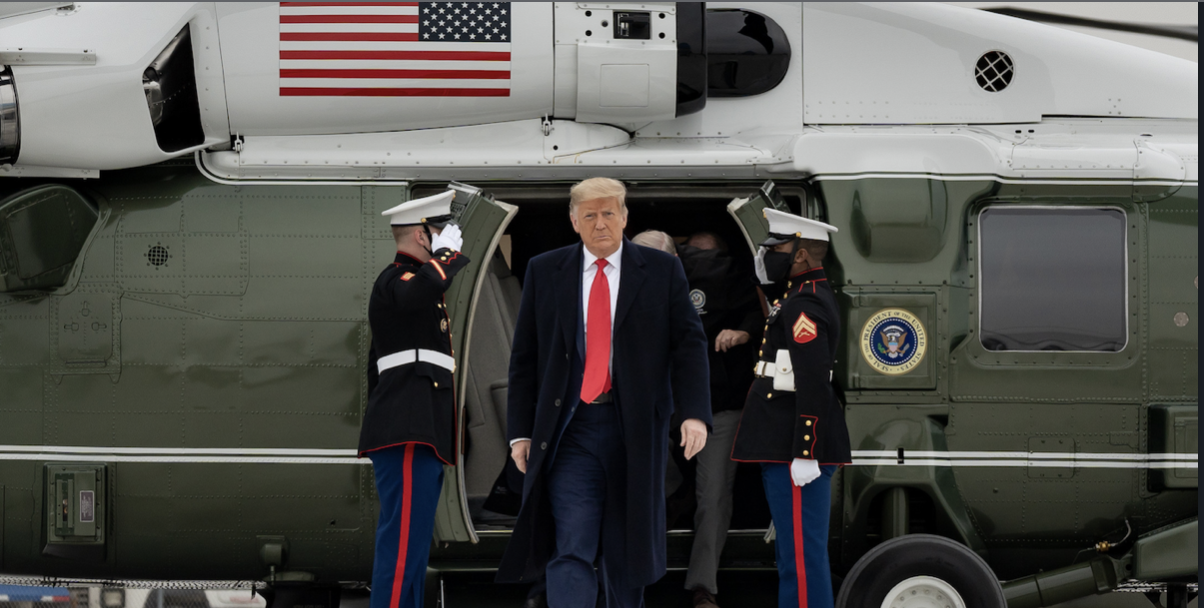 President Trump isn't going anywhere, and he hasn't stopped fighting to keep "American First." Last week, our 45th Commander-in-Chief announced that he'll hold "Make America Great Again" rallies in four states this summer: Florida, Ohio, Georgia and North Carolina. Also, through the "Office of the Former President" and his website, Mr. Trump continues to communicate and connect with his supporters.

To commemorate the Trump presidency and the impending return of MAGA rallies, Grassfire is, once again, offering team members our "Never Stop Fighting!" print.

The powerful photo shows President Trump exiting "Marine One" after touching down in Texas during one of his final acts as Commander-in-Chief. He traveled to the Lone Star State to inspect a section of the border wall that his administration had built.

Donald Trump made that statement repeatedly during his presidency and is living up to it now. Our "Never Stop Fighting!" print serves as a constant reminder that our 45th president just won't quit. Even though the Bidens now reside in the White House, 74 million pro-Trump Americans are looking to the former Commander-in-Chief to continue leading the "America First" movement.

If you can contribute $30 or more to help Grassfire continue our grassroots efforts, we'll send you our new and exclusive "Never Stop Fighting!" print of President Trump. As a special bonus for contributions of $50 or more, we'll send you two of these 8" x 10" commemorative photos. Click here or on the banner below to order now:

This inspiring keepsake is produced on high-quality paper and is suitable for framing to display proudly in your home. But this limited-time, Memorial Day offer ENDS TUESDAY MORNING. So don't wait! Click here to order now.

When Grassfire first offered our "Never Stop Fighting!" print in January, it was available for ONLY a limited time. The goal was to create something rare, special and exclusive for our team members -- not flood the market with another Trump commemorative.

But if you act now -- before Tuesday morning's deadline -- you can own one (or two) of these 8" x 10" limited-edition prints. With less than 400 currently in circulation, you can be assured that "Never Stop Fighting!" will be a unique addition to your home or office.

Grassfire remains deeply committed to equipping our team members with the online-activism tools they need for the battles ahead. Promoting and defending our nation's founding principles of life, liberty and limited government has never been more important. We want to amplify YOUR voice in the fight to keep "America First"!

But to do that, we need your ongoing and generous support. Click here to help and you'll receive our "Never Stop Fighting!" commemorative print in appreciation for your contribution of $30 or more. Contribute $50 or more, and we'll send you two of these Trump keepsakes. Thank you, in advance, for standing with us today.

P.S. Again, our "Never Stop Fighting!" offer ends Tuesday morning at 9:00 a.m. CT. Don't miss another opportunity to receive this powerful collectible as a reminder that, even though he's not in the Oval Office, President Trump won't quit on the America people. Click here or on the banner below to receive one of these exclusive commemorative prints for $30 or more and two when you contribute $50 or more to help Grassfire build: