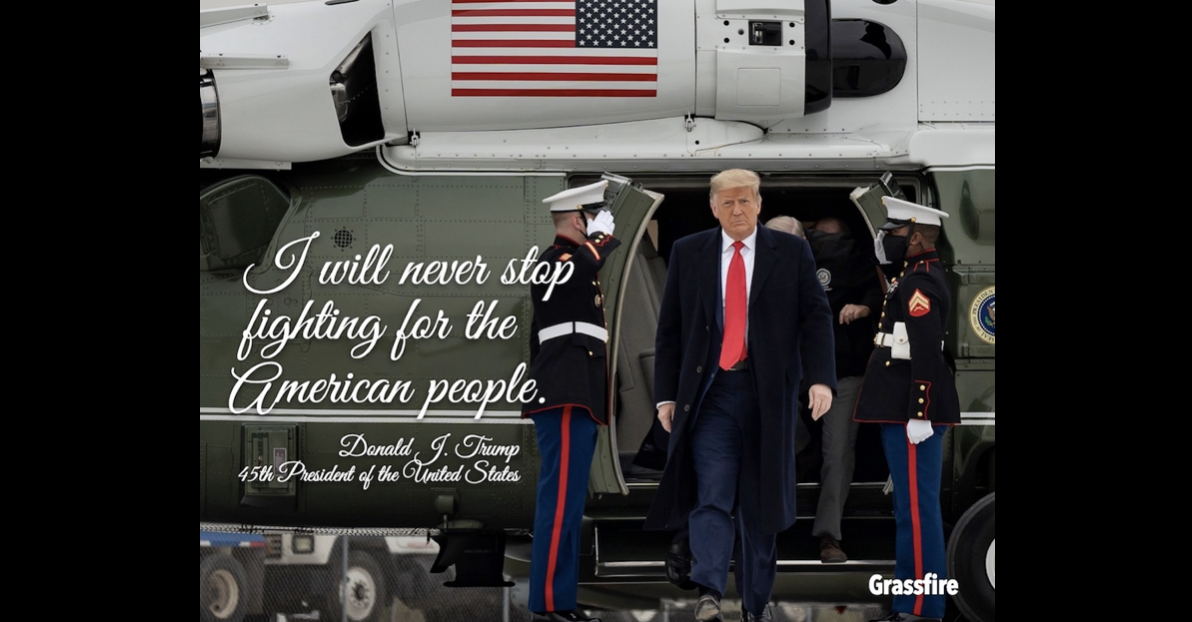 It doesn't seem possible to tens of millions of Americans, but today is the final day of Donald Trump's presidency. Less than a year ago, the nation was celebrating "The Great American Comeback." The U.S. was enjoying record-low unemployment, a record-high stock market and millions of new jobs. Wages were up. Taxes were down. The Democrat-led Witch Hunts appeared to be over. The Commander-in-Chief even made the world safer from terrorism.

A second-term seemed inevitable for a president who looked unbeatable. But in just a few months, everything changed.

As fear and uncertainty over COVID-19 drastically increased, our local, state and even federal government began closing schools and businesses. The pandemic threw the U.S. economy into a tailspin, trampled our civil liberties, and opened the door to vote-by-mail scams that Democrats used to steal the 2020 election.

Now, as the President prepares to exit the White House with his family tomorrow morning, more than 70 million pro-Trump Americans will look to him to continue leading the "America First" movement he started. To commemorate our Commander-in-Chief's final days in office, Grassfire created our "Never Stop Fighting" print.

The stunning photo shows President Trump exiting "Marine One" after touching down in Texas on January 12, 2021. In one of his final acts as Commander-in-Chief, he was in the Lone Star State to inspect a section of the border wall that his administration promised to build.

The quote on this exclusive, commemorative print captures the true spirit of the Trump presidency. Taken from an address to the U.S. Coast Guard Academy, it reads:

If you believed that during Donald Trump's presidency, you can be confident that he'll keep standing for America -- long after tomorrow. Our "Never Stop Fighting" print captures the true spirit of the Trump presidency and the hope that our 45th president will continue leading the "America First" agenda.

If you can contribute $30 or more to help Grassfire build, we'll send you our exclusive, new "Never Stop Fighting" print of President Trump. As a special bonus, for contributions of $50 or more, we'll send you two of these 8"x10" commemorative photos. Click here or on the banner below to order now:

This inspiring photo is produced on high-quality paper and is suitable for framing to display proudly in your home. But this is a limited-time offer, so don't wait! Click here to act now.

Those who want to protect the D.C. Swamp, preserve the Deep State status quo, and fundamentally transform the United States of America have returned to power. Promoting and defending our nation's founding principles of life, liberty and limited government has never been more important. That's why Grassfire remains deeply committed to equipping our team members with the online-activism tools they need for the battles ahead.

We want to amplify conservative voices dedicated to keeping "America First"! But to do that, we urgently need your support. Click here to help and you'll receive our "Never Stop Fighting" commemorative print in appreciation for your contribution of $30 or more. Contribute $50 or more, and we'll send you two of these Trump keepsakes. Thanks, in advance, for your support.

P.S. Again, our "Never Stop Fighting" commemorative print is only available for a limited time. Don't miss your opportunity to receive this powerful keepsake as a reminder that, even though he's not in the Oval Office, President Trump won't quit on the America people. Also, your contribution will help Grassfire continue to empower our team members to stand for America's founding principles of life, liberty and limited government. Click here or on the banner below to receive one of these exclusive commemorative prints for $30 or more and two when you contribute $50 or more to help Grassfire build: