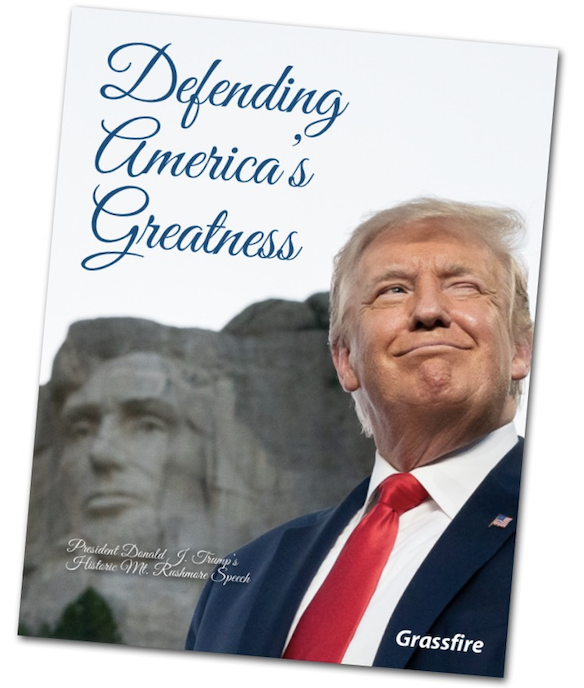 It's hard to understand how 2020, a year that started out so well, turned into this. A once-roaring economy has been devastated by shutdowns and lockdowns. Millions have been sickened and tens of thousands killed by a "mystery" virus from China. And an incumbent president, who was expected by many to coast smoothly to re-election, is fighting for his political life.

But on July 3rd, something changed. In the midst of our national health and economic crisis and at the height of a historic struggle over the very meaning and identity of America, President Trump visited Mt. Rushmore. On the eve of the United States' 244th "birthday," our Commander-in-Chief delivered what may have been the most important speech of his presidency.

In the face of a radical Marxist movement marked by rioting and destruction, the President boldly and unapologetically honored the great leaders on Mt. Rushmore and extolled our nation’s virtues by stating: "This is who we are. This is what we believe. And these are the values that will guide us as we strive to build an even better and greater future."

As he always has, Mr. Trump defended America’s greatness, our exceptionalism and what it means to be a citizen of "the most just and exceptional nation ever to exist on Earth." With our country and its people teetering on the brink of chaos, the President delivered a knockout punch to the radical Left by insisting:

"We are proud of the fact that our country was founded on Judeo-Christian principles, and we understand that these values have dramatically advanced the cause of peace and justice throughout the world."

The President's "July Fourth" speech was bold, inspired and truly historic. America's Commander-in-Chief clearly laid out, for all to see and hear, why it's so important to remember, celebrate and defend America’s greatness.

To commemorate what is likely the most powerful and influential speech of the Trump presidency so far, Grassfire has created Defending America's Greatness. This special publication includes the entire text of the Mt. Rushmore speech, along with stunning photos from the patriotic, South Dakota event.

If you can help Grassfire with a contribution of $30 or more, we'll send you one copy of Defending America's Greatness. Contribute $40 or more and receive two copies of this commemorative book, highlighting President Trump's Mt. Rushmore address. We'll cover shipping and handling. Click here for your book(s) now:

Don't miss this unique opportunity to commemorate what is likely the boldest, most powerful and most important speech of Mr. Trump's presidency. Click here to receive Defending America's Greatness in appreciation for your contribution of $30, $40 or more to help Grassfire build. Thanks, in advance, for your support.

P.S. For 20 years, Grassfire has empowered a grassroots army of conservative, patriotic Americans willing to stand up and say "NO!" to the D.C.  Swamp, the Deep State, the Hollywood "elite," the "fake news" media, the NeverTrumpers and the GOP Establishment. We're engaged in the battles to protect and promote our nation's founding principles of life, liberty and limited government. Few organizations in the country can inform and equip hundreds of thousands of citizens like we can. But WE NEED YOUR HELP to continue fighting in 2020 and beyond! Please click here or on the banner below now to support our efforts and receive Defending America's Greatness in appreciation for your contribution of $30, $40 or more: