SHOCK: CNN is right about Pelosi! 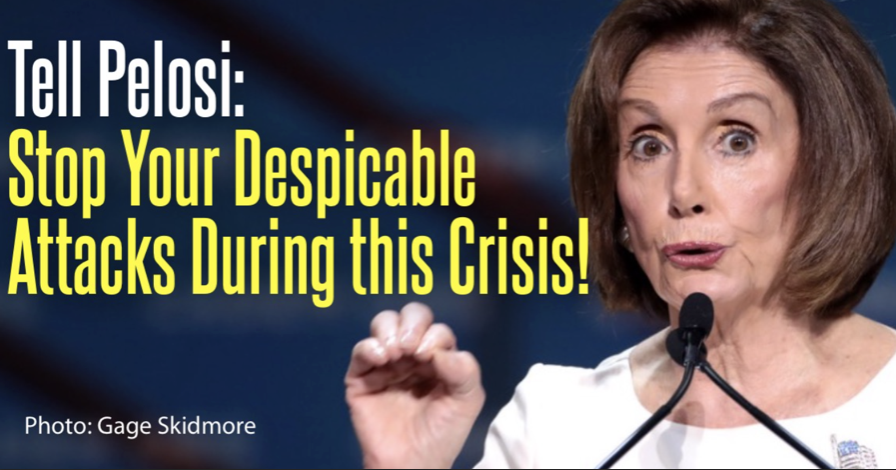 The next five words are ones that we didn't expect to EVER type at Grassfire:

CNN is right about Pelosi!

In an article published on their website yesterday, the far-left leaning, FAKE NEWS network said the Speaker of the House "will never live Salon-gate down." Her visit to a COVID-closed hair salon in California on Monday has been widely criticized. But Pelosi's excuse -- that the salon owner set her up -- has been the source of ridicule. Trump-hating CNN wrote, in part:

Pelosi handed Republicans a gift, since conservatives love to demonize her as a rich socialist who passes laws infringing the freedom of Americans that she ignores herself. Worse, the incident will further politicize mask wearing.

They're not wrong. After slamming Pelosi on Twitter over the past few days, President Trump addressed the controversy last night during his campaign speech in Latrobe, Pennsylvania:

If you agree that the Speaker's attack against the salon owner and single mother is OUTRAGEOUS. Tell Nancy Pelosi that she can't live under a different set of rules than the rest of us and then blame someone else when she gets caught!

Yesterday, Grassfire updated our "Pelosi Outrage" FaxFire. We're empowering YOU to send a clear message to your members of Congress and to key House and Senate leaders -- INCLUDING PELOSI HERSELF!

CLICK HERE OR ON THE BANNER BELOW NOW TO SCHEDULE YOUR FAXES FOR IMMEDIATE DELIVERY ON CAPITOL HILL, DEMANDING THE SPEAKER APOLOGIZE AND BE REPRIMANDED BY CONGRESS:

Millions of Americans are done with the hypocrisy. They're tired of there being one set of rules for the "political and cultural elite" and a different set of rules for everyday Americans. If that's how you feel, click here to tell Speaker Pelosi now. Thanks, in advance for taking action today.

P.S. If you missed yesterday's email about "Salon-gate," please see below. It explains why so many Americans are disgusted and fed up with Left's "good for thee, but not for me" double standard.

Millions of Americans are outraged by what House Speaker Nancy Pelosi (D-CA) did on Monday. She violated California's COVID restrictions by visiting a closed hair salon for a "wash and blow out." Also, in surveillance video, Pelosi is seen NOT wearing a mask -- even though she constantly lectures Americans about it!

What's worse is that the Speaker accused the salon owner of a "set up." In fact, Pelosi told reporters yesterday, "The salon owes me an apology for setting [me] up." But FOX News reports, "Salons in San Francisco had been closed since March and were only notified they could reopen on Sept. 1 for outdoor hairstyling services only."

Pelosi told reporters that her stylist said "they could accommodate people one at a time, and... I trusted that." But how could one of the most powerful Democrats in America not know the coronavirus requirements in her own state?

The salon owner called the high-profile visit "a slap in the face" to her and others in her industry prohibited from working in California. As a result of the controversy and Pelosi's refusal to take responsibility for her hypocrisy and blatant double standard, the salon owner has received death threats and says her business is "pretty much done now."

It's understandable that a public person like the Speaker of the House wants to visit a salon. But she shouldn't be getting her hair styled while rules and restrictions keep millions of other Americans from doing the exact same thing. If Pelosi doesn't like the rules and restrictions, she should work to change them. But instead, the Speaker has been doing exactly the opposite. 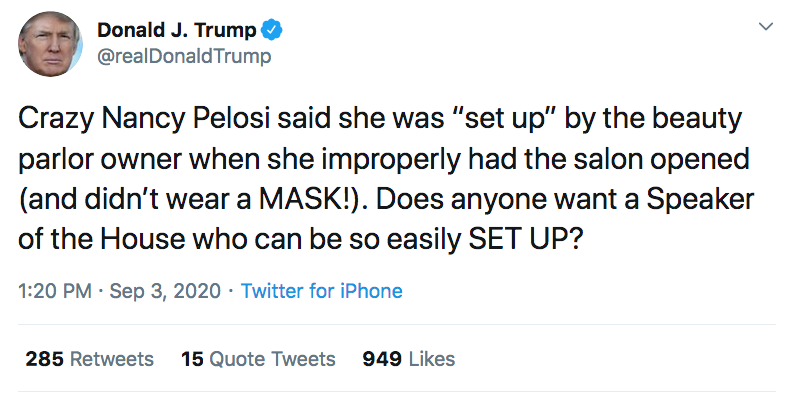 Crazy Nancy Pelosi said she was "set up" by the beauty parlor owner when she improperly had the salon opened (and didn’t wear a MASK!). Does anyone want a Speaker of the House who can be so easily SET UP?

The Speaker's outrageous attack against this salon owner and single mother is OUTRAGEOUS. Our nation and our economy are still trying to emerge from tyrannical, government-mandated COVID shutdowns! But Pelosi is attempting to live under a different set of rules and then blame someone else when she gets caught.

With our nation continuing to battle back from draconian, tyrannical and unnecessary COVID lockdowns and shutdowns, it's time for citizens to let their voice be heard! Pelosi must apologize AND should be reprimanded by members of Congress.

Anticipating that our team members would be OUTRAGED by Pelosi's latest deplorable comments, Grassfire is launching an updated FaxFire TODAY. We're empowering YOU to send a clear message to your members of Congress, key House leaders and PELOSI HERSELF. GO HERE NOW TO SCHEDULE YOUR FAXES FOR IMMEDIATE DELIVERY ON CAPITOL HILL:

(Not a GrassfireVIP? Go here to send this fax at 80% discount.)

Donald Trump Jr. weighed in on the controversy, criticizing Pelosi's "liberal privilege" and her failure to "live by her own rules." He also said the Speaker "is the Marie Antoinette of the 21st-century."

Just last week, Pelosi criticized newly revised CDC guidelines on COVID testing: "It reinforces the lack of attention and understanding that we have to have in order to crush this virus." But if America did not "crush this virus" yet, why are you -- an 80-year-old woman -- risking your life by getting your hair done?

TAKE IMMEDIATE ACTION! SEND YOUR "OUTRAGE FAXES" TO PELOSI, YOUR CONGRESSIONAL DELEGATION AND OTHER KEY LEADERS NOW! DEMAND AN APOLOGY AND OFFICIAL REPRIMAND.

With MILLIONS of Americans being FORCED BY FAR-LEFT POLITICIANS to make sacrifices, this is not the time to launch an OUTRAGEOUS ATTACK against a single mother, struggling to keep her small business afloat.

P.S. Again, the Speaker of the House of Representatives broke California's COVID rules on Monday by going to a closed, San Francisco hair salon for a "wash and blow out." After video of a mask-less Nancy Pelosi "blew up" and went viral, she accused the salon owner of being part of a "set up." If you're outraged by this attack on a financially struggling single mother and small-business owner, Grassfire invites you to take immediate action. Click here or on the banner below now to instantly send personalized faxes to Speaker Pelosi, your Representatives, your Senators and other key leaders in the House and Senate:

This month, we're inviting our team members to go "ALL IN" this election season by becoming a GRASSFIRE VIP. For your monthly contribution of $15 or more, you'll receive  SPECIAL EXCLUSIVE REPORTS every weekday, including a DAILY NEWS DIGEST (that is 100 times better than Drudge) and Grassfire president Steve Elliott's EXCLUSIVE VIDEO BRIEFINGS.