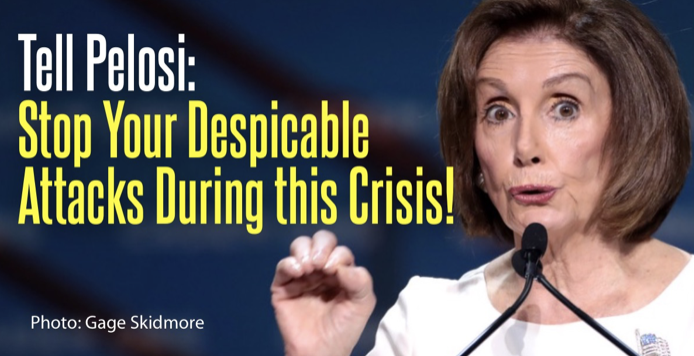 The House of Representatives has been in session for only two days in the past eight weeks. While the Senate has been working on confirming judges and battling COVID-19, Speaker Nancy Pelosi (D-CA) has been missing in action, and the House has been closed for business. Senate Majority Leader Mitch McConnell (R-KY) joked this week: "At this point, I’m wondering if we should send Senators over there to collect their newspaper and water the plants."

But Pelosi's inaction and incompetence are really no laughing matter, especially when the Speaker is using her "free time" to attack the President. On CNN this week, the California Democrat took a swipe at Mr. Trump's weight. After he revealed taking the anti-malaria drug hydroxychloroquine, which had been prescribed by the White House physician, Pelosi said:

"I would rather he not be taking something that has not been approved by the scientists, especially in his age group and in his, shall we say, weight group. What is it? 'Morbidly obese,' they say."

Leave it to a top Democrat to "fat-shame" the President, after the "tolerant" Left has been protesting against doing that for years. First, she should lay off the personal attacks. People who live in glass houses shouldn't throw stones.

Second, hydroxychloroquine has been prescribed in the U.S. since 1955, and it's on the World Health Organization's List of Essential Medicines. Also, The Science Times reported this month that, when taken with azithromycin and zinc, hydroxycloroquine has proven effective in treating COVID-19 patients.

+ + Pelosi And Her Ilk Are Still Trying To Take Down A Duly Elected President!

But that's not all Pelosi and her ilk have been up to this week. On Monday, the House Judiciary Committee said it wanted evidence from Robert Mueller's widely discredited Russia probe, so Democrats can try to impeach the President again! USA Today reports:

"House Democrats told the Supreme Court that it needs grand jury evidence from the Russia probe as they continue to investigate whether President Donald Trump had committed additional impeachable offenses."

Thankfully, the Supreme Court temporarily blocked that request on Wednesday.

How are the recent actions of Pelosi and other House Democrats helping in any way, shape or form to get America and its people back on track from the devastation caused by coronavirus? The economic and emotional costs of another baseless, partisan impeachment inquiry against the President is NOT what our country needs right now.

+ + Speaker Pelosi MUST Apologize And Be Punished For Her Despicable Attacks Against President Trump!

If you're tired of Pelosi's petty and ongoing attacks against the President, Grassfire wants to empower you to make your voice heard. If you think the Speaker should apologize and be punished by Congress, we're giving team members, like you, the opportunity to tell her EXACTLY what they think.

With our "PELOSI OUTRAGE" FaxFire, you can send a personalized message directly to her office on Capitol Hill. These faxes also target your congressional delegation and other key lawmakers in the House and Senate.

If you're sick of the Speaker's despicable attacks, Grassfire can empower YOU to send a clear message to your members of Congress, key House leaders and to Nancy Pelosi HERSELF. Go here now to schedule your "PELOSI OUTRAGE" FAXES for immediate delivery on Capitol Hill:

Last month, when news of yet another possible House Witch Hunt broke, the President responded by saying: "This is not the time for politics. Endless, partisan investigations -- here we go again." This week, Mr. Trump said of Pelosi, "I think she's a waste of time."

Our Commander-in-Chief is absolutely right on both counts!

With tens of thousands of Americans killed by this virus and every citizen being called upon to make sacrifices, this is NOT the time for the Speaker of the House to launch outrageous, partisan attacks on the President.

The Speaker's deplorable, divisive rhetoric during this time of crisis MUST end! Take immediate action by faxing Nancy Pelosi, your congressional delegation and other key House and Senate leaders in Washington, D.C. Demand the Speaker apologize and be punished by Congress! Click here to fax now.

P.S. Again, the U.S. economy is in free fall and nearly 40 million jobs have been lost due to draconian lockdowns and harmful, stay-home edicts. Shame on Pelosi and her minions for attacking Mr. Trump as he and the rest of America struggle to overcome the devastating effects of the COVID-19 crisis. If you agree, click here or on the banner below now to schedule your "PELOSI OUTRAGE" faxes for immediate delivery on Capitol Hill: