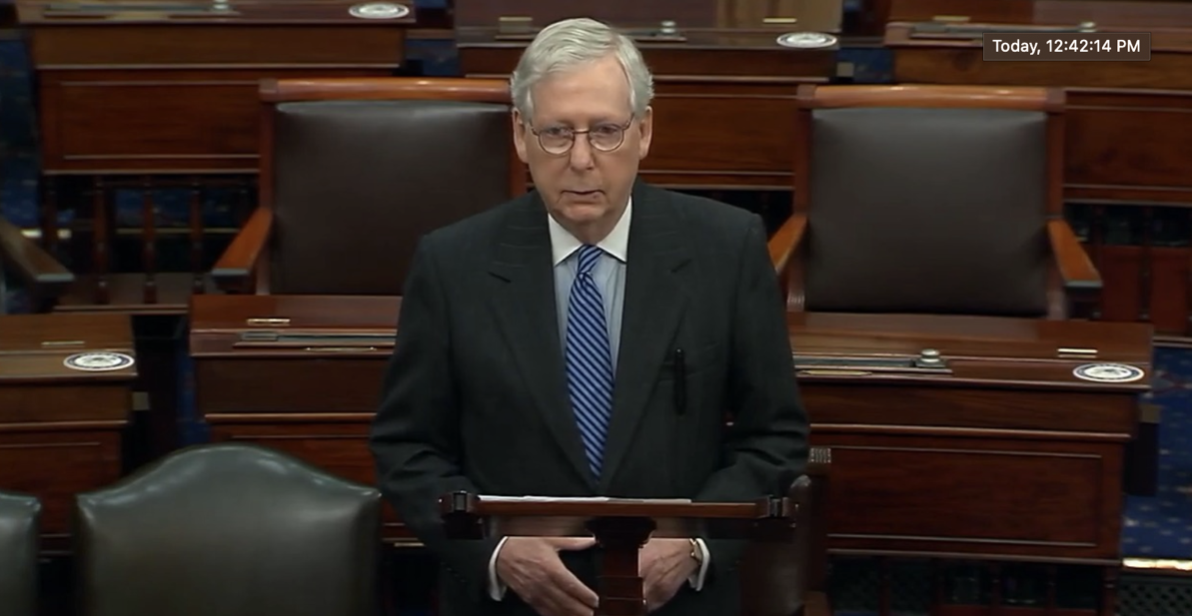 What is Mitch McConnell doing?! The Senate Majority leader congratulated "President-Elect" Biden on the Senate floor this morning. His outrageous comments included:

Wait... what? The Electoral College may have "spoken," but nothing's "official" until Congress certifies the electoral votes on January 6, 2021!

On Twitter early this morning, America's Commander-in-Chief called on Republicans to "Get moving" against "(t)his Fake Election." We're pretty sure President Trump didn't mean he wanted the "leader" of the United States Senate to hoist the white flag of surrender.

If you agree, Grassfire has two "action items" for you to consider today. First, call McConnell and tell him you're OUTRAGED by today's betrayal of President Trump. Make your voice heard!

Our staff called the Senator's D.C. office today. We reached a recorded message and an announcement that his voice mailbox "cannot receive messages at this time." So, here are the phone numbers for all SEVEN of McConnell's taxpayer-funded offices:

Second, use Grassfire's "Stop The Steal!" FaxFire to demand McConnell and the other 52 Republicans in the Senate take immediate action to prevent radical Democrats and the Unhinged Left from hijacking the 2020 election! For just $30, you can reach EVERY Republican Senator, key lawmakers in battleground states, AND the governors of Arizona, Georgia, Michigan, Nevada, Pennsylvania, Virginia and Wisconsin.

Click here or on the banner below now to fax your personalized message to all 53 GOP Senators, 16 elected officials in GA, PA, MI and WI, along with SEVEN governors in key battleground states. That's 76 faxes in all for just .$40 each:

Over the past several years, Sen. Mitch McConnell (R-KY) has been the chief architect of the GOP's "Play Fight & Surrender" strategy in Congress. Grassfire has long criticized McConnell for giving in to Democrats. His "go along to get along" approach has brought disastrous consequences, including ObamaCare, ObamaGate, out-of-control spending and more.

In 2015, Grassfire team members sponsored efforts to send hundreds of literal white flags to McConnell and then-Speaker of the House John Boehner in Washington, D.C. They were a SYMBOL of the cowardice of the GOP RINO leadership that continually rubber-stamped Obama's agenda.

Sadly, some things never change. The Senate Majority "Leader" knowingly tried to legitimize a Biden "victory" on the Senate floor today. Mitch McConnell should be ashamed of himself.

Please consider taking action by calling AND faxing McConnell's office now. Click here to immediately send your personalized, pro-Trump, "Stop the Steal!" messages to Capitol Hill. Or to send your own faxes, click here for our complete list of targets and their contact info. Thank you, in advance, for standing with President Trump today.