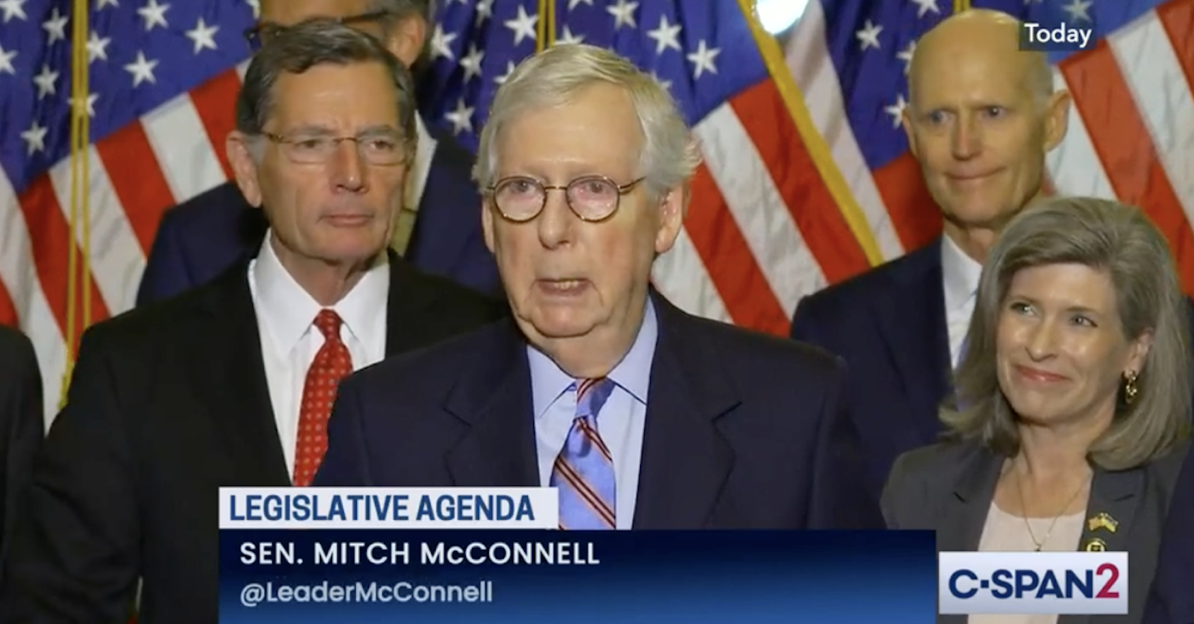 "I'm comfortable with the framework, and if the legislation ends up reflecting what the framework indicates, I'll be supportive."

Honestly, the Senate Minority "Leader's" announcement yesterday wasn't much of a surprise based on the statement he released on Sunday. Shortly after the agreement in principle between Democrats and the 10 "Republican" turncoats, the "Great RINO King" said in a statement:

"I am glad Senators Cornyn and Murphy are continuing to make headway in their discussions. I appreciate their hard work on this important issue. The principles they announced today show the value of dialogue and cooperation. I continue to hope their discussions yield a bipartisan product that makes significant headway on key issues like mental health and school safety, respects the Second Amendment, earns broad support in the Senate, and makes a difference for our country."

By siding with Democrats on the non-existent bill, these 11 RINOs will help deliver the 60 votes necessary to block a Senate filibuster. That will empower Congress to pass a bill that Joe Biden will sign into law, limiting your constitutional right "to keep and bear Arms."

+ + NEW: For Only $15, Instantly Fax All 10 RINOs Attacking Your Second Amendment Rights!

The bill opens the door to enacting "red flag" laws that violate the due-process rights of American gun owners. (Learn more about that from Tucker Carlson by reading yesterday's "Second Amendment Update" below.) But since the legislation only exists "in principle" right now, no one knows for sure what other infringements they'll bake into it.

In response to the 10 RINOs caving on Second Amendment rights, Grassfire updated and re-launched our "Stop Biden's Gun Grab!" FaxFire on Monday. Grassfire included McConnell in our "Level 1" faxes because we figured his "cave" was imminent. (Sadly, we were right.) Take action now to instantly reach your two Senators, the Senate Minority "Leader" and the 10 weak-kneed Republicans who agreed to a gun-control bill that isn't even written yet!

Click here or on the banner below to immediately send up to 15 faxes to Senate offices on Capitol Hill for only $15. You also can fax a personalized pro-Second Amendment message to all 50 GOP Senators for only $30, or reach EVERY member of the United States Senate (100 faxes) for only $50:

The Second Amendment clearly states: "The right of the people to keep and bear Arms shall not be infringed." When criminals, terrorists and the mentally ill use guns to hurt and kill people, it's tragic and unacceptable. But the U.S. Constitution is very specific when it comes to gun control. Mentally competent, law-abiding Americans should not be prevented from exercising their constitutional right "to keep and bear Arms."

Even if you've reached out to lawmakers before to protect your Second Amendment rights, please consider faxing them again. This updated FaxFire targets your two Senators, Senate Minority Leader Mitch McConnell (R-KY) and the ten other RINO Senators for only $15. Reach every remaining Senate Republican (up to 52 faxes) for $30, or fax all 100 U.S. Senators for just $50. Click here to send your "Stop Biden's Gun Grab!" faxes now.

Again, if you missed yesterday's "Second Amendment Update," we've included it below. Find out why FOX News' Tucker Carlson declared: "'Red flag' laws are unconstitutional. Period." To send your own pro-Second Amendment faxes to lawmakers, click here for a list of Senate targets and their contact information. Thanks, in advance, for taking action today.