Thanks for Taking Action On Impeachment!

Now, With A House Vote Imminent, Fax Congress And Say "NO!" On Impeachment!

The three-year-long Witch Hunt has come to this -- the House of Representatives is preparing to vote on two articles of impeachment against President Trump. It's time for citizens to rise up and let House members know where you stand! 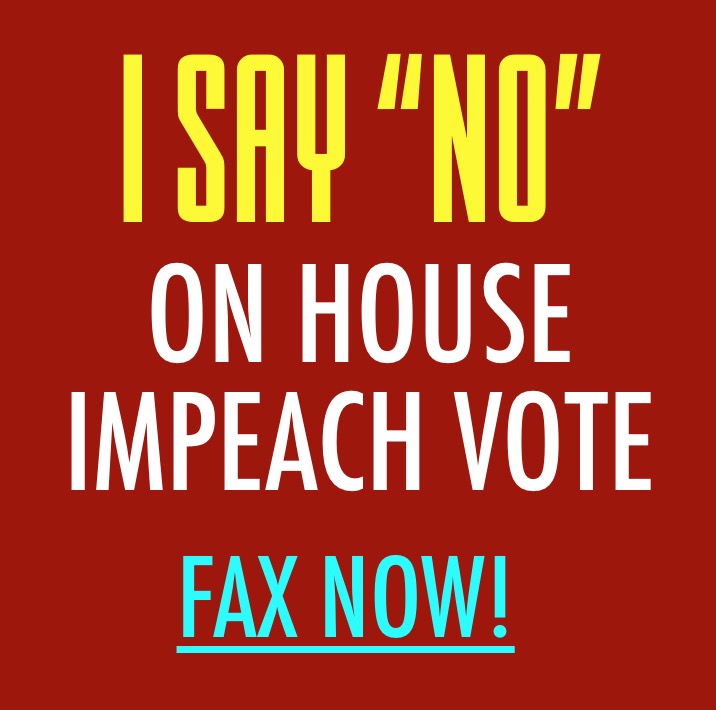 If you're outraged by this Democrat-led, impeachment-inquiry Witch Hunt against the President, then utilize our unique FaxFire system NOW! Instantly send your I SAY "NO" ON IMPEACHMENT faxes directly to the halls of Congress.

Reach key VULNERABLE House Democrats (Dems who are in contested seats or in districts won by Mr. Trump in 2016) along with your Rep and two Senators -- up to 52 targets -- for just $20 (MORE THAN 50% DISCOUNT!). Expand your impact to also reach the GOP Wafflers for just an additional $12, OR add 80 additional House Dems at a 70% discount!

IMPORTANT: Grassfire has DEEPLY discounted the I SAY "NO" ON IMPEACHMENT FaxFire to support your efforts to "Fight The Coup!" against America's Commander-in-Chief. Reach Democrats who are fanning the flames of impeachment and Republicans who need to stand with President Trump! (To see a complete list of FaxFire targets and their contact information, click here.)

I'm saying NO on House Impeachment Vote!
Thanks for Taking Action On Impeachment!
Read the blog at Grassfire