The clock is ticking on a Senate vote that could start an avalanche of trillion-dollar spending by Joe Biden and his fellow Democrats. Patriots have 24 hours to stop it! Please see our urgent update below. --Grassfire

Just minutes after completing this morning's "Biden's Boondoggles" update, we received an email from the office of Senate Minority Leader Mitch McConnell. It confirmed that a procedural vote on the still-unfinished, $1.2-trillion "infrastructure" bill will happen TOMORROW:

"Indeed, last night Senator Chuck Schumer (D-NY-14) filed cloture on the MTP [motion to proceed] to H.R.3684, which will serve as the shell to insert the invisible, yet to be seen/completed text of the bipartisan infrastructure framework.

"This vote will occur on Wednesday, and it remains – literally – to be seen what the Senate will actually vote on."

While House legislation can serve as "framework," the Senate has to write their own version -- and the "infrastructure" bill isn't finished yet. Americans don't need more of the Democrat lunacy enshrined in House Speaker Nancy Pelosi's (D-CA) infamous 2010 plea to pass ObamaCare: "We have to pass the bill so that you can find out what is in it."

Republicans remember how poorly that turned out. Fast forward 11 years, and Democrats are still up to their old, dirty tricks. If GOP Senators fall for it again and vote for a bill that "doesn't exist" (see below), they'll have no one to blame but themselves. And the American people will, literally, pay the price -- AGAIN!

It would be unconscionable for ANY Republican to support a $1.2-trillion spending bill that hasn't been completely written. Urge GOP Senators to stand firm, stay united and fight back against "Biden's Boondoggles." Click here to fax now. Thanks, in advance, for taking action.

P.S. If you missed this morning's update, we've attached it below. Learn what Sen. Lindsey Graham (R-SC) said about Schumer's plan to have the Upper Chamber vote on a trillion-dollar "infrastructure" bill that "doesn't exist." To take immediate action, click here or on the banner below and demand Senators "Stop Biden's Boondoggles!" now:

Republican Senators are putting up a fight against Senate Majority Leader Chuck Schumer (D-NY). They're pushing back against his plans to ram the first of two HUGE spending bills down the collective throats of American taxpayers. 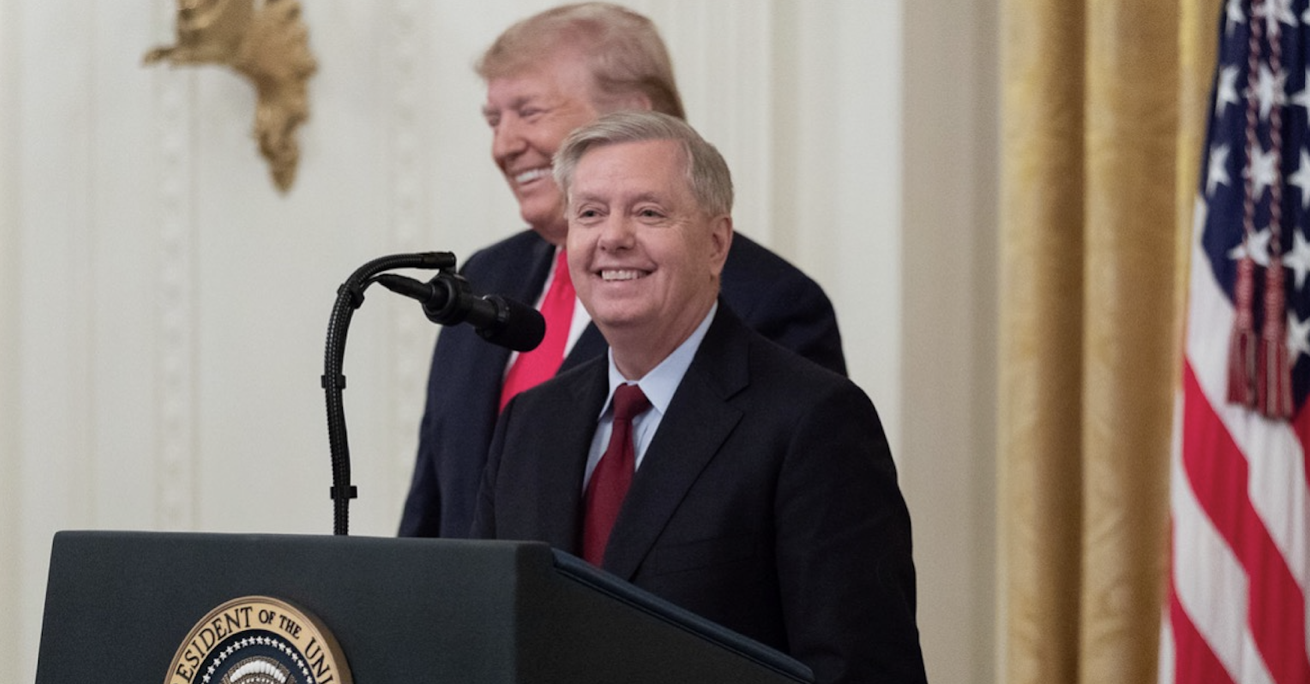 Schumer is calling for a procedural vote THIS WEEK on a $1.2-trillion spending bill that's not even written yet! On FOX News last night, Sen. Lindsey Graham (R-SC) insisted it was "insane" to vote on legislation that "doesn't exist":

"We're not gonna proceed to a bill that's not written because that makes no sense. So if Joe Biden really wants to do infrastructure -- roads, bridges and ports -- for around a trillion dollars, there are plenty of Republicans that will work with him. Chuck Schumer is trying to blow this effort up."

Other Senate Republicans are blasting Schumer for wanting to vote on $1.2 trillion, "infrastructure" legislation that Democrats are still writing. Senate Minority Leader Mitch McConnell (R-KY) said this week, "We need to see the bill before voting to go to it. I think that's pretty easily understood." Even RINO Sen. Susan Collins (R-ME) agrees: "There's no point in having [a vote]."

Senate Republicans MUST keep up the pressure on Schumer and other socialist-leaning Democrats. Now is NOT the time for the GOP to back off or stand down. That's why Grassfire is empowering YOU to tell Republican Senators to stand firm, stay united and fight back!

Utilize our unique FaxFire system to instantly make your voice heard on Capitol Hill. Click here or on the banner below now if you oppose the latest Biden Boondoggle. Fax all 50 Senate Republicans and moderate Democrat Senators Joe Manchin (WV) and Jon Tester (MT) for only $30. Or reach every U.S. Senator (100 faxes) for just $50:

Schumer needs 60 votes for the Senate to move forward on his still-unfinished, $1.2-trillion spending bill. That means at least 10 Republicans will have to "break ranks" and vote "Yes" for the boondoggle legislation to pass in the Upper Chamber. If the GOP Senators cave, they could put American taxpayers on the hook for $3.5-trillion in additional spending for a Democrat wish-list of "human infrastructure." Click here to fax Senators now.

As Graham said, infrastructure spending on roads, bridges, ports, etc. is necessary and negotiable. But to radical Democrats, infrastructure is whatever they want it to be. Far-left lawmakers are on record promoting paid leave, childcare, "caregiving," police accountability, affordable housing, fighting "climate change" and even packing the Supreme Court as "infrastructure."

Also, this $1.2 trillion legislation could open the flood gates to a $3.5-trillion Democrat spending bill that could pass via "budget reconciliation." That means it could become law without a single Republican vote! If GOP Senators don't stop these progressive giveaways now, Americans will soon witness the biggest expansion of government in our nation's history.

This a CRITICAL week that could decide whether or not America takes our first steps to full-blown socialism. Time is short to make your voice heard. Go here to fax Senators now. Thanks, in advance, for taking action today.

P.S. Merriam-Webster Dictionary defines "boondoggle" as "a wasteful or impractical project or activity." The Biden regime's latest boondoggle wants taxpayers to finance a $1.2 trillion radical, far-left Democrat "wish list." That bill could open the door to $3.5 trillion in additional spending that would drag America into full-blown socialism. Click here to instantly send your "Stop Biden's Boondoggle!" faxes to 50 GOP Senators, along with Sens. Manchin and Tester, for just $30. Or reach all 100 U.S. Senators for only $50: