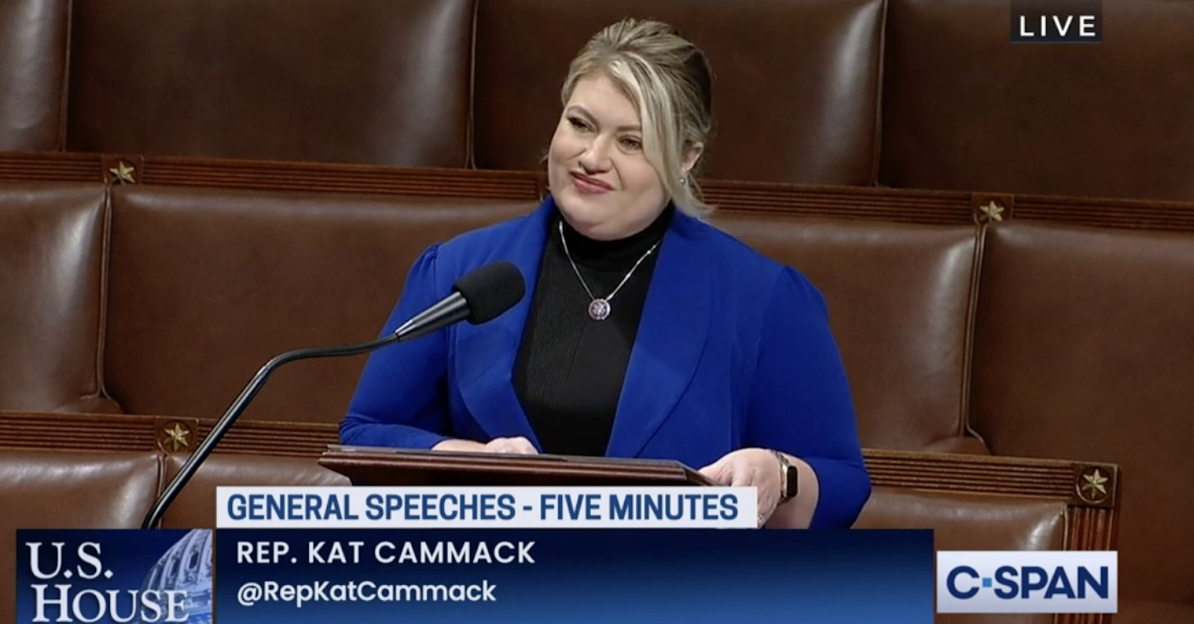 FOX News reports that more than 30 Democrat Senators were in favor of the filibuster in 2017. Now, just five years later, the radical, unhinged Left is claiming the 60-vote threshold to pass legislation is the Upper Chamber is "a threat to democracy." But the real reason they want to "nuke" the filibuster isn't just to STEAL OUR ELECTIONS: Democrats want the power to pass Joe Biden's socialist, Big Government agenda with ZERO Republican support!

The Democrats' "Freedom to Vote Act" and "John Lewis Voting Rights Act" are "dangerous," "scam" legislation, according to Rep. Kat Cammack (R-FL). In a video posted on The Gateway Pundit, she explains how the House voted last week to "takeover our elections" by gutting a previously passed bill for NASA infrastructure (H.R.5746). Democrats then replaced the legislation's language with their "egregious" voting-rights agenda and passed the bill 220-203.

Cammack warned that the bill seeks to restrict state rights to enforce voter ID laws. She added that the legislation also allows "ballot harvesting" (which she calls "a breeding ground for fraud") AND it empowers illegal aliens to vote in U.S. elections!

Now that H.R.5746 has passed the House, it will move back to the Senate, where Majority Leader Chuck Schumer (D-NY) could push for a vote THIS WEEK. The Upper Chamber passed the pre-gutted NASA bill back in mid-December. What will happen now to the "love child" legislation (as Cammack called it) should concern EVERY "America First" patriot!

Schumer and his fellow radical Democrats want A FEDERAL TAKEOVER OF FUTURE ELECTIONS! And they're willing to kill the Senate's 60-vote filibuster to do it! The far-Left is fighting their ideological war on several fronts in hopes of making it easier to pass Joe Biden's radical, socialist agenda, while also intimidating, censoring and silencing Trump supporters.

"America First" patriots know that "voting rights" is Democrat code for hijacking future elections. That's why Grassfire is empowering you to let key Senators know where you stand. If you do NOT want Schumer to -- as McConnell said in October -- "rig the game" (like they did in 2020), click here or on the banner below now to sign the "PROTECT OUR ELECTIONS!" national petition:

Senate Minority Leader Mitch McConnell (R-KY) has repeatedly slammed the radical, unhinged Left's ongoing attempts to "federalize all 50 states' elections." He continues calling the Democrats' attempts to hijack future elections the "Big Lie." His office staff even renamed the "Freedom to Vote Act," calling it the "Freedom to Cheat Act."

Back in May, Sen. Ted Cruz (R-TX) labeled the bill "The Corrupt Politicians' Act" and called the "partisan power-grab" by Democrats "radical legislation ... designed to ensure that Democrats never lose another election." Last week, Sen. Rand Paul (R-KY) insisted the far-Left narrative of voter suppression is ''a pack of lies."

That's why Republican Senators need to know that "America First" patriots stand with them in the fight to PROTECT OUR ELECTIONS! Thankfully, Sinema and Manchin STILL support the filibuster. This is your chance to tell them to stand firm and stay united against Schumer's partisan power-grab. Go here to add your name now.

+ + Make Your Voice Heard In The Fight To PROTECT OUR ELECTIONS!

Grassfire mobilized the recent delivery of more than 30,000 "Protect Our Elections!" petitions on Capitol Hill. If you want your name to be included in our next delivery, we MUST hear from you! Thanks, in advance, for making your voice heard today.

P.S. With Republicans likely to gain control of the House and Senate in the 2022 midterms, the radical, unhinged Left is entering panic mode. Schumer is pushing his ELECTION STEAL this week in a blatantly partisan power-grab. This legislation is dangerous, un-American and seeks to tilt ALL future elections toward Democrats. Click here or on the banner below to sign the national petition to "Stop The Corrupt Politicians' Act!":