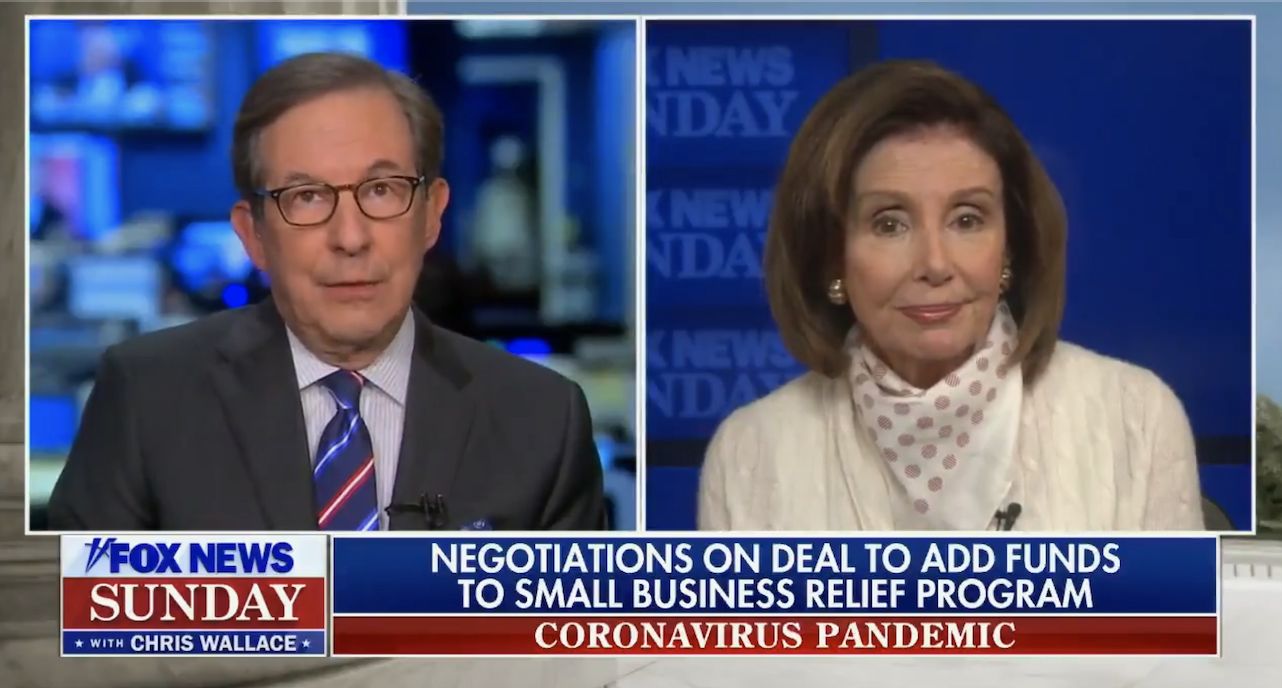 Another day, another Pelosi lie.

On FOX News Sunday yesterday, anchor Chris Wallace challenged the Speaker of the House about her now infamous trip to San Francisco's "Chinatown" on February 24. The California Democrat continues to criticize President Trump for his actions related to the COVID-19 pandemic. Yet, more than three weeks after America's Commander-in-Chief suspended flights from China due to the outbreak, she was telling her constituents:

Yesterday, Wallace asked, "If the president underplayed the threat in the early days, Speaker Pelosi, didn’t you as well?"

"No," Pelosi claimed. "[I] thought it was necessary to offset some of the things that the president and others were saying about Asian-Americans and making them a target. A target of violence across the country -- hate crimes."

But Mr. Trump NEVER criticized Asian-Americans. In fact, he tweeted this on March 23:

"It is very important that we totally protect our Asian American community in the United States, and all around the world. They are amazing people, and the spreading of the Virus is NOT their fault in any way, shape, or form."

Nancy Pelosi's "Trump Derangement Syndrome" is out of control. It's so bad now that she appears willing to further "tank" the U.S. economy in an attempt to hurt the President. The House Speaker and Senate Minority Leader Chuck Schumer (D-NY) are refusing to continue funding the job-saving Paycheck Protection Program (PPP), which ran out of money last week.

On Friday, we told you how Republicans AND some Democrats were calling on Pelosi and Schumer to stop obstructing congressional attempts to continue saving American jobs through PPP. When confronted by George Stephanopoulos on ABC News' "This Week" yesterday about "your own Democrats who are saying ... it's important to pass the PPP funding, right now," Pelosi claimed:

"I don't know who's saying that." Really? We have the quotes from fellow Democrats right here calling on you to take action now!

With 20+ million Americans thrown out of work in just the past four weeks, Pelosi and Schumer and their minions should be ashamed of themselves for holding up funding -- and the American people should call them out for it! If you're sick of their despicable actions, Grassfire is empowering YOU to send a clear message to your members of Congress, key House and Senate leaders, as well as to Pelosi and Schumer! Click here or on the banner below now to schedule your "PELOSI OUTRAGE" faxes for immediate delivery on Capitol Hill:

Even in the midst of the COVID-19 crisis, Pelosi and Schumer STILL can't manage to put aside her hyper-partisan, anti-American hate for President Trump in order to help Americans in crisis. Tens of thousands of people have died; millions of Americans have been thrown out of work by panicked, nationwide shutdowns; and one of the most robust economies in U.S. history has been devastated.

Pelosi even delayed last month's $2.2 TRILLION bipartisan, government bailout by a full week. Now, she and Schumer REFUSE to act and release additional funds for the Paycheck Protection Program. If the money was for illegal aliens or to fund abortions, do you think the two Democrat "leaders" would be dragging their feet?

FAX PELOSI, SCHUMER, YOUR CONGRESSIONAL DELEGATION AND OTHER KEY D.C. LEADERS NOW! DEMAND AN APOLOGY AND PUNISHMENT FOR THE SPEAKER'S DESPICABLE ATTACKS.

Finally, Grassfire added Sen. Schumer to the "PELOSI OUTRAGE" FaxFire on Friday. We also updated our letters to include language calling out both Democrats for their obstruction. So, even if you've sent faxes previously, please consider taking action again. Click here to fax now.

P.S. Tell the Speaker and Senate Minority Leader what you think using Grassfire's "PELOSI OUTRAGE" FaxFire. Send a personalized message directly to their offices, to your congressional delegation and to other key lawmakers on Capitol Hill. If you're sick of the despicable attacks against President Trump and their obstruction over PPP, click here or on the banner below now to schedule your faxes for immediate delivery: