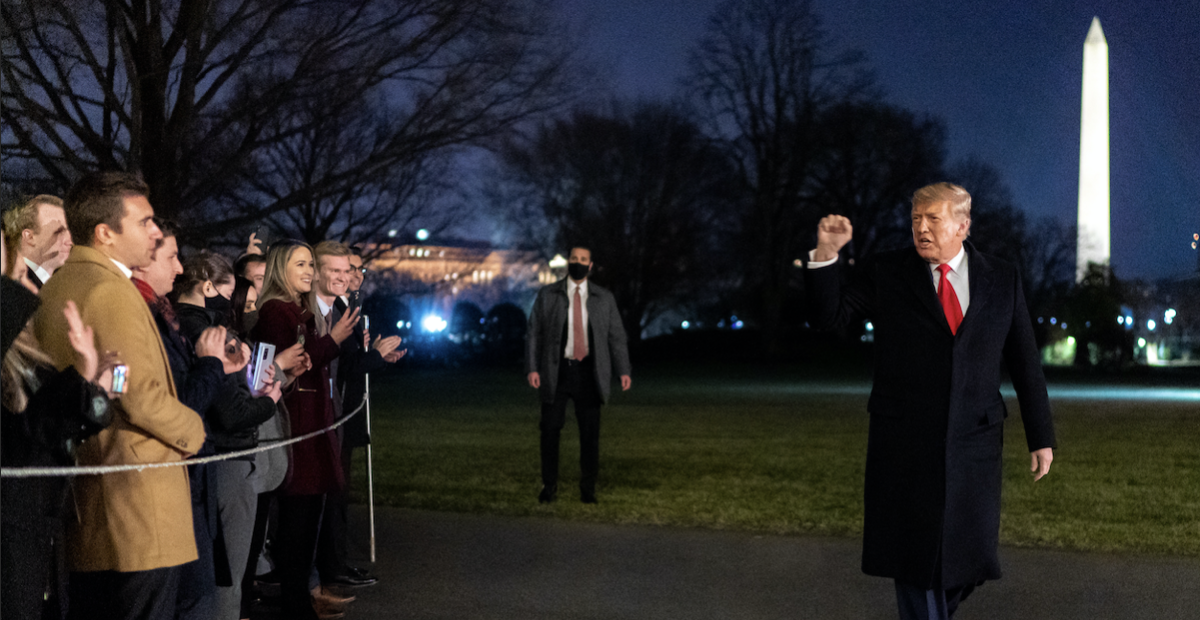 Today is a tough day. Day One of the "Dark Winter" (quite a rallying cry for a presidency).

But I see reasons to be optimistic... to envision that the "Great Reset" they have planned will actually be a "Great Awakening" of faith and liberty in our land.

Count me crazy, but that's the perspective I woke up with this morning, and I believe for good reasons. Here are a few:

This is the actual verdict of the November elections: We won. First of all, President Trump gained more LEGAL VOTES than any incumbent president in our history -- about 8 million more votes than Obama in 2012. Second, conservatives made significant gains in the House of Representatives. Despite all the predictions of a "blue wave," the GOP actually picked up 11 seats in the House. Those results alone demonstrate a total repudiation of the Left's agenda and set Republicans up to take control of the House in just two years.

That's because the incumbent party almost always loses seats in the midterm election. Since Clinton's first midterm, the incumbent party has lost an average of 30 seats in the House. Over the past four midterm elections, the average losses of the current president's party in the House has been 41 seats. Republicans need to flip only four to six seats to end the reign of Nancy Pelosi.

Red State adds, "The result of reapportionment will likely be that Texas will gain two seats, and Arizona, Colorado, Florida, North Carolina, and Oregon would each add one seat." Their analysis indicates that "reapportionment should create four new GOP seats starting in 2022." These four new seats alone are just about enough to eliminate Pelosi's speakership.

So as the "dark winter" begins, can you envision the end of Nancy's reign in just two years?

The same is true at the statehouse level. The Left spent MILLIONS in its effort to flip key statehouses in swing states such as Texas, Pennsylvania, North Carolina, Iowa, Minnesota, Florida and Michigan. They lost in ALL these key states. The GOP actually gained one statehouse. This is extremely significant because the HARD POLITICAL WORK of correcting the errors of the 2020 presidential election must happen in the swing-state legislatures. This is the only way to prevent another "engineered" presidential-election result.

This is an immutable law of modern American political life: the Left always "jumps the shark." They overreach, and as a result, the insanity of leftist policies and priorities is revealed. This was exposed in the aftermath of the breach of the U.S. Capitol. The Left immediately began a massive PURGE of President Trump and anyone who dared to vote for him. The Pelosi impeachment was a travesty -- the very definition of a witch hunt. Just read the actual Article of Impeachment. It is one of the most shameful political acts in American history.

"Trump Derangement Syndrome" could tie up the Senate for weeks in an impeachment trial that will only serve to expose the Left's agenda. And let's be clear: The only reason for a Senate trial on impeachment is because the entire political ruling class is still afraid of President Trump. They fear that he will dominate the political landscape for the next three years and then run again (more on that in a minute).

The Left will overreach on policy as well. It's already happening. Massive amnesty has already been announced, and that's just the beginning. Thanks to Biden, Pelosi and Schumer, the Democrat party will drive itself so far out of the mainstream that its midterm losses could be historic in size.

I say this with one caveat:

If McConnell and the Senate RINOs provide the 17 GOP votes needed to actually convict President Trump of the bogus impeachment charges, it will mark the end of the Republican party as we know it, at least at the federal-election level. Millions of voters will leave and never come back.

It's more likely that the Left's overreach on a Senate impeachment trial will actually serve to unite the GOP with its base, especially if Schumer continues the "witch hunt" and doesn't really allow the President to make a reasonable defense against the charges.

The Left thinks they've defeated President Trump, but I think just the opposite happened. By engineering the election result and depriving him of his second term, the Left actually may have extended Trump's political hegemony. "Hegemony" is defined as "predominance" or "preponderance." In political terms, it's generally thought of as one country's dominance over other countries. In this context, I'm talking about the President's dominance over the American political landscape.

Ever since "Candidate Trump" came down that escalator in 2015, he has dominated the American political landscape. That dominance continued right up until his last day in office, and if the Senate conducts an impeachment trial, Trump will dominate Biden's "first 100 days." And if you think President Trump is going away after that, think again.

He's an entrepreneur at heart, and he will immediately go to work to fix the structural problems of 2020 that resulted in the engineering of the election result. I won't be surprised if Trump Inc. creates or backs a cloud-based alternative to Silicon Valley's dominance of social media. I also expect the president's political efforts to continue, with a laser-like focus on the swing-state legislatures that must correct the errors of 2020.

With the GOP likely in control of the House in 2022 and with a new pro-liberty infrastructure being developed, the 2024 election will begin in earnest in just two short years. And President Trump will be at the center of it all, either as the nominee or the "kingmaker" who endorses the next nominee. As a result, it is quite possible that the Left's efforts to destroy President Trump right now will actually extend his political hegemony to TWELVE YEARS.

We may even get a more focused, more determined version of President Trump. Ronald Reagan's defeat in 1976 actually served to focus and prepare "The Gipper" for his win in 1980. Sure, the circumstances are different, but only a fool would underestimate Donald Trump.

Finally, we must maintain our confidence that the TRUTH and the FREE MARKETS will win. Yes, we're living in one of the most perilous times, certainly in our lifetimes, for the very idea of liberty and limited government. The Left has been very open about its agenda of using the COVID pandemic to launch a "GREAT RESET" around Marxist values that eliminate our liberties.

I can't recall a time when a U.S. presidential candidate utilized, as his campaign slogan, the same slogan that was being used by other world leaders. "Build Back Better" isn't a Biden idea. It originated with the United Nations and the World Economic Forum and has been trumpeted by Boris Johnson (Britain), Justin Trudeau (Canada) and others in the past year. Here's how the World Economic Forum explains the "BBB" response to COVID:

"For businesses, building back better is about much more than corporate social responsibility: it is about truly aligning markets with the natural, social and economic systems on which they depend. It is about building real resilience, driving equitable and sustainable growth, and reinventing capitalism itself."

Of course, this had nothing to do with a global pandemic other than using the pandemic to re-make society. But to do so, they had to get rid of Trump. Then they had to silence any voice of opposition (THE PURGE).

But the "Great Reset" won't work, because deep in the heart of the human soul is a thirst for liberty and a thirst for truth. Yes, the PURGE is dangerous and insidious. But it will force us to restructure ourselves and get engaged in building infrastructures and networks that support liberty. It's already happening. But we are just at the very outset of what could well be the end of Silicon Valley's "lordship" over our electronic lives. And if it weren't for this crisis, we might never take the difficult -- but necessary -- steps to ensure the long-term freedom of our society in the digital age.

So that's why I'm optimistic as the Biden "Dark Winter" launches. I'm not naive about the difficulties we face now and will face is the days and weeks ahead. It will be a difficult political battle -- even more intense than during Obama's first years. But there's good reason to believe liberty will win, if we stay engaged and commit to doing the heavy lifting that our time in history demands.

Grassfire is more determined than ever to serve as part of liberty's answer. In a very real way, here at Grassfire, we feel called "for such a time as this" to provide resources and information and perspective and ways for you to stay engaged. We have one of the largest and most-active email and web networks of patriotic citizens. But we must do more. We must build and grow RIGHT NOW. And to do that, we need your help!

Yesterday, President Trump said, "The movement we started is only just beginning." This morning, he reiterated a statement he made at a 2017 address at the U.S. Coast Guard Academy:

Never stop fighting. That defines where we are right now. We just put that quote on a special, Grassfire-exclusive, President Trump print that captures the true spirit of his presidency and the determination we all need as we move ahead.

If you can contribute $30 or more to help Grassfire build, we'll send you our new "Never Stop Fighting" print of President Trump. As a special bonus, for contributions of $50 or more, we'll send you two of these 8"x10" commemorative photos. Click here or on the banner below to order now:

This inspiring photo is produced on high-quality paper and is suitable for framing to display proudly in your home. But this is a limited-time offer, so don't wait! Click here to act now.

+ + Help Grassfire equip you to fight for "America First"!

Those who want to protect the D.C. Swamp, preserve the Deep State status quo, and fundamentally transform the United States of America have returned to power. Promoting and defending our nation's founding principles of life, liberty and limited government has never been more important. That's why Grassfire remains deeply committed to equipping our team members with the online-activism tools they need for the battles ahead.

We want to amplify conservative voices dedicated to keeping "America First"! But to do that, we urgently need your support. Click here to help and you'll receive our "Never Stop Fighting" commemorative print in appreciation for your contribution of $30 or more. Contribute $50 or more, and we'll send you two of these Trump keepsakes. Thanks, in advance, for your support.

P.S. Again, our "Never Stop Fighting" commemorative print is only available for a limited time. Don't miss your opportunity to receive this powerful keepsake as a reminder that, even though he's not in the Oval Office, President Trump won't quit on the America people. Also, your contribution will help Grassfire continue to empower our team members to stand for America's founding principles of life, liberty and limited government. Click here or on the banner below to receive one of these exclusive commemorative prints for $30 or more and two when you contribute $50 or more to help Grassfire build: