Former House Speaker calls on patriots to stand with the President and fight! 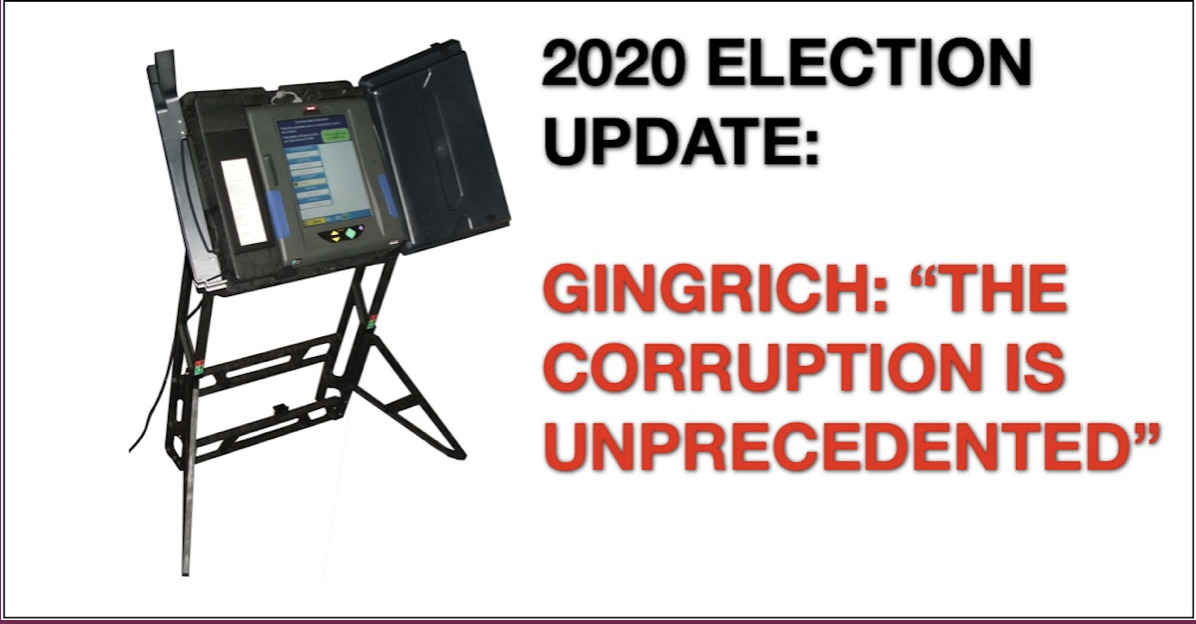 Yesterday, Grassfire staff received an email from former House Speaker Newt Gingrich (R-GA) on behalf of the President. The subject line caught our attention immediately: "The corruption is unprecedented." Gingrich insisted that it's time for grassroots patriots "to get MAD." He urged readers to "join President Trump and FIGHT for America's future." The former Speaker also wrote:

This Election is unlike any we have ever witnessed. The systemic corruption is breathtaking. The mainstream media, the Left-wing academics, and the entrenched Democrats will all ask us to roll over right now. There is voter fraud in this Election that MUST be reported and uncovered. President Trump isn’t backing down - nor should he - but he needs YOUR help to keep going. ... This is the moment that will decide everything

Since Election Day, Gingrich has been on the frontlines in the fight against radical Democrats trying to steal the 2020 vote. With that email, the former Speaker showed he was still "on the tip of the spear" in this battle. And after the response we've seen over the past two weeks, it's obvious that Grassfire Nation won't stop fighting for President Trump and for the integrity and legitimacy of this election!

That's why we're continuing to empower our team members to demand GOP lawmakers take strong, decisive action to "STOP THE STEAL!" In fact, Grassfire is giving you the opportunity to expand your impact, right now. We've updated our "STOP THE STEAL!" FaxFire by adding 16 key lawmakers in Georgia, Michigan, Pennsylvania and Wisconsin -- AT NO EXTRA COST!

Click here or on the banner below to fax your personalized message to those state legislators AND to all 53 Republican Senator (69 faxes in all) for just $30:

This was the Democrats plan since they began their COVID-inspired, vote-by-mail scams months ago! The Republican-controlled Senate and GOP leaders in the House MUST take immediate action to "Stop the Steal!" (To see a complete list of FaxFire targets and their contact information, click here.)

Grassfire's special, EMERGENCY FAXFIRE targets EVERY GOP SENATOR and 16 state lawmakers for just $30. That's more than 50% off our regular price! Go the extra mile by choosing LEVEL TWO and also reach House GOP leaders and ALL 37 members of the House Freedom Caucus. You can instantly send 108 faxes for ONLY $50!

Click here to help send a tidal wave of personalized, pro-Trump messages to state lawmakers in Georgia, Michigan, Pennsylvania and Wisconsin -- AND to House and Senate offices in Washington, D.C.!

Even if you've previously sent "Stop The Steal!" faxes, this is a great way to expand your impact. This fight is far from over! Take action now and deliver a wake-up call to elected officials with your faxes. Demand they keep working to defend your President and your vote. Thanks, in advance, for your support.

P.S. The Democrats' "Stop The Steal!" efforts aren't just limited to the White House. Now, GOP control of the Senate is also at risk! Take action now! Click here or on the banner below to schedule your faxes for immediate delivery:

P.P.S. If you haven't signed the national "Stop The Steal!" Petition, please click here. Join nearly 25,000 other Grassfire team members who are making their voices heard.